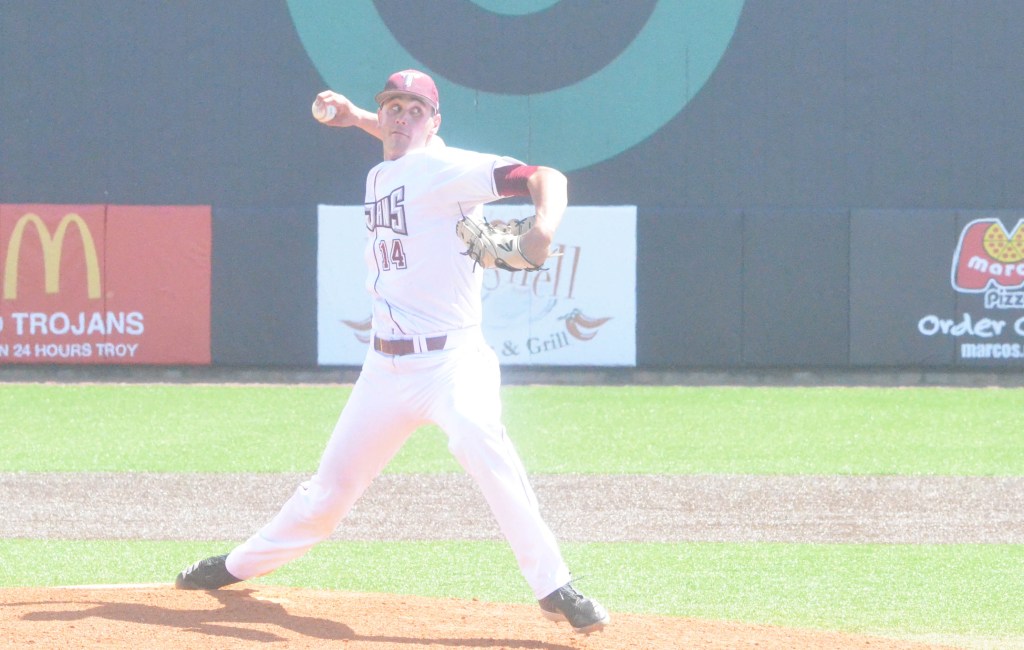 Photo/Mike Hensley Andrew Crane delivers a pitch in the third inning of Troy’s game against South Alabama on Friday afternoon.

After a postponement on Thursday evening, the South Alabama Jaguars and Troy Trojans began their series on Friday afternoon at Riddle-Pace Field. The Trojans picked up two key victories over the Jaguars by scores of 3-0 and 11-1.

The Trojans received a stellar pitching performance by starting pitcher Andrew Crane in his final appearance at Riddle-Pace Field.

After both teams were held scoreless in the first two innings, the Trojans broke the ice with a run in the bottom half of the third. Cole Prestegard led off the inning with a double to right field. After moving to third on a sacrifice fly by Manning Early, Prestegard scored on a single by Drew Frederic.

The Trojans added to their lead in the fifth when they tacked on two runs. Chase Smartt came around to score on a sacrifice fly and Frederic singled in Early to put the Trojans up 3-0.

Crane started the ninth in hopes of earning a complete game shutout. The senior walked two and allowed a single forcing the Trojans to bring in closer CJ Carter. The sidewinder picked up a quick strikeout to end the game.

The Trojans finished game one with 7 hits. Sanders and Frederic each picked up two hits, while Joey Denison, Prestegard and Early each picked up one.

Levi Thomas got the start for the Trojans in game two, but lasted just one inning after he allowed two walks and a double.

Jackson Cofer took over for the Trojan starter. Cofer pitched four innings and allowed two hits. He struck out five.

The Trojans left four batters on over the course of the first two innings of the game, including two in the second when they loaded the bases with nobody out. After an Early strikeout, the Jaguars forced an inning-ending double play.

The game remained scoreless until the bottom of the fifth inning when the Trojans broke the silence in a loud way. Early led off the inning with a walk and after a Frederic single, Brandon Lockridge sent a deep fly ball soaring over the left field wall to give the Trojans a 3-0 lead.

The Jaguars had a home run of their own in the sixth off new pitcher Rush Hixon to pull within two at 3-1.

The Trojans got the run back and then some in the bottom half of the inning. Sanders singled to center to drive in Sadler Goodwin. Sanders came around to score on a Frederic single to left to bring the score to 6-1.

The Trojans added their seventh run of the game on a sacrifice fly by Mosley. The Trojans had an RBI double and a two-run home run by Denison to blow the game wide open at 10-1 after eight. The Trojans scored their final run of the contest when Binder scored on a wild pitch.

The Trojans finished game two with 14 hits. Frederic led the way with four hits, while Sanders finished with three and Goodwin had two.

The Trojans will close out the series and the regular season this evening beginning at 6.