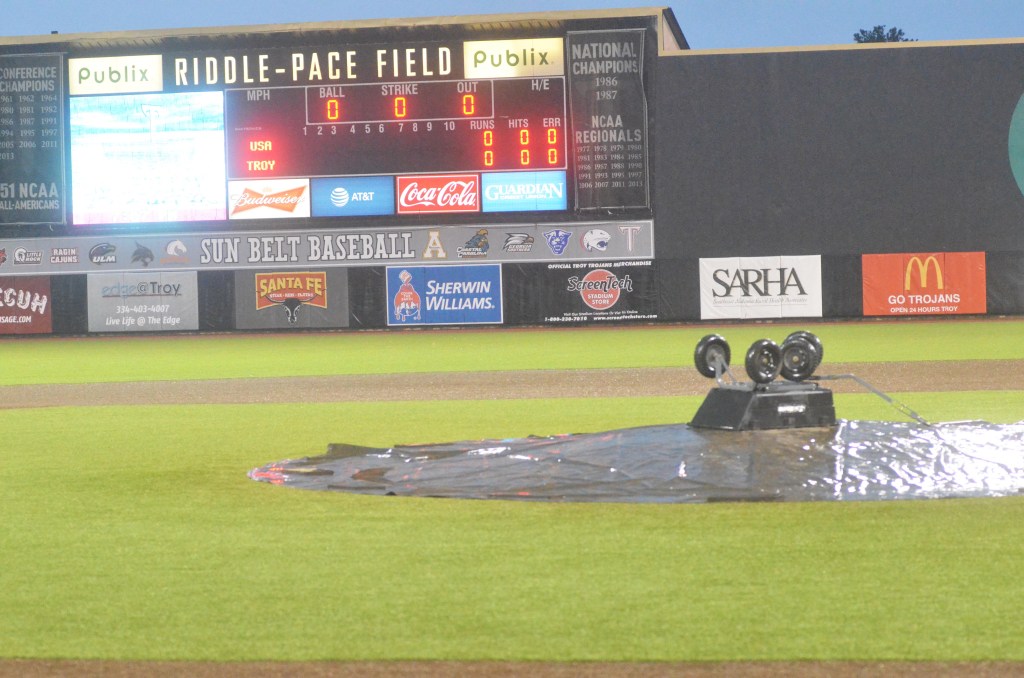 Messenger Photo/mike hensley Inclement weather postponed game one between Troy and South Alabama on Thursday night. There will be a double-header today beginning at 3 p.m. The Trojans and Jaguars will conclude their series on Saturday evening at 6 p.m. as part of senior day.

Fans that have been looking forward to Troy’s season-ending series against rival South Alabama will have to wait a bit longer after thunderstorms washed away baseball on Thursday night at Riddle-Pace Field.

Storms entered the Troy area around 5 p.m. on Thursday, leaving officials to ponder the status of the game. After pushing the decision to 7 p.m. and then 8 p.m., officials ultimately decided to wait until Friday.

The in-state rivals will play in a double-header beginning at 3 p.m.

The Trojans (36-17, 17-10) currently sit a half- game behind South Alabama for second place in the Sun Belt Conference Eastern division.

Both the Trojans and Jaguars have their sights on not only second place in their division, but the third seed in the upcoming conference tournament. A series win would clinch the spot for either team.

Andrew Crane is slated to pitch game one for the Trojans. The senior comes into the contest with a 5-4 record and 3.30 ERA. Crane is coming off a start against ULM, in which he held the Warhawks to just one run over the course of 6.1 innings. He allowed eight hits and struck out eight batters. The Jaguars will send Tyler Carr to the hill. Carr is 8-2 with a 3.43 ERA.

Crane is scheduled to be followed on the mound by Levi Thomas (2-0, 0.93) in game two and Daren Osby (6-1, 4.62) in the series finale. All three will try to stymie a potent South Alabama offense.

Following today’s double-header, the series will conclude on Saturday at 6 p.m.