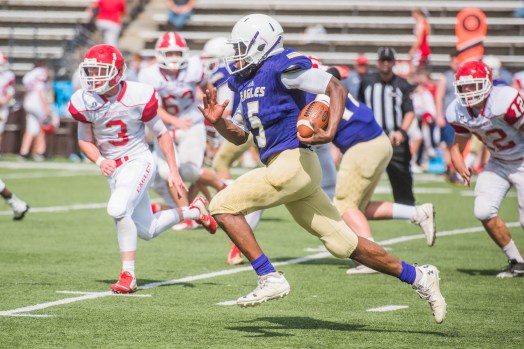 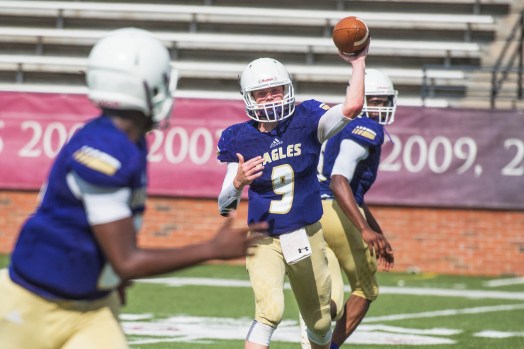 Day two of the 2018 Troy Cable Spring Football Classic kicked off on Friday afternoon with the Goshen Eagles taking on Pleasant Home.

The Eagles finished off their historic run to the Class 2A semifinals a season ago. On Thursday, the new-look Eagles knocked off Pleasant Home 38-0.

“A lot of new faces out there,” said head coach Bart Snyder. “These guys stepped up and did a real nice job. A lot of young guys have stepped up and done some things that we needed to see.”

The Eagles lost a great deal to graduation, so Thursday’s scrimmage was used to gauge the new leaders.

“I’m very proud of the leadership of our juniors that are now seniors,” Snyder said. “This is their team and they did a real good job. I am real proud of what we saw.”

Galloway finished the game completing all five of his passes for approximately 72 yards. He also had a rushing touchdown.

“He didn’t make any mistakes,” Snyder said. “He was very consistent with what he was doing. He put the ball where it was needed. We got some guys that can catch and we will be able to spread the ball out. He is going to be able to run the ball so people are going to have to pay attention. If they don’t, he will be able to throw the ball over their head.”

Dawson finished his afternoon with 69 yards on the ground.

“Caleb is going to be really good,” Snyder said. “He is a good leader. You saw what he can do offensively and defensively. He had a real good game today.
The Eagles picked up right where they left off a season ago, with an eight-play scoring drive. Starting quarterback Bryan Galloway completed three passes for 40 yards including a shovel pass to Jamarcus Sanford for 23 yards. Galloway finished off the drive with a 9-yard touchdown run. Khristian Andrews caught a pass in the end zone for the two-point conversion to put the Eagles up 8-0.

Galloway made an impact on the defensive side of the ball when he picked off a pass and returned over 60 yards for his second touchdown of the afternoon. Galloway couldn’t convert the two-point conversion keeping the score 14-0 with 4:06 remaining in the opening quarter.

Tamarcus Shipman recovered a fumble on Pleasant Home’s corresponding drive setting up the Eagles on the Pleasant Home 30. Caleb Dawson took a handoff around the left side for a 12-yard touchdown. Following a two-point conversion the Eagles extended their lead to 22-0 with 1:32 remaining in quarter number one.

The game went into the half with the Eagles holding the 22-0 lead. Galloway finished the half completing four passes for 58 yards, many of which came via the shovel pass.

Caleb Dawson led the Eagles on the ground with approximately 34 yards on three carries.

The second half was for the Eagle reserves.

The Eagles took the opening possession of the second half 75 yards for a touchdown. Shipman took two yards for the score and after a Galloway sneak for a two-point conversion, the Eagles upped the score to 30-0. The eagles had a 32-yard run by Dawson and a 36-yard completion by JaMarkus Sanford to set up the touchdown run.

The Eagles closed the scoring with an interception returned for a touchdown by Dawson to put the Eagles up 38-0.

The Eagles will now turn their sights to the summer and the start of preseason practice.

“We have to become self-disciplined enough to where if we are not at school- we can’t have the ego to where we don’t have to run. We have to have the confidence that we need to run when someone is not around us.”