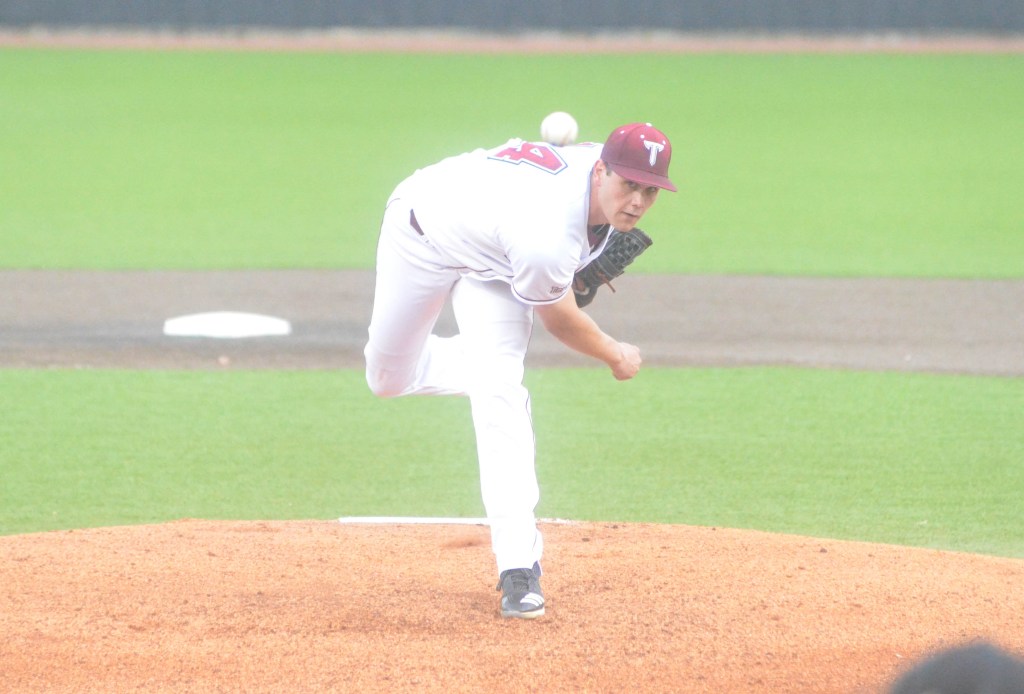 Messenger Photo/mike hensley The Troy Trojans host South Alabama in a key series starting tonight at Riddle-Pace Field. Above: Andrew Crande delievers a pitch for the Trojans earlier in the season. Crane will get the start game one against the Jaguars.

The Troy Trojans improved their case to receive an at-large bid in the NCAA Tournament with a 9-5 win over No. 22 Auburn on Tuesday night at Riddle-Pace Field.

The win for the Trojans improved their record on the season to 36-17 and they now face a pivotal three-game season-ending series against rival South Alabama.

Many believed the Trojans needed to finish the final week of the season with three wins in order to firmly stamp their place in the postseason. With their win over the nationally ranked Tigers, they’re off to a good start.

“I’m really proud of the win,” said head coach Mark Smartt. “It was an important win for a lot of reasons. Most important to me, we swept the weekend, we had a really nice win tonight and hopefully that will piggyback into our series with South Alabama.”

“We knew it was a big week for us,” Joey Denison said. “It’s going to be big for us going into the weekend with that win. We are going to be riding in on a high note. We got a quality win under our belt.”

The Trojans are currently ranked 40 in the latest RPI poll. Going into Tuesday night’s loss, the Tigers were ranked 12 in RPI.

“That is a really high RPI team,” Denison said. “We need those high RPI wins if we are going to try and get an at-large bid.”

Along with their 36-17 overall mark, the Trojans sit at 17-10 in conference play, good enough for third in their division. The Trojans are just half a game behind the Jaguars for second place and a half game up on Georgia Southern.

Andrew Crain will take the mound for the Trojans in game one. The senior sports a 5-4 record with a 3.30 ERA. Crane is coming off a start against ULM where he pitched 6.1 innings and allowed just one run on eight hits. He struck out eight batters.

With so much riding on the final series of the regular season, Coach Smartt has a simple game plan.

“Win game one on Thursday,” Smartt said. “That is our only focus. We have to be prepared to play a really good South Alabama team. Their experience matches our experience. We are both older, we are going to have to pitch well. They are a really good offensive baseball team. They are a heavy left-handed offense which is a challenge for any team. If we don’t play well, it’s going to be a challenge to win.”

The Jaguars enter the season-ending series with a 17-9 conference mark and are 29-21 overall. The Jaguars are coming off a 12-9 loss to Southeastern Louisiana, but they swept Texas-Arlington over the weekend.

“The immediate goal is to be the best team in the Sun Belt Conference,” Denison said. “We are fighting for the third seed right now. If we can get a series win against South Alabama, that will put us in a better spot in the tournament. So that is really the focus right now.”

The Trojans will begin the series this evening beginning at 6 p.m.

“Regardless of the outcome, I know my team will be ready to play at 6:00,” Smartt said. “They will be prepared for the opportunity and hopefully we will go play our best baseball.”