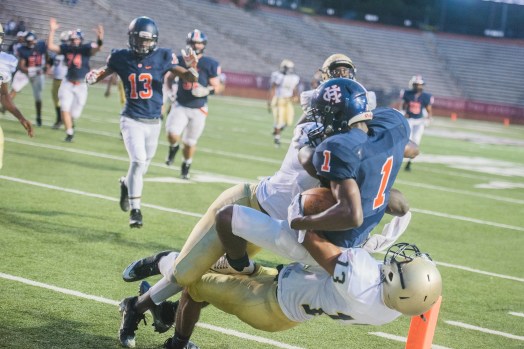 Photo/Jonah Enfinger DQ Toney dives into the end zone for Charles Henderson's only touchdown of the night. 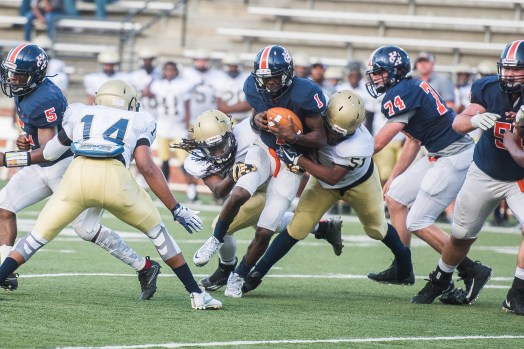 Photo/Jonah Enfinger DQ Toney runs with the football for Charles Henderson during their game against Early County in the Troy Cable Spring Football Classic on Wednesday night. 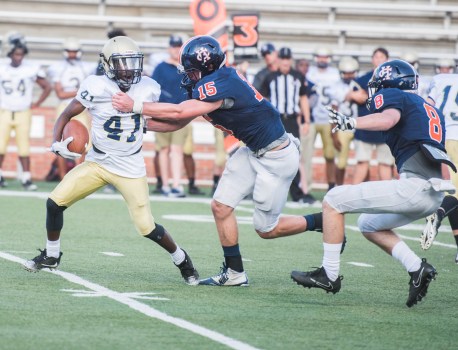 “I am proud of our boys,” McCoy said. “We had a good five to six months since we started our offseason program. I think the offense wishes they had three of those plays back. We had some open receivers that we couldn’t connect on. DQ (Toney) threw a pretty ball two times just had too much on it.”

It is often said of preseason games that the offense is always behind the defense and that appeared to be the case tonight for McCoy and the Trojans.

“That’s how it is,” McCoy said. “Sometimes the offense is a little behind the defense. The defense played a heck of a football game tonight.”

Every player wearing the dark blue uniforms got in the game for the Trojans during the contest.

“I am really proud of that,” McCoy said. “We have a lot of walk-ons and new guys that are coming out. We are trying to figure out where they are going to contribute.”

The first quarter went by with neither team cracking the scoreboard. Both team’s opening drive were fairly lengthy. Early County had a seven-play drive and Charles Henderson came back with a six-play drive. The biggest play for either team in the opening quarter came by Trojan running back Chance Pollard who rumbled his way for a 25 yard carry down to the Bobcat 22 yard line.

That drive stalled early in the second quarter when Caleb Guice missed a 30-yard field goal.

Starting quarterback DQ Toney completed one of his 11 passes. His completion went to Robert Grady for six yards.

Pollard led the Trojans on the ground with approximately 29 yards in the opening half.

The Bobcats took the second half’s first possession and scored the game’s first points on a 31-yard field goal to go up 3-0. The Bobcats had their second run over 20 yards to set them up inside the Trojans 35.

Pooka Jones took over at quarterback in the third quarter for the Trojans, allowing Toney to move to wide receiver.

“Pooka has had two years without football,” McCoy said. “Had a really good middle school career. He decided to come back to us, which I thought was a really good decision. Of course when Pooka comes in the game at quarterback DQ will move to X and (Jacorian) Boykins will go to Y.”

Jones caught the first pass thrown in his direction and was able to tack on a 15-yard late hit penalty to set the Trojans up inside the Bobcat 30.

Toney finished off the drive with a 17-yard touchdown catch to put the Trojans up 7-3 with 3:06 remaining in the third.

“We were able to connect,” McCoy said. “DQ made a great play in the corner of the end zone.”

The Trojans will take the next few weeks off before reconvening on June 4 for summer workouts.

“We will watch the video tonight (Wednesday) and show the kids in the morning,” McCoy said. “They will take some good and some bad (from the video). I think the key is getting them back on June 4 with the right mind set to get better each and every day and not try to do to much early.”