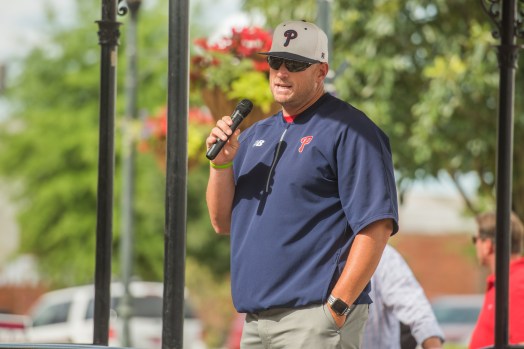 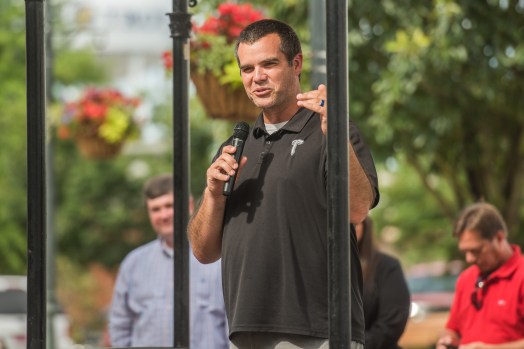 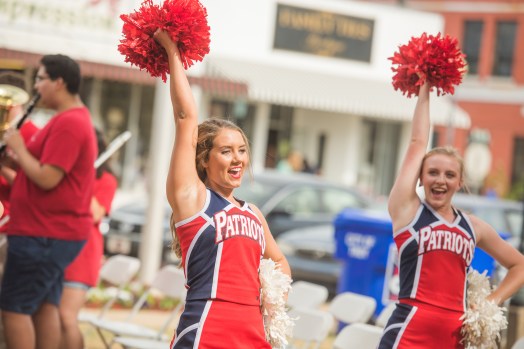 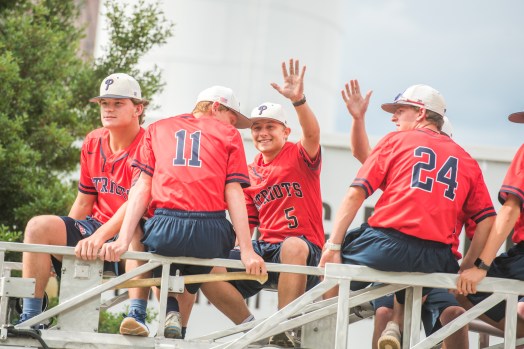 The City of Troy honored the Pike Liberal Arts Patriots baseball team after they won the state champsionship last Wednesday in Montgomery. Above: Patriot players wave to the crowd from the top of a fire truck on Tuesday afternoon. 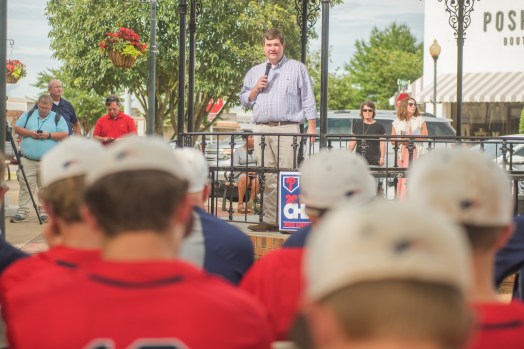 Photo/Jonah Enfinger The City of Troy honored the Pike Liberal Arts Patriots baseball team after they won the state champsionship last Wednesday in Montgomery. Mayor Jason Reeves addressed the audience during the celebration. 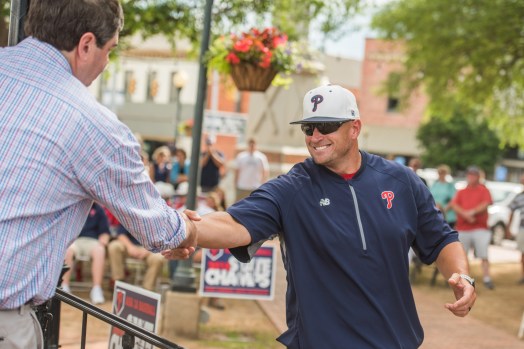 A special ceremony was held on The Square in downtown Troy on Tuesday afternoon to honor the 2018 state champion Pike Liberal Arts Patriots.

The Pike Patriots claimed their first state championship since 2012 one week ago when they swept the two-time state champion Glenwood Gators.

“I have already said pretty much everything there is to be said about this team,” said head coach Allen Ponder told the audience. “It was a great year. This is an outstanding group of kids that are very easy to work with and coachable. They do everything the right way, they play hard and they are the type of team that never feels they are out of a baseball game and we proved that all year long.”

Residents of Troy including friends, parents and coaches were all on hand to help celebrate the state championship.

“This is outstanding,” said Pike Athletic Director and head football coach Gene Allen. “Everybody wants to come and be a part of it. Several people couldn’t come to the game, but any time you can bring some notoriety to your town is great. I am glad it is something that everybody could come out and be a part of.”

Mayor Jason Reeves was on hand to lead the festivities.

“We are so proud of them,” Reeves said. “It’s really been a privilege for me having boys about their age to watch them grow up and play ball. At different times, I think I have seen them all through the years and for it to culminate with a state championship is a once in a lifetime type deal.”

City Council President Marcus Paramore and council member Stephanie Baker were also in attendance to celebrate along with the Patriots.

Each member of the team along with Headmaster Rebecca Baggett and coach Allen were given a certificate along with a drink container with state champions scripted on the side.

After the introductions of all the players and the coaches, Mayor Reeves gave the three seniors in attendance, Reed Jinright, Wood Jinright and Cason Murphree, a chance to address the crowd.

“We live in a great community,” Reed Jinright said to the crowd. “This is a great baseball town and I am glad we got a championship for your guys. It’s special to be a part of this team.”

Even with all the success this season and after all the excitement, coach Allen state this is only the beginning.

“We do expect to do it again,” Ponder said. “We don’t expect this to be a once in a lifetime thing. We expect to be at Paterson Field every year. Our seniors laid the groundwork for that.”