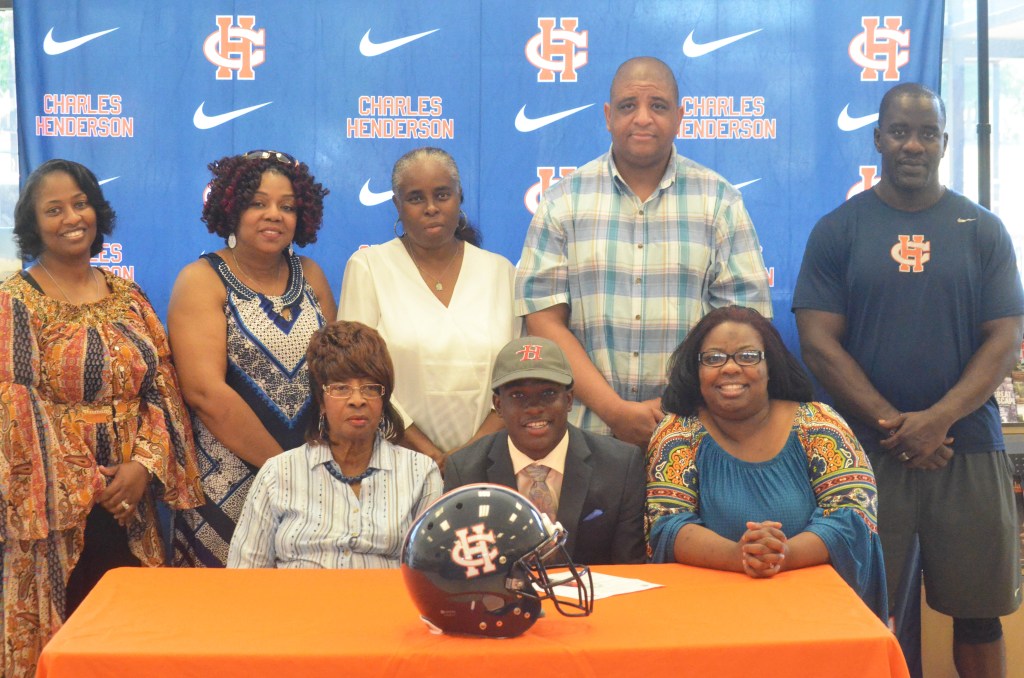 Cobi Jones became the eighth football player from Charles Henderson High School to sign a scholarship on Friday afternoon when he signed to play football at Huntingdon College in Montgomery.

“It’s a very exciting day,” Jones said. “It feels like all my hard work paid off. My family and coaches have always pushed me and I have always prayed to God. He answered my prayers.”

Jones has played football for as long as he could, and after all the practice and the long workouts, Friday’s signing made it all worth it.

“Coming in as a freshman, this was the day you dream of,” Jones said. “You work hard for all these years and earning a scholarship is just a blessing from God.”

Jones has been with head coach Brad McCoy from his days as a freshman. For McCoy, signing days are always special.

“This is number eight for us,” McCoy said. “That group we have had the last four years is special to me because it was really my first group. I have seen them grow since the ninth grade until now. The accumulation of all the hard work and teaching pays off.”

Jones was one of the freshmen when McCoy entered the halls of Charles Henderson High School.

“He is a unique guy because he is such a physical player,” McCoy said. “He can do so many things. He is a great offensive player with great a great skill set. He can block, he can catch, he can run and he can play pretty much every position.”

“Coach McCoy means a lot to me,” Jones said. “He helped me mold my character. I thank him for it because without him being on my tail about being a leader, I probably wouldn’t be standing here right now.”

“I talked with them a little bit,” Jones said. “We are going to try it out and see how it goes.”

Huntingdon is coming off a 9-2 season after they made it to the first round of the playoffs.

Huntingdon is located in Montgomery and the Joneses admitted that the close proximity and family atmosphere was a big factor on his decision.

Even with all the celebration on Friday, all the hard work is just the beginning for Jones.

“I am already working right now,” Jones said. “When I get up there I plan on starting. I don’t plan on sitting on the bench.”