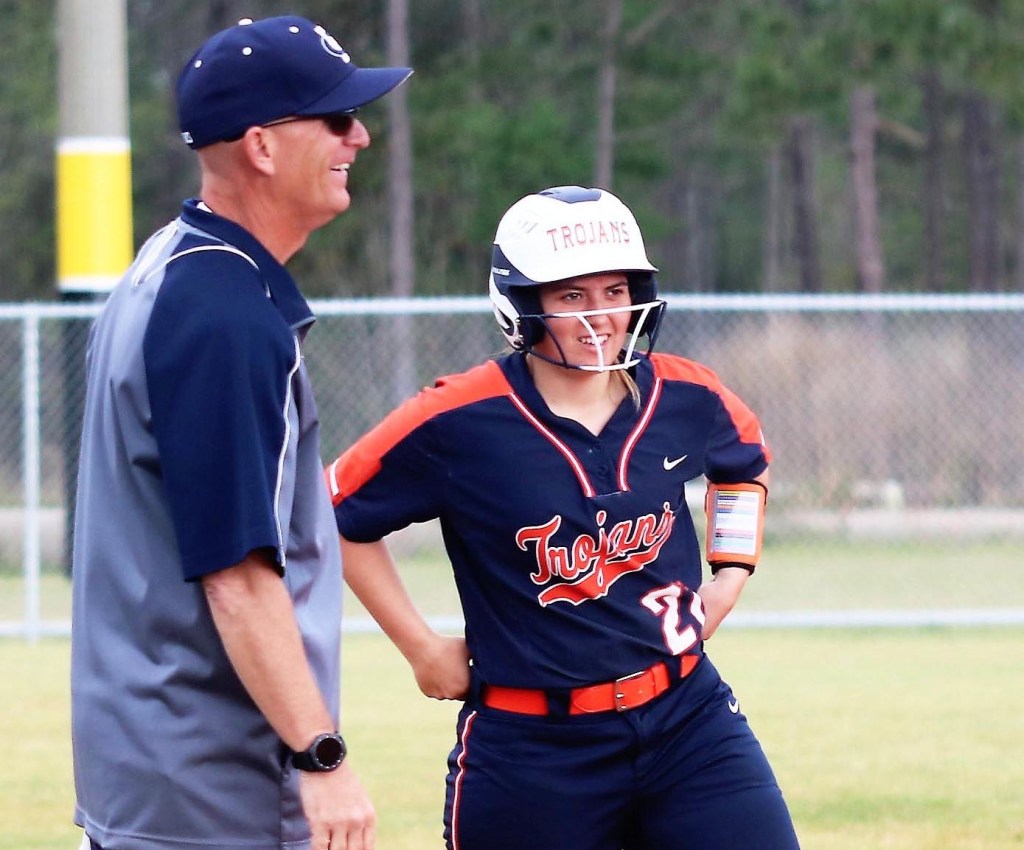 submitted Photo Charles Henderson head coach visits with one of his players during a game earlier this season. The Trojans will begin play in the regional tournament this morning in Gulf Shores.

After a lengthy layoff, the Charles Henderson Lady Trojans begin play in the Class 5A South Regional in Gulf Shores.

Last Monday was the last time the Trojans saw any action and head coach Robin Snyder hopes his team is ready to go.

“It’s up to the girls now with all the practices and the preparation. It all comes to a head here now,” Snyder said. “If they are capable of playing the way they are playing, I think can we be a good team.”

During the week off, the Patriots have focused on getting back to the basics to ensure they enter the postseason playing their best ball.

“It’s about staying focused and playing good defense and being selective at the plate,” Snyder said. “If we hit the ball and put the ball in play and make the other team work, then you always give yourself a chance.”

Snyder believes his team’s Achilles heel this season has been striking out too much and committing errors.

“The main thing is staying mentally focused in the field and at the plate,” Snyder said.

The Trojans sent a main group of three to the pitching circle during the tournament in Emma Kirkpatrick, Molly Kate Sanders and Sydni Garrett.

“They have done a good job for us all year long,” Snyder said. “We don’t have what I consider to be a shutdown pitcher like other teams have. We have pitchers that other teams would like to hit. They are going to hit ground balls and fly balls, we just have to do our job. They have always done a good job at throwing strikes and giving us the best opportunity they can to win games.”

The Trojans will take on Area 2 runner up Citronelle in game one of the tournament.

“I don’t know a lot about them,” Snyder said. “Their record isn’t a strong record but that doesn’t mean anything; they could’ve have injuries.”

Faith Academy, Eufaula, Jackson, Brew Tech, Rehobeth and Saint James will join the Patriots and Citronelle in the tournament.

“We don’t necessarily worry about the other teams,” Snyder said. “We worry which of our teams show up. If we show up like we are supposed to, we feel like we can play with anyone in the state.”

The Trojans will take on Citronelle beginning at 9 a.m. A win will give the Trojans a 4:30 p.m. start while a loss will force the Trojans to play again at 3 p.m.