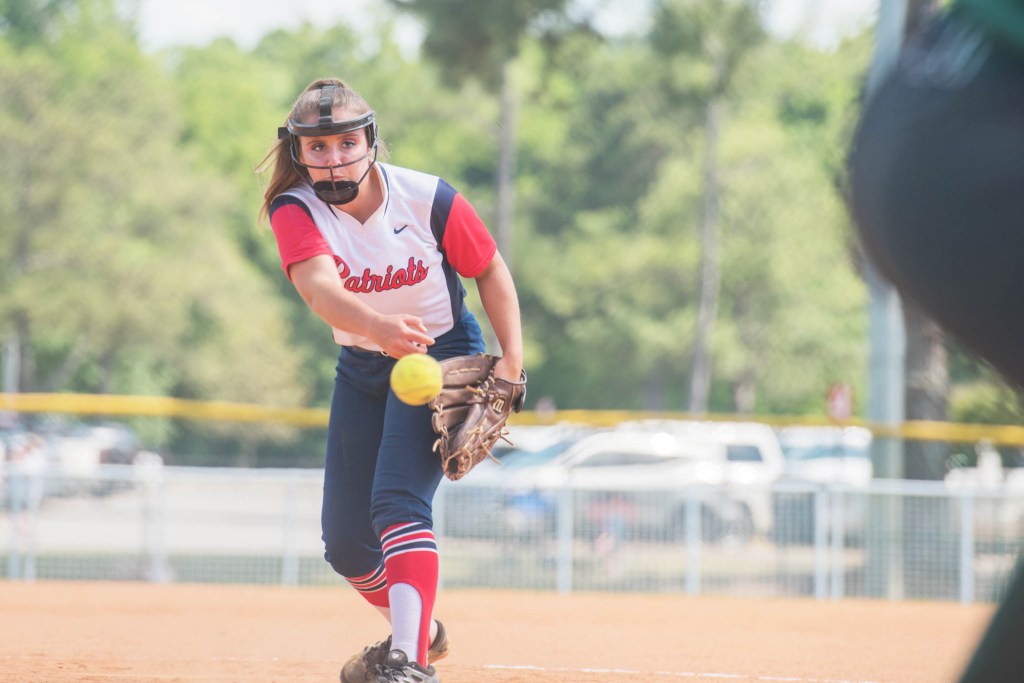 Messenger Photo/jonah enfinger Dannah Dawson delivers a pitch for the Pike Patriots against Hooper on Friday afternoon. After picking up three wins over the two-day tournament, the Patriots finished the state tournament in third place.

The Pike Liberal Arts Patriots advanced to day two of the AISA Class 3A State Tournament over the weekend, but their season came to a close with a 5-0 loss to the Glenwood Gators.

The Patriots were able to muster three wins in the tournament, which landed them a third-place finish in the state.

“I thought our girls did really well,” said head coach Robert Rollan. “I was really pleased with how well they played and proud of how they battled throughout the tournament. We played good defense, we worked hard and our girls pitched well. For our team being as young and inexperienced as we were in that setting, to finish third and be one of the last three standing, I thought it was really great for them.”

The Patriots began the day with a 5-3 win over the same Bessemer team that knocked off the Patriots in extra innings in round one.”

Starting pitcher Dannah Dawson continued what was a strong pitching performance all tournament long. Dawson pitched all seven innings and allowed just three runs on nine hits. Before their loss to Glenwood, Patriot pitchers surrendered five earned runs over the first four games of the tournament.

“A lot of what they do rides on with how they handle the ups and downs of the games,” Rollan said. “They handled the hits, they handled the walks, they handled the homeruns and they kept throwing strikes. That is kind of what I want to see. I want them to be competitive enough to where, no matter what happens, I am going to go up there and challenge you. I saw that this weekend.”

The Patriots picked up 9 hits in their win over the Bessemer Rebels the second time around. Ashelyn Atwell went a perfect 3-3 at the plate, while Haleigh Dewberry picked up two hits of her own along with an RBI.

Ally Rushing and Dawson both got on the mound in the Patriots’ loss to the Gators on Saturday. Rushing pitched the first four innings, while Dawson wrapped up the final two.

“Even against Glenwood we had opportunities; we just couldn’t put the ball in play,” Rollan said. “We seemed to be behind the ball. We may have had one ball hit on the left side of the infield. Everything was to the right side; we just couldn’t catch up to the ball.”

Despite the loss, the Patriots have a lot to look forward to moving into the offseason. The Patriots say goodbye to just three seniors in Dewberry, Jordan Grice and Katelyn Dendy.

The Patriots will return all three of their main pitchers from this year’s squad including Dawson, Morgan Bundy and Ally Rushing. Dawson and Bundy will be sophomores, while Rushing will be just a freshman. Rollan believes with another summer in the weight room, her young players will continue to take another step forward.