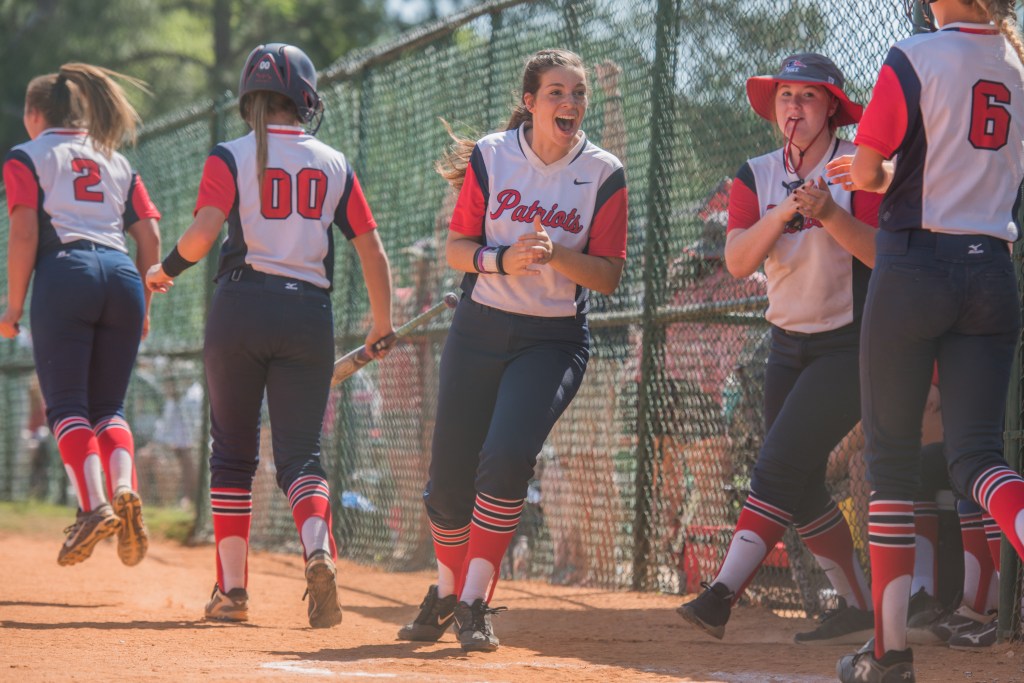 After dropping game one 4-2 in extra innings, the Patriots knocked off Hooper 2-1, again in extra’s and advanced to day two after beating Springwood in game three 7-1.

“I felt like they played really well today,” said head coach Robert Rollan. “Even in the first game against Bessemer. It was a very disappointing loss, but we played well for seven innings. You have to give Bessemer credit. We came back against Hooper and won it in ITB (International Tie Breaker). This game (Springwood) we settled down and played. We are playing really good. We have to come back and do it again tomorrow.”

The Patriots’ pitching staff was stingy all afternoon long. They gave up a total of four runs over the three games and Rollan credits that to throwing strikes.

The Patriots led for most of the ball game until Bessemer rallied for two runs in the top of the eighth inning to claim the two-run win in extra innings, sending the Patriots into the loser’s bracket.

Ally Rushing got the start for the Patriots and lasted all eight innings to pick up the loss. Rushing allowed three total runs, two of which were earned on five hits.

Bessemer evened the score in the seventh, sending the game into extra innings.

Game two was the same story, but a different outcome. The Patriots trailed for the first five innings, but came back to win in extra innings.

Dannah Dawson got the call in the critical game. The freshman pitched all eight innings and allowed just one run.

The Colts got on the board in the third. The Patriots committed two errors in the frame that led to the Colts only run of the game.

The Colts had the opportunity to add to their lead in the fifth. They had runners on third and second before lining out for a double play.

The Patriots scratched across their first run in the sixth. Atwell and Bundy both picked up one-out hits in the inning. Dewberry smacked a single to score Atwell to tie the game.

Extra innings allowed both teams to put a runner at second base to start the inning. After the Colts stranded their runner, the Patriots didn’t squander their opportunity. Rushing was placed on second base and moved to third on a sacrifice bunt by Atwell. Bundy followed and hit a shot to second base that the second baseman couldn’t handle, allowing the Patriots to score the winning run.

With their season again on the line, the Patriots scored early and often against Springwood to advance to day two.

Bundy got the call as the starter. The freshman pitched the first five innings without allowing a run. Ally Rushing locked down the final two innings to secure the win for the Patriots.

The Patriots began their scoring in the third when Dewberry smacked a two-run homerun to left to put Pike up 2-0. The lead mushroomed to 4-0 later in the inning when Sarah Elizabeth Calhoun grounded out to second to drive in Grace Rushing.

Rushing knocked in a couple of RBI of her own when she singled to drive in Bundy and Dewberry to stretch Pike’s lead to 6-0.

After Springwood scored their first and only run in the sixth, The Patriots got it back in the bottom half of the inning when Dendy scored on an error.

The Patriots will be back in action this morning beginning at 10 a.m. The Patriots will have a tall task ahead of them on Saturday. They would have to win four games to claim the championship.