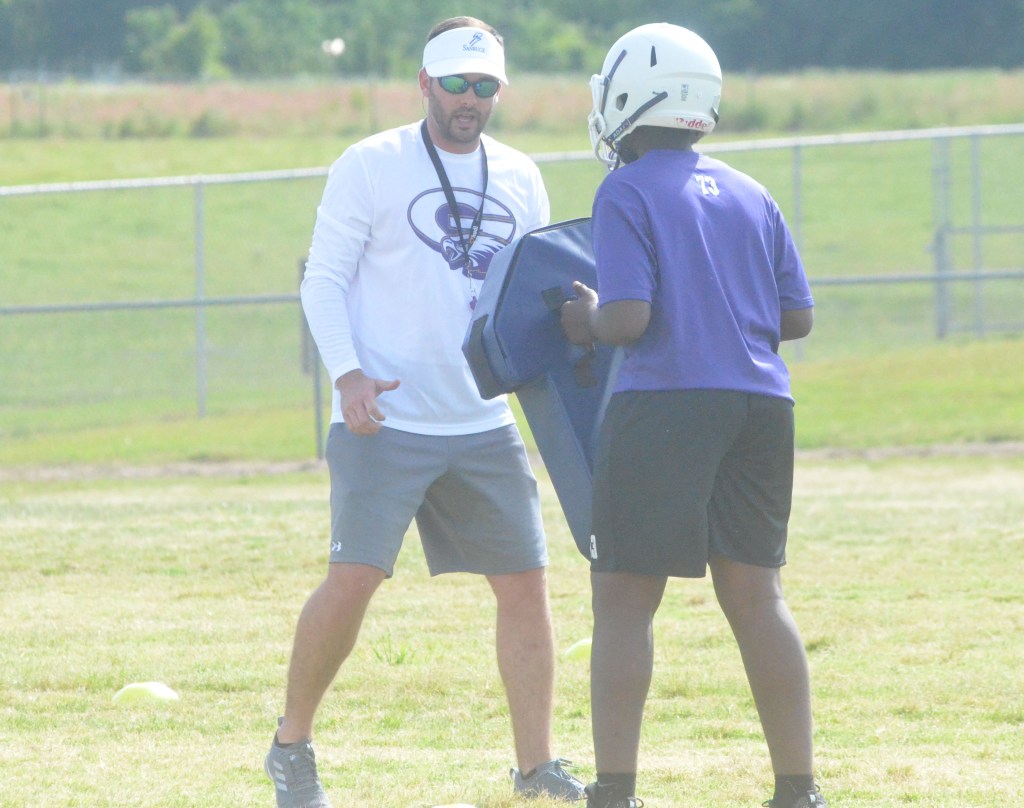 The Goshen Eagles began spring practice this week at Eagles Stadium. After a historic run to the semifinals last season, the Eagles are tasked with rebuilding their roster this season. Above: Offensive coordinator Ethan Carroll runs a drill with a player.

The Goshen Eagles football team had a historic run a season ago. After making it to their first ever semifinal round, the Eagles are back on the field for spring practice.

The stars were all aligned a season ago. The Eagles had nearly two-dozen seniors, all which went through the battles of a football season. The experience paid off all the way to the final four.

Even though the Eagles ultimately came up short, the seed was planted for a new crop of Eagle players to continue the pace in 2018.

“We have a lot of new faces, which is a good thing,” said Eagle head coach Bart Snyder. “We lost a lot last year, but we have a lot coming back. The coaches have done a good job at teaching folks the last several years, so we feel like we will be in that reload process and we are excited about that.”

Whether you’re a veteran-laden team or a squad full of new faces, spring is always about one thing for Snyder.

“Spring is about preparation for the fall,” Snyder said. “That is what we are doing.”

The Eagles have been in this situation before. Even though they had a strong core a year ago, the Eagles were tasked with filling in the gaps with new faces. The year before that, the Eagles had a brand new offensive line to work with.

“That is high school ball,” Snyder said. “It’s at all levels really. High School football is playing the cards you have been dealt. The coach can play with those cards and get the most out of it. That’s what we are going to do.”

Snyder plans to teach the small, fundamental things this spring and hopes the guys will be able to return come fall and he can polish things off heading into the season.

Snyder does have players returning. Some to keep an eye on are Bryan Galloway, Tre Dix, Caleb Dawson, Will Little and Jamarcus Sanford.

One of the multiple positions the Eagles are tasked with finding a replacement is at quarterback. Brock Snyder is heading to Faulkner to play quarterback and former number two quarterback Galloway will get plenty of reps this spring.

“Bryan Galloway was our number two guy last year,” Snyder said. “He got a lot of reps. Of course we will be working in some other guys at it. We have Connor Berry that will be doing some stuff and we have Will Snyder doing some stuff.”

The Eagles will have the opportunity to put their fundamentals to the test at the end of the spring when they take on Pleasant Home in the Troy Cable Spring Football Classic at 3 p.m. on May 17.

“It will be fun,” Snyder said. “Coach Mercer and Pleasant (Home) are doing a lot of work. They are a couple days ahead of us. I am very excited about that and their willingness to play us. Getting to play at the university is great. Troy Cable, Troy University and Charles Henderson have done a great job at making it an exciting thing and just glad that we can be a part of it.”