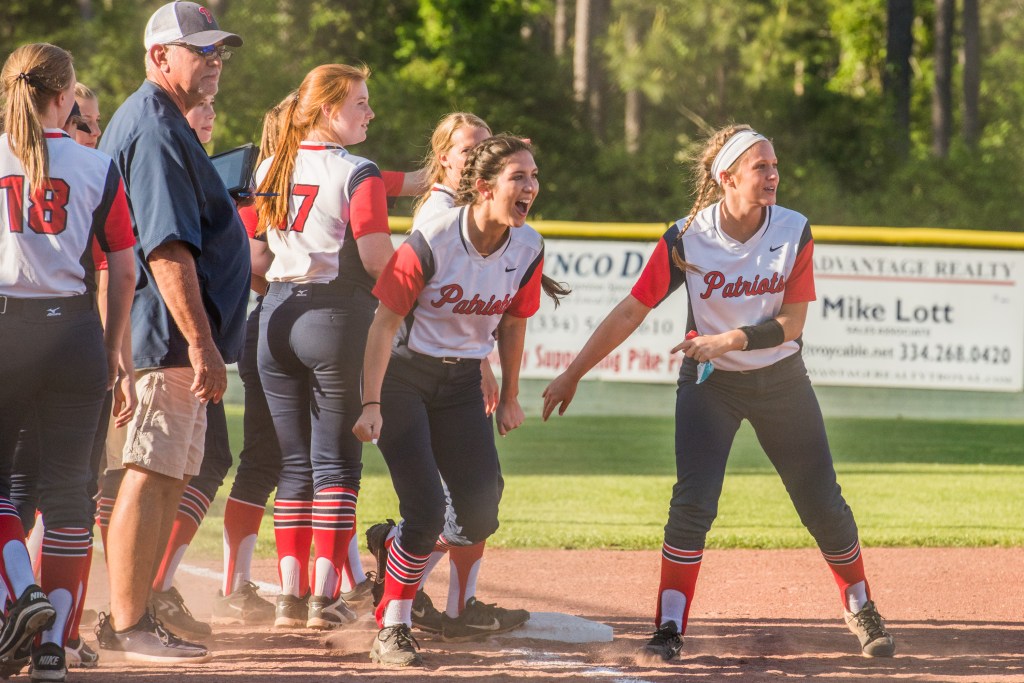 Photo/Jonah Enfinger The Patriots celebrate after a walk-off win over Springwood earlier this season. The Patriots begin play in the State Tournament this morning.

The Pike Liberal Arts Lady Patriots begin play in the 2018 AISA Class 3A State Tournament this morning at Lagoon Park in Montgomery.

“We played really well against Hooper and hit the ball really well,” said head coach Robert Rollan. “I felt like going into the Monroe game that we were sitting in good shape. Monroe played really well, probably the best I have seen them play all year; we didn’t make many adjustments that we needed to make at the plate for us to be successful.”

Despite the loss in the regional final, Rollan is very pleased with where his team is.

“I just like the way we are playing right now,” Rollan said. “We are playing real well, playing good defense. We had a good week of practice and I just think going into this tournament we are going to be more prepared than we have been.”

The Patriots are guaranteed to play in two games on day one. They hope they keep it right at two to stay in the winner’s bracket heading into Saturday.

“With any team it’s about good pitching and good defense,” Rollan said. “If you can limit the other team to hitting and scoring early and you can get on the board early and get rid of some of the nerves, I think that is a big part of it.”

The Patriots draw third-seeded Bessemer in game one. The Patriots and the Rebels have not met this season.

“I don’t know much about them,” Rollan said. “We are kind of going into it blind. Hopefully we can put together a pretty good game.”

The Patriots and Rebels will square off at 10 a.m. on Field 2 of Lagoon Park. The winner will play again at 4. The loser will turn around and play again at 2 p.m.