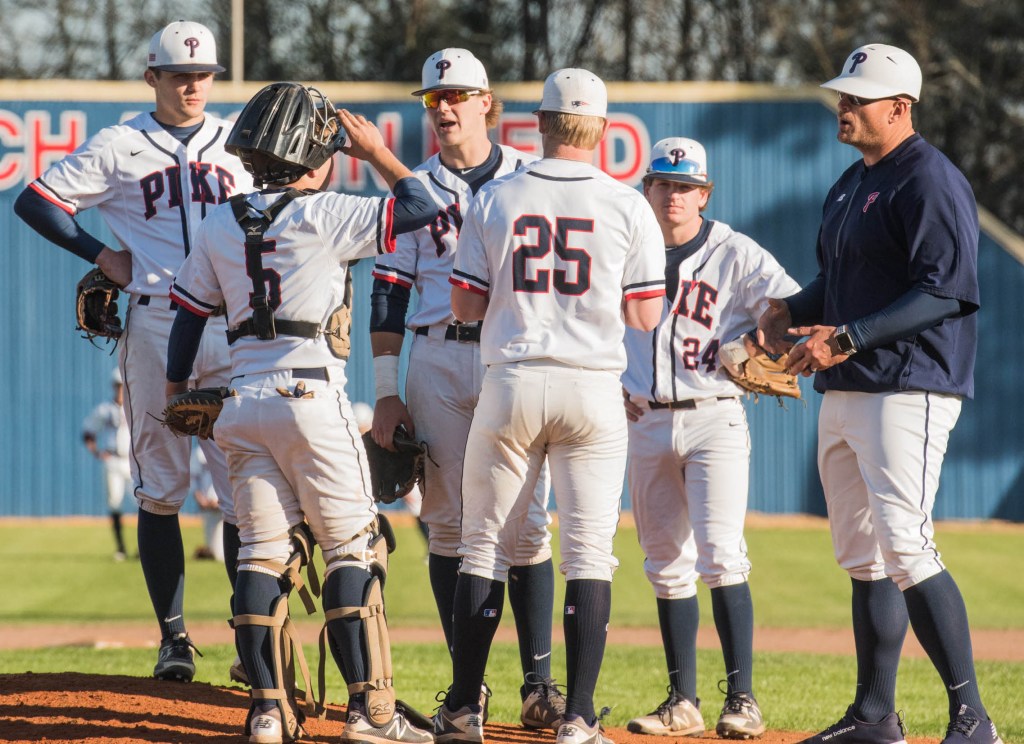 The Pike Patriots split day one of the semifinals on Wednesday night. They will play the third and deciding game this afternoon beginning at 4 p.m.

With their season on the line, the Pike Patriots knocked off the Tuscaloosa Knights in extra innings on Wednesday night.

Tuscaloosa and the Patriots split the first two games of the Class AAA semifinals. The Knights took game one 5-1 before the Patriots stayed alive with a 5-4 nine-inning victory in game two.

“It wasn’t a fun one to start, but it definitely was a fun one at the end of the night,” said Patriot head coach Allen Ponder. “I am so unbelievably impressed with Tuscaloosa. Those kids have so much fight in them. They are a very scrappy baseball team. Our baseball team has the mindset that we are never out of a baseball game. We did a great job at the end of the game. It was a great team effort.”

Reed Jinright got the start for the Patriots in game one’s loss. The senior left-hander pitched the first five innings and allowed five runs, three of which were earned on four hits and six walks. Holt Steed pitched the sixth inning for the Patriots and did not allow a run.

Both Patriot pitchers were outdueled on the mound by Knight pitcher Trace Greene. Greene pitched a complete game and allowed just one run on four hits. All four of the Patriot hits came in the seventh inning.

The Knights did the bulk of their scoring in the third inning when they tallied three runs on two hits including a two-run double.

The Knights added a single run in both the fifth and sixth innings to increase their lead to 5-0.

The Patriots attempted to get back in the game in the seventh. Not only did they pick up all four of their hits in the frame, they scored their first run on an RBI single by Trevor Barron. The Patriots had the bases loaded with one out in the inning, but a Jade Sikes double play ended the threat.

The Patriots got a much-needed strong start by junior Jade Sikes in game two. Sikes pitched seven innings and allowed four runs, three of which were earned on four hits. Drew Nelson entered the game in the eighth and pitched two shutout innings while allowing one hit. He struck out four.

The Patriots, as the home team, scored the game’s first four runs starting in the first. The Patriots got on the board with an RBI groundout by Cole McWhorter.

In the second, the Patriots picked up two more runs on back-to-back bases loaded walks by Cody Hollis and Davis Allen to push their lead to 3-0.

Nathan Renfroe hit two homeruns in the deciding game against Lee-Scott last week and he was at it again in the third inning when he homered to left to increase the Patriots’ lead to 4-0.

The game remained even until the bottom of the ninth. Allen and McWhorter both reached with one out in the inning on a walk and a single. Wood Jinright hit a smash to second base that that second baseman couldn’t control. Allen never slowed down until he touched home plate for the winning run.

The Patriots and Knights will conclude their series this afternoon beginning at 4 p.m.