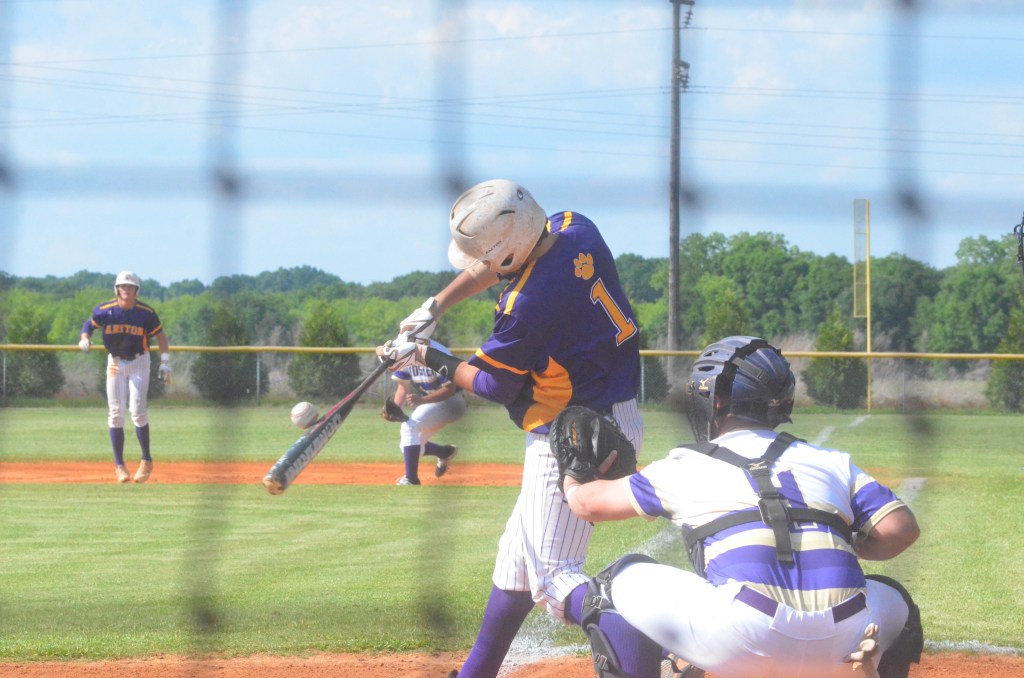 Ryan Tomlin squares up a baseball in a game between Ariton and Goshen on Friday night.

The Ariton Purple Cats advanced to the third round of the Class 2A state playoffs on Friday night when they swept the Goshen Eagles in the first two games of the best of three series.

The Purple Cats took game one comfortably 10-0 before pulling away in game two 11-1.

“It was a slow start in the second game,” said head coach Jonnathan Valdez. “The pitchers were able to find the strike zone. A little by little we were able to put some runs on the board and we were able to get it done.”

“I am proud of all of our players,” said head coach Robby Kinsaul. “It’s not like we came out and did anything that hurt us. We just couldn’t find a hole when we were batting. Again, a lot of credit goes to Ariton.”

The Purple Cats scored in all but one inning and got a stellar pitching performance by Joshua Herring. Herring pitched all six innings of the shortened game and allowed two hits and struck out eight batters. He struck out the side twice.

The Purple Cats jumped on the Eagles and scored two runs on two hits in the first inning. Ryan Tomlin drove in the game’s fist run when he singled in Bryson Peavy. Tomlin came around to score the second run on a wild pitch.

After a scoreless second, the Purple Cats added to their lead in the third when Peavy scored on a wild pitch after he doubled.

Things started to unravel a bit for Goshen starter Dalton Bunce in the fourth. The senior allowed three runs on one hit and he walked a batter.

Lucas Webb scored the innings first run on a ground out to short. After a balk call on Bunce advanced two runners in scoring position, Peavy singled in both runners to give the Purple Cats a comfortable 6-0 lead.

His next three came in the fifth when the Purple Cats had a bases loaded walk by Steven Maund and a two-run single by Landon Thrash to blow the game open at 9-0.

The Purple Cats scored their final run in the sixth on a single by Maund.

Ariton finished with nine hits led by Peavy and Maund who both picked up two.

The Eagles finished with two hits by Blake Childs and McGwire Stanley.

“He hasn’t pitched in a while and I knew he would be well rested,” Kinsaul said. “That is best he has looked all season.”

The Eagles scored their first and only run of the series in the third when Corey Peterson doubled in pinch runner Iyan Hinkle.

Things began to get away from Galloway in the fifth. The Purple Cats scored a total of four runs in the frame, two of which came on wild pitches and the Ariton took a 5-1 lead into the sixth.

The Purple Cats scored their final six runs in the sixth including a two-run homerun by Herring to end the ball game via the mercy rule.

With the win the Purple Cats advance to the quarterfinals where they will play the winner of Cottonwood and St. Luke’s.

“We definitely have to get better pitching,” Valdez said. “We have to command the strike zone. We have done a better job the last couple of weeks. Today was a little iffy, but I think we will get better at getting strike one.”

For Goshen the loss meant they had to say goodbye to their nine seniors.

“I am very thankful for our nine seniors for what they did the last three years for our program,” Kinsaul said.