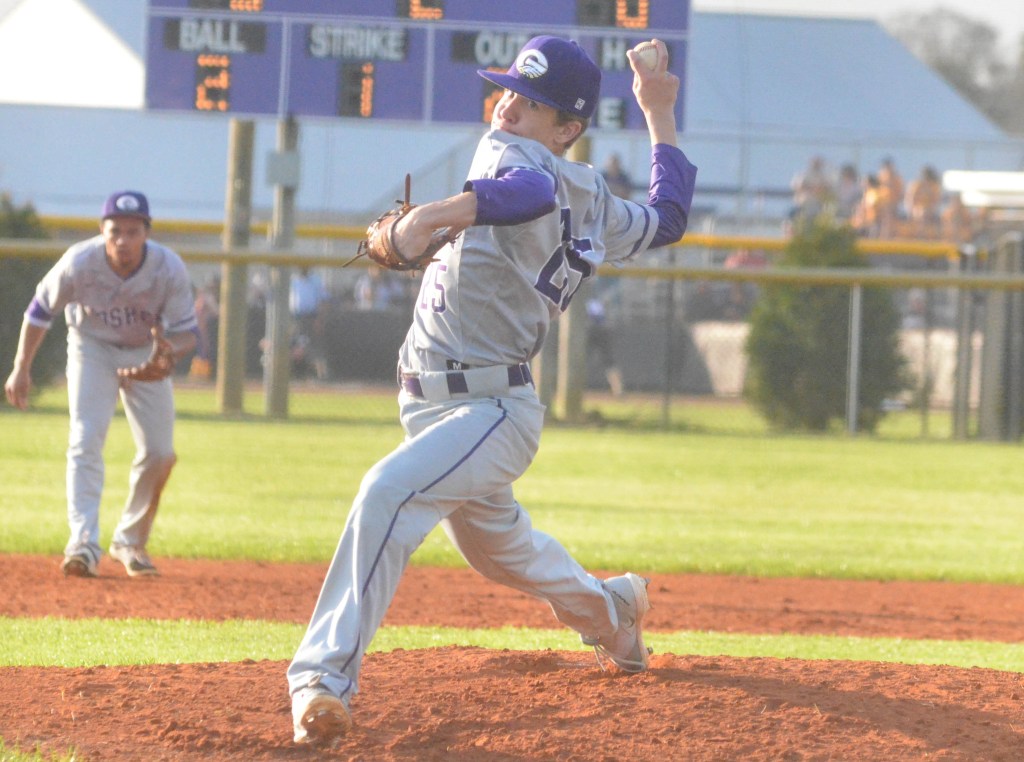 Photo/Mike Hensley McGwire Stanley delivers a pitch for Goshen in a game earlier this season. The Eagles will take on Ariton in the second round of the playoffs this afternoon.

It will be a festive atmosphere at Goshen High School this afternoon when the Eagles host the Ariton Purple Cats in the second round of the Class 2A state playoffs.

The Eagles swept Region 7 winner Keith in the opening round, while Region 5 winner Ariton knocked off Horseshoe Bend in three games.

The Eagles had their all-sport banquet earlier this week. Unlike the football and basketball programs, the Eagle baseball team celebrated what is currently occurring rather than what happened in the fall.

“It was different to have our banquet and still be playing baseball,” said Goshen head coach Robby Kinsaul. “It’s always a good thing. I am proud of that. The guys had a good two days of practice working on fundamental stuff and defensive stuff.”

The Eagles scored a total of 23 runs in the two games in round one, but Kinsaul believes his batters were out of rhythm. The Purple Cats have two starting pitchers in Carson Fain and Joshua Herring.

“I even made the point last week it was almost like playing slow-pitch softball,” Kinsaul said. “That will be a total 180 this week against Ariton. They have two next-level talent pitchers.”

The Purple Cats come into the series with a 21-9 record. Former Pike Liberal Arts junior varsity baseball coach Jonnathan Valdez is in his first year as head coach of the Purple Cats. He believes his team has played well all season.

“Things have been looking really good,” Valdez said. “We had some great games, some bad games and some average games this season. I have been focusing on my kids the entire year to build a new mentality. So far the kids have done a great job. They have been adapting to the new system.”

The Eagles will be going up against a familiar roster to a lot of the players. Quite a few players from both rosters competed on the football field last season. Kinsaul expects a battle from Ariton.

“They are ranked second or third in the latest poll,” Kinsaul said. “I think our guys are really familiar with them. They have a lot of guys that went to Pike Lib. They know each other. They are a very good program, always have since I have been here. Coach Jonnathan is a great baseball guy. He is very knowledgeable for this being his first year at Ariton.”

Both teams are known to have passionate fan bases, and with the game being played in Goshen, Kinsaul expects a big, passionate crowd that he believes will help his players in both the short and long term.

“I know we have a lot of seniors, but we also have 10 other guys that will be back next year,” Kinsaul said. “It’s good experience for them.  I’m glad we are able to still be playing, not just for our seniors, but for our whole team.”

Game one of the best-of-three series will begin at 4 p.m. Game two will start at approximately 6:30 p.m.