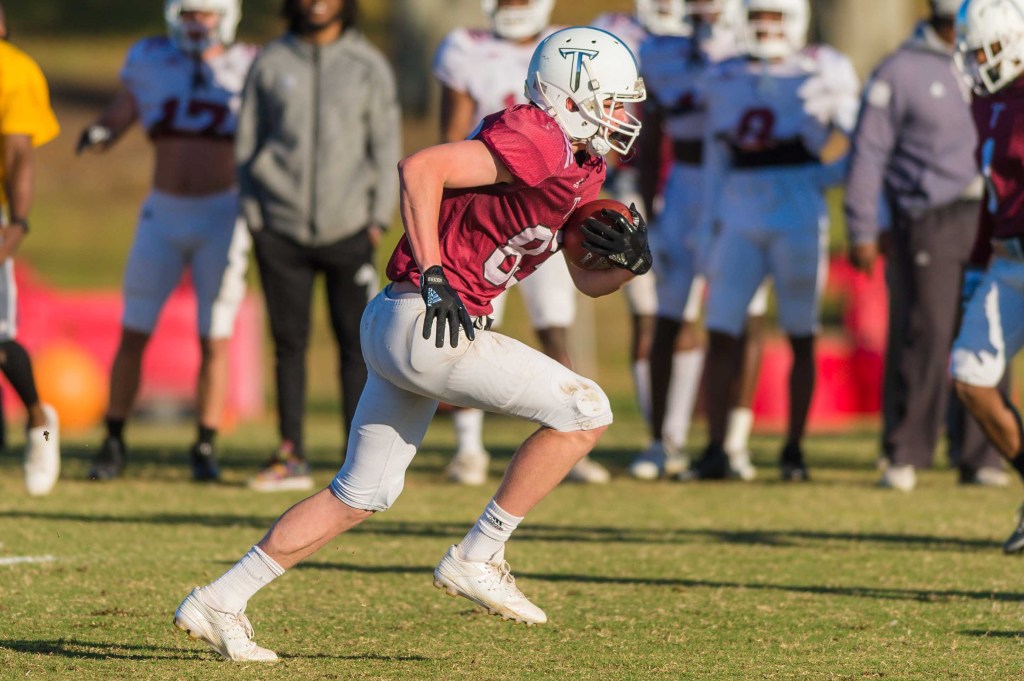 Submitted Photo Luke Whittemore goes up for a catch during a practice this spring.

Troy Trojan redshirt freshman Luke Whittemore turned heads thanks to a strong performance throughout spring practice and the T-Day game.

Whittemore caught the Trojans’ first touchdown pass of the annual T-Day game on Saturday to continue what has been a consistent spring.

“He has been our most consistent (player),” said head coach Neal Brown. “He has been out here everyday. He is a guy that’s steady and is really consistent catching the ball. He is a good route runner, a coach’s son and he understands how to play the game. I am excited for the role that he is going to take for us.”

Injuries played a big role for the Trojans throughout the spring. Wide receiver was one of the positions that have been hit the hardest. Whittemore was able to take advantage of his open playing time.

“That gave me an opportunity to come in and kind of prove myself,” Whittemore said. “Getting redshirted last fall, I had time to get stronger and get faster. That definitely prepared me for this spring. I am happy with how I prepared.”

Whittemore is a 6 foot 2 inch receiver from Buchholz High School in Gainesville, Florida. Whittemore finished his career with 24 touchdowns and he earned all-state second team honors following his senior season. Whittemore believes being able to catch the football is his greatest asset.

Whittemore didn’t immediately like the idea of sitting out last fall, but felt that time give him an opportunity to sit back and learn.

“It helped me tremendously,” Whittemore said. “If you would have asked me if I wanted to get redshirted I would have said no. Looking back, it kind of gave me an opportunity to get bigger and get faster. I can see it paying dividends now for sure.”

One player that has taken notice has been quarterback Kaleb Barker.

“I think he has come a long way,” Barker said. “I think the sky is the limit. He is a playmaker and he is a go-getter. He has really good ball skills, he is a fun guy to throw to and he is going to put it all on the line for you. That is what you want with a receiver.”