Moving on: Patriots sweep Lee-Scott in round 2 double-header 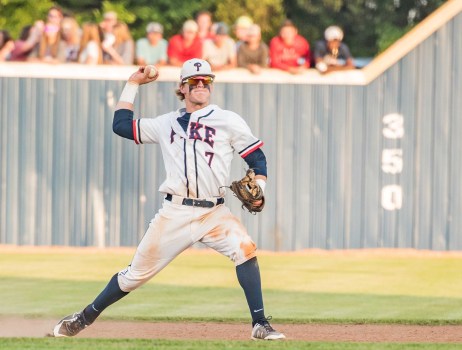 Photo/Jonah Enfinger Nathan Renfroe attempts to throw a runner out at first base. 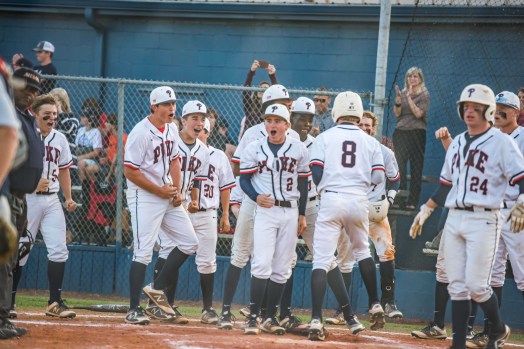 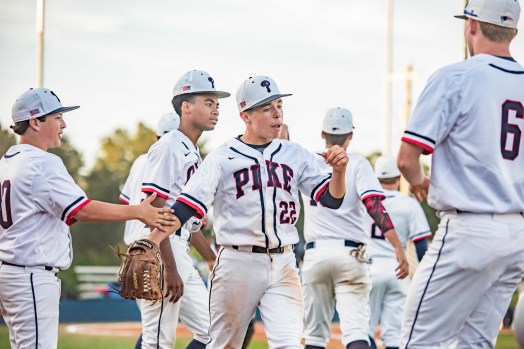 Photo/Jonah Enfinger Pitcher Drew Nelson (22) and the Patriots celebrate during their series against Lee-Scott on Wednesday night. 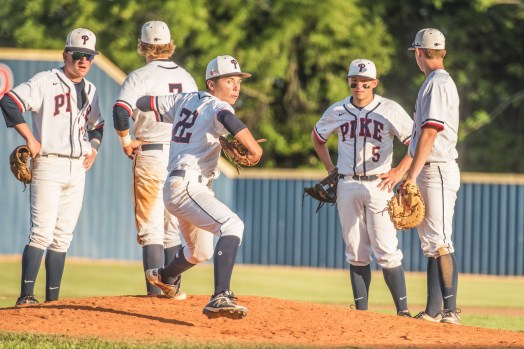 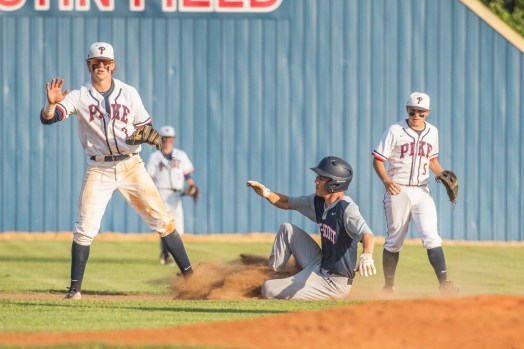 Photo/Jonah Enfinger The Patriots took on Lee-Scott in the second round of the playoffs on Wednesday. 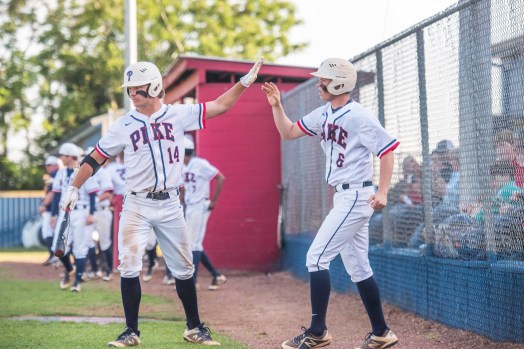 The Pike Liberal Arts Patriots advanced to the Class 3A semifinals after they swept a double-header against Lee-Scott on Wednesday evening in Troy.

It was a tale of two games on Wednesday. The Patriots squeaked out a close 6-3 win in game one before winning comfortably 15-2 in game two.

“We knew they were a real scrappy group and fundamental,” said head coach Allen Ponder. “We knew it wasn’t going to be easy. We punched across some runs first and they came right back. In the first game I thought our guys did a great job of preserving and overcoming adversity. In game two I thought we were more ourselves again. The last few games I thought we have been swinging the bats really well. We got back to that in game two.”

The series win will match the Patriots up against Tuscaloosa.

Reed Jinright got the start for the Patriots. The senior left-hander pitched 4.2 innings and allowed just three runs on one hit.

“Drew is only an eighth grader, but he is a kid that is going to come in there and throw strikes,” Ponder said. “The kid has nerves of steel. No situation is too big for him. He came in and did a tremendous job.”

The two teams played to a scoreless tie until the fourth inning. The Patriots got their first two batters on with back-to-back singles by Cole McWhorter and Trevor Barron. After a sacrifice bunt by Jade Sikes moved both runners into scoring position, Max Copeland singled to center field to drive in both runs of the game, giving the Patriots a 2-0 lead. Davis Allen closed out the scoring in the inning with a squeeze bunt to score Copeland from third to give the Patriots a 3-0 lead heading into the fifth.

The Warriors entered the inning in search of their first hit. Reed Jinright struggled to find the zone and walked three straight batters. John Lyle made the senior pay for it with a bases-clearing triple to even the game at 3.

After a scoreless fifth inning, the stage was set for Reed Jinright to play the hero. After Cody Hollis and Allen both reached base to begin the inning, Jinright launched the ball over the fence in right to give the Patriots their second three-run lead of the game at 6-3.

The Warriors got one guy in the seventh but Nelson slammed the door, giving the Patriots the game one win.

Game two was a little less stressful for the hometown Patriots. Playing as the visitor in game two, the Patriots jumped on the Warriors in the top of the first and scored two runs on a pair of RBI singles by Wood Jinright and McWhorter.

The Patriots tallied 12 hits over the first two innings of play. In the second, the Patriots scored five more runs to go up 7-0.

The Patriots posted their second consecutive five-run inning in the third to go up 12-0. Reed Jinright hit an RBI double to score Hollis and Allen came around to score on an error off the bat of Wood Jinright. For the second consecutive inning, it was Renfroe who had the biggest hit of the inning when he once again cleared the wall in left for his second homerun of the game.

“Those were really big for him,” Ponder said. “Nate is a guy that we have to get going.  This is the right time for him. He has been swinging the bat really well the last few games. For him to come out and have a great game two is very encouraging this time of year.”

The Warriors got on the board in the third inning before the Patriots scored their final three runs in the fourth on five more hits.

Sikes got the win for the Patriots he went the distance only giving up the two runs.

The Patriots will begin their series in Tuscaloosa next Wednesday.