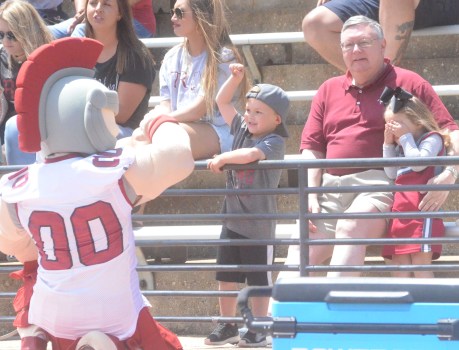 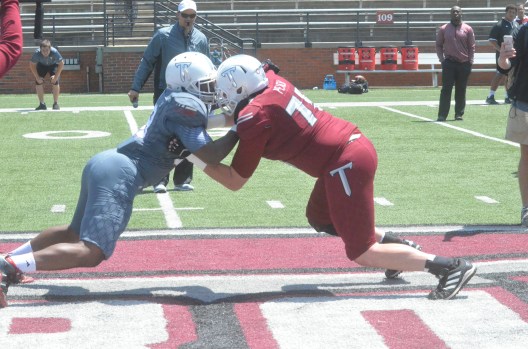 Fans were able to watch the Trojans partake in drills.

The Trojans held their annual T-Day game in front of a record setting crowd at Veterans Memorial Stadium on Saturday afternoon.

There is a lot of excitement swirling around the football program after they posted their first 11-win season in the program’s Division-I history. On Saturday the fans were able to watch their favorite team in action. they were also given the opportunity to watch the Trojans run different drills and partake in contests of their own.

“Fun day here in Veterans Memorial Stadium and I really enjoyed getting our guys back in here, said head coach Neal Brown. “Really the first time for our fans to really get a picture of what the new Vet is going to look like when we welcome Boise in here.”

During the live action portion of the scrimmage, Trojan newcomer Traveon Samuel had the biggest play of the game when he hauled in a 65-yard touchdown pass by quarterback Kaleb Barker in the third quarter.

“He has been our most consistent (player),” Brown said. “He has been out here everyday. He is a guy that’s steady and he is really consistent catching the ball. He is a good route runner, a coach’s son and he understands how to play the game. I am excited for the role that he is going to take for us.”

The spring’s major story line was going to be who is going to replace Brandon Silvers at quarterback. Spring started with a competition at quarterback between Barker and Smith. Both quarterbacks, in Brown’s opinion, did enough on Saturday.

“I thought there was some really good things today. I thought both quarterbacks had some high points and some low points, it’s really evident that we have a lot of work to do between now and when Boise comes here,” Brown said. “I feel confident that either Kaleb Barker or Sawyer Smith is capable to lead us and put us in a position to win a conference championship.”

As for the decision on who will be the starter against the Broncos, Brown is not ready to announce his decision.

The Trojans will host the Broncos in the season opener on September 1.