Overmatched: Trojans have season come to a close after opening round sweep at the hands of St. Paul’s 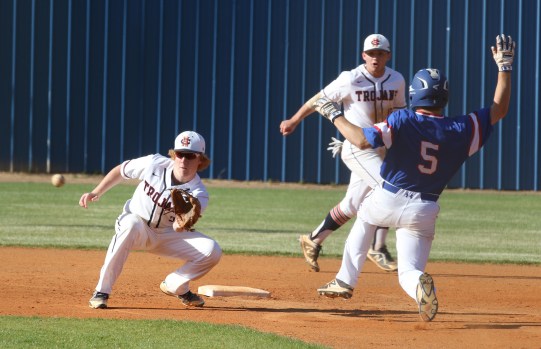 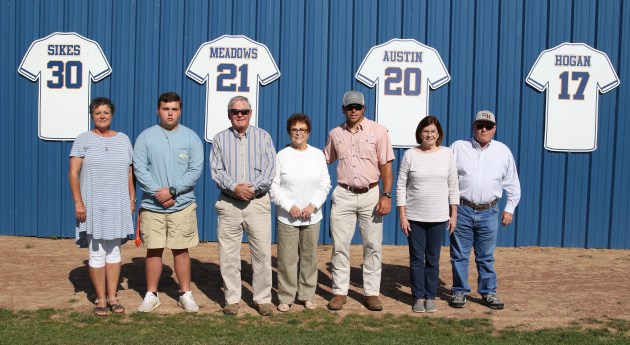 Before Friday’s double-header with St. Paul and Charles Henderson, four new signs were hung in the right field corner at Hogan’s Hole in honor of the four jerseys that have been retired in the history of CHHS baseball. On hand for the ceremony were Jennifer and Trott Sikes, in memory of Terry Sikes; Butch, Joyce and grandson Will Auston, honoring the retired jersey of Coach Austin, and Debbie and Mike Hogan, in honor of the retired jersey of Coach Hogan. The family of Brian Meadows had a prior commitment out of state and were unable to attend the ceremony, but #21 hangs on the Blue Wall in honor of Brian Meadows.

St. Paul’s Episcopal of Mobile took a 14-7 win over Charles Henderson High in the first game and a 12-0 decision in the second in the first round of the Class 5A state playoffs in Troy Friday at Hogan’s Hole.

Once the first game began, St. Paul’s took a 4-0 lead in the top of the first inning, but the Trojans tacked on a run in their first at bat when Chance Pollard singled and later scored on a sacrifice fly by Lawson Scarbrough to make the score 4-1.

The Saints led 12-1 after the top of the fifth, but the Trojans added four in the bottom half when Will Reeves was hit by a pitch, Walker Stallworth singled, Pollard reached on an error, Chris Maxwell was hit by a pitch, and Lowery hit a double to drive in three runs, cutting the lead to 12-5.

St. Paul, improving to 24-7 and ranked third in the state in the final AHSAA 5A rankings, went up 14-5 in the sixth, and CHHS added two more to make it 14-7 when Jaylen Deveridge walked, Reeves was hit by a pitch, Stallworth reached on an infield error, with Deveridge and Reeves scoring that inning to make it 14-7, which held up to be the final.

CHHS managed four hits in the first game as Pollard and Stallworth had one each, while Lowery had two.

Lowery and Caden Bryan worked on the mound in the first game, while Herndon Akridge went the distance for St. Paul’s, allowing four hits and striking out 13.

In the second game St. Paul’s took advantage of seven CHHS errors and collected six hits to score two in the first, two in the second, six in the third and two in the fourth for the 12-0 win.

CHHS managed only two hits off Saints’ righty John Snyder, who struck out eight. Pollard and Scarbrough each had one hit for the Trojans.

“We did not play the best we’ve played all year,” said CHHS head coach Matt Whitton, “I thought we did a really good job of competing in the first game against a really quality pitcher, and gave ourselves a chance to stay in the ballgame and get a win.”

The Trojans, ending the year at 11-22, only lose one senior, Noah Lowery, and return many young quality players for next season.