Walking off: Sikes finishes off Patriots’ comeback win over No. 2 Macon East 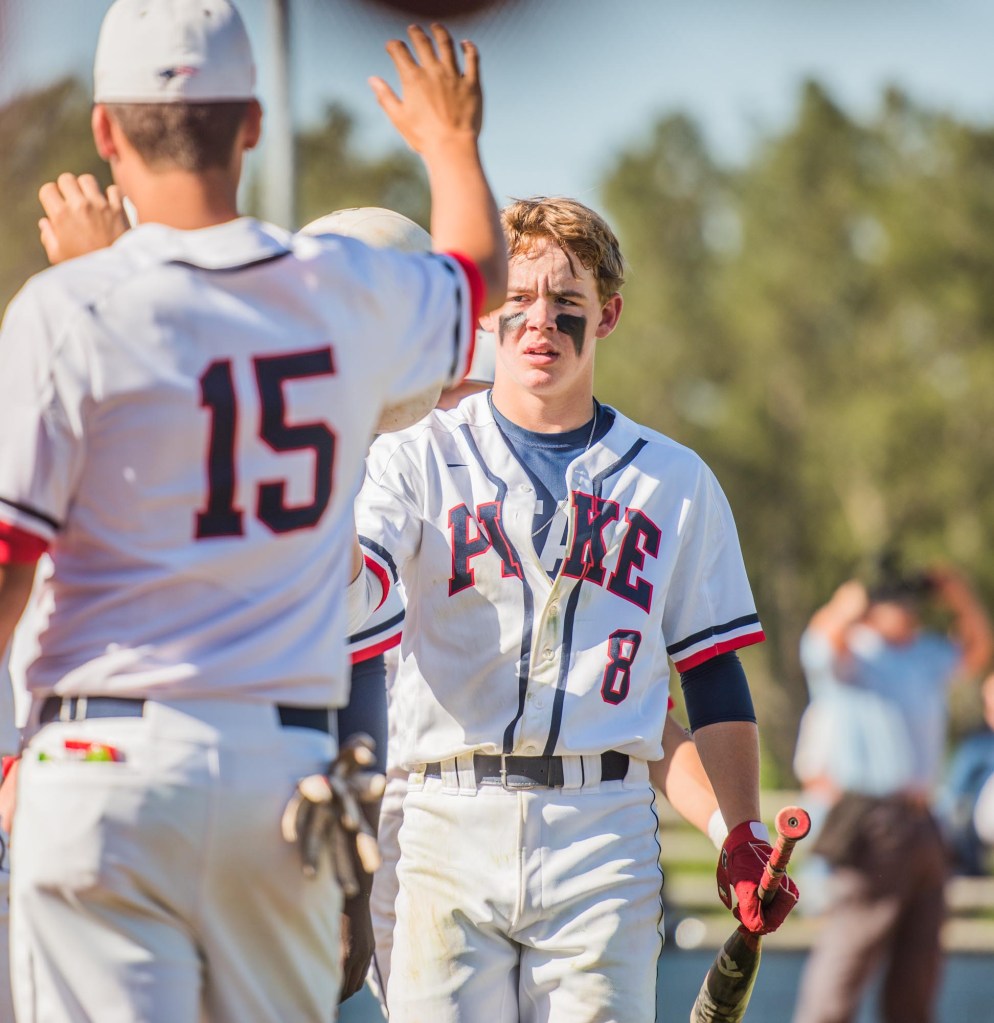 Cody Hollis celebrates with teammates after scoring against Macon East on Thursday afternoon.

Jade Sikes ripped a two-run double to right center to cap off a comeback win for the Patriots over the No. 2 Macon East Nights on Thursday afternoon.

The game didn’t mean a whole lot in the standings; in fact, the two teams, along with Eastwood, came up with this round-robin style tournament to give the three teams work before the start of the playoffs.

It was a battle between the top two teams in the state and, in the end, the Patriots stole the show after trailing by three runs in the fifth.

The Patriots committed four errors in the game, many of which occurred in the first few innings of the contest.

Reed Jinright got the start for the Patriots. The senior pitched the first three innings before giving way to Nate Renfroe.

Renfroe pitched the final four innings for the Patriots.

“Nate finished really well, but he didn’t start very well,” Ponder said. “Reed struggled a little bit today. We have to get him back in the zone. Nate did a great job late of keeping us in the game.”

After falling behind quickly in the first inning 2-0, the Patriots jumped on the scoreboard in the bottom of the inning when Reed Jinright grounded out to second to score Cody Hollis from third bringing to score to 2-1.

After the Knights got the run back in the second, the Patriots scored on a Cole McWhorter single to once again bring the Patriots to within a run at 3-2.

After the first scoreless half inning of the game, the Patriots grabbed their first lead in the bottom of the third inning when McWhorter doubled to left center to put the Patriots up 4-3.

There were a total of three home runs hit in the game by the two teams. The first one came off the bat of Kellen Ward, who hit a grand slam off Renfroe to give the Knights the lead back at 7-4.

Just like they did every other inning of the game, the Patriots stormed back in the fourth with a two-run double by Reed Jinright to bring the Patriots back to within one at 7-6.

The second home run of the game also came off the bat of a Knight’s player, this time in the fifth inning to give them their second three-run lead of the game.

The final homerun came off the bat of Patriot catcher McWhorter, who cleared the wall in left, making the score 9-7 in favor of the Knights.

The score held steady until the bottom of the seventh inning. After a quick out, the Patriots had three straight singles. Trevor Barron reached on an error to bring home Wood Jinright. Down by one, Sikes sent the Patriot fans into a frenzy with a walk-off two-run double.