Back on track: Trojans gearing up for St. Pauls in opening round of Class 5A State Playoffs 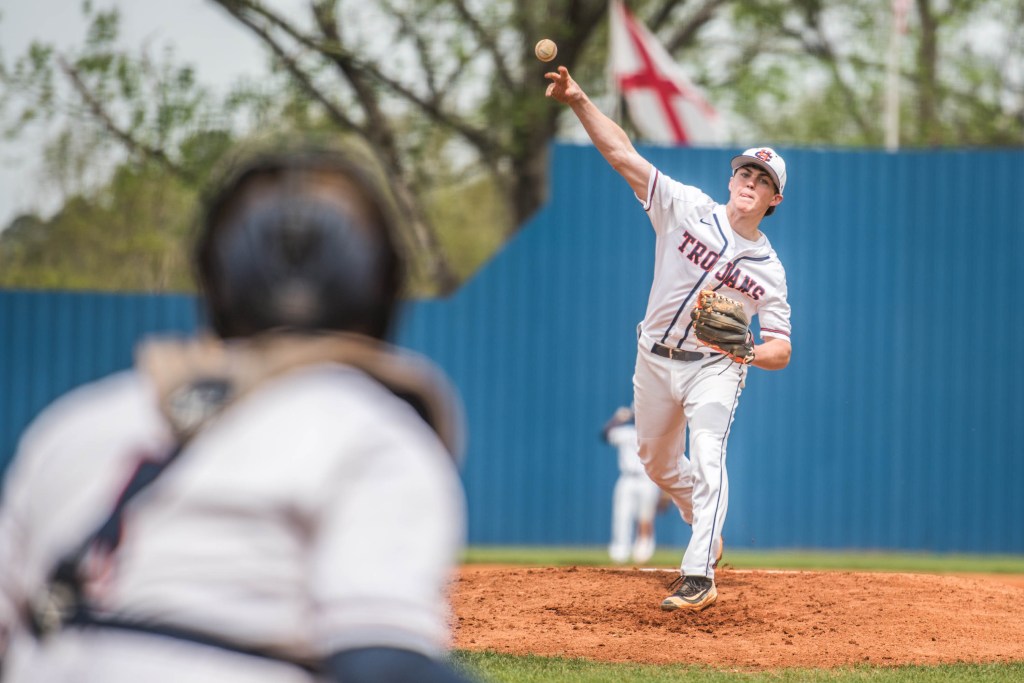 JB Sanders delivers a pitch for Charles Henderson in a game against Wicksburg earlier this season.

It has been a whirlwind of a season for the Charles Henderson baseball team. After a slow start and a change at head coach, the Trojans find themselves hosting highly ranked St. Paul’s in the opening round of the Class 5A State Playoffs.

The Trojans fell to Providence in their season finale on Tuesday evening when they surrendered an eighth inning walk-off homerun.

With Whitton at the helm, the Trojans have gone 11-11 to close out the season.

“We are getting to where we need to be,” Whitton said. “We have played real quality baseball over the last few weeks. We have improved a lot in things that were causing us trouble early in the year.”

Whitton believes the players have bought into his system, one that he carried over from his time at Enterprise High School.

“Even in the games that we have lost over the last couple of weeks we have played really good baseball. We just came up on the wrong side of it,” Whitton said. “That’s gong to happen. Overall I have been pleased with how we have played the last two weeks.”

Whitton was named head coach on March 6. The biggest change that he has witnessed in the last month and half has been the play of his team’s defense. In the first 10 games of the season, the Trojans regularly committed more than five errors a game.

“The kids are playing hard,” Whitton said. “We have improved defensively. Pitching has been good for us. Even in the games we have lost, they have been very clean games and fun to be a part of.”

The Trojans have had Noah Lowery, Anthony Gurba, Walker Stallworth and Jackson Giles all log important innings this season.

“Those four guys have kind of been our workhorses the last few weeks,” Whitton said. “Every time they have gone out there they have competed and thrown strikes, giving us a chance to win ball games.”

The Trojans have been getting production by different guys up and down the lineup according to their head coach.

“In the first week or so that I was here, it was kind of sporadic,” Whitton said. “Everybody was banging around and then we would have a game where one or two guys would get a hit. Lawson Scarbrough has been the catalyst in our lineup right now. He is swinging it well right now. Everybody in our lineup has done their part. That may not show in the batting averages, but we are having a lot of quality at-bats. We are finding ways to get on base and we have guys that can run.

“If we can find a way to get guys on, we are going to give ourselves a chance to score.”

The Saints come into the opening round of the playoffs as the Area 5 runner up. They finished the 2018 campaign with a 20-7 overall record and a 5-2-area record, finishing just one game behind Faith Academy.

The Trojans and Saints have a long history of meeting in the playoffs. The Saints knocked the Trojans out of the playoffs in both 2009 and 2015.

The Trojans will have to contend with starting pitcher Robert Akridge who has already committed to South Alabama.

“He is their number one guy and he is very good,” Whitton said. “They have two guys behind him that can pitch just as good as anybody else they got.”

The Trojans have spent the week game-planning for the series.

“We want to get ahead in the count and not pitch in 2-1, 3-1 counts,” Whitton said. “I think if we do that and make routine plays, we can give ourselves a chance to win.”

The first pitch of game one is scheduled for 4:30 p.m on Friday.

“I am eager for the challenge,” Whitton said. “I think the kids are too. I think they truly believe they can win the series.”