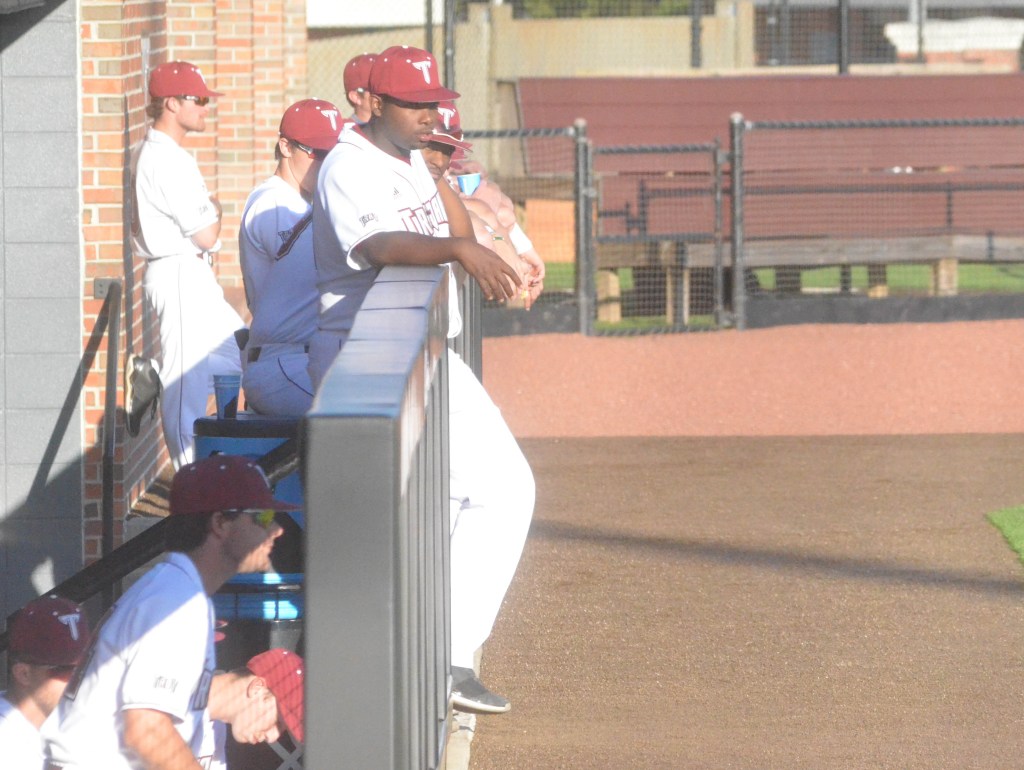 Messenger Photo/Mike hensley Darren Osby and his teammates watch the action during Troy’s game against Alabama A&M on Tuesday night. The Trojans defeated the Bulldogs 10-2.

The win for the Trojans improves their record on the season to 24-12.

Max Newton got the start for the Trojans. The lefty pitched five innings and allowed two runs on five hits.

After Newton wriggled off the hook in the first inning following a lead off double, the Trojans sent eight batters to the plate in the bottom half of the first and scored the game’s first three runs. Brandon Lockridge singled to left to drive in Drew Frederic for Troy’s first run. One batter later, Cole Prestegard singled to center to score Joey Denison. Chase Smartt drove in the final run of the inning with a sacrifice fly to right.

The Bulldogs cut into the Trojans’ lead in the fourth. They tallied two runs on two singles and went into the bottom of the fourth trailing 3-2.

Walks plagued the Bulldogs in the bottom of the fourth. The Trojans walked twice and they also reached base via a hit batter. With the bases loaded, Frederic reached on a throwing error by the Bulldog third baseman, allowing Sadler Goodwin and John Tatum to score and increasing the Trojans lead back to three at 5-2.

The Trojans blew it open in the seventh when they scored three runs on three hits. The Trojans got RBI singles by Denison and Goodwin and an RBI double by Chase Smartt.

The Trojans built up a little more of a cushion in the bottom of the eighth. Tyler head singled to right center to drive in Frederic before Goodwin was hit by a pitch with the bases loaded to bring the score to 10-2.

The Trojans finished with 10 hits led by Frederic and Lockridge who both finished with two hits. Goodwin and Smartt each finished the game with two RBI. Head, Dylan Crutcher, Prestegard, Goodwin, Smartt and Tatum finished with one hit apiece.

The Trojans will be back in action this evening when they travel to Montgomery to take on Alabama State beginning at 6 p.m.