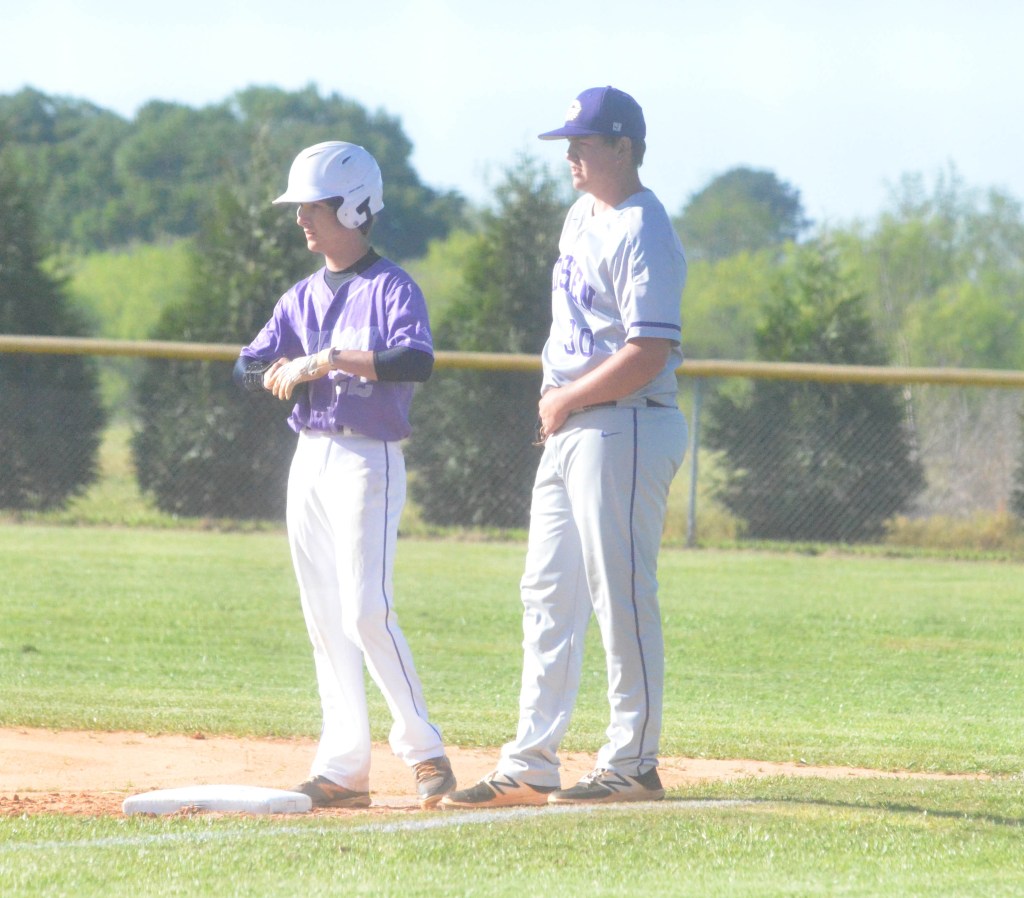 The Goshen Eagles and Pike County Bulldogs played for the third and final time on Monday afternoon. The Eagles took the series with a 10-0 win. Above: Alex Henderson (left) of Goshen and Blake Childs (right) of Goshen meet at first base.

The Goshen Eagles handled rival Pike County 10-0 in five innings on Monday afternoon on a day they honored their seniors.

The win for the Eagles closes out their regular season with a 6-15 record. Pike County dropped to 10-15.

“We got a walk-off win on senior day. You can’t ask for more than that,” said Goshen head coach Robby Kinsaul. “I’m proud of our guys. We pitched the ball well, we played defense when we needed to and we hit the ball, especially with two outs.”

Dalton Bunce got the start for the Eagles. He threw four innings of shut-out baseball.
Whit Mauldin started for the Bulldogs and threw 3.2 innings, earning himself the loss.

The Bulldogs finished with two hits by Julius Allen and Alex Henderson.

The Eagles scored their first four runs in the first inning when they sent eight batters to the plate. The Eagles got RBI hits by Bunce, Tate Phillips and Blake Childs. Galloway also came around to score on a sacrifice fly by Azavion Rogers.

The Eagles extended their lead to 5-0 in the second inning with a Rogers single.

Both teams held serve until the fourth inning. Goshen scored four runs on five hits. McGwire Stanley doubled in both Rushing and Galloway to bring the score to 7-0. Corey Peterson followed with an RBI single. Peterson came around to score on an RBI singly by Bunce.

In the bottom of the fifth, Galloway singled in Rushing to end the game, prompting the Eagles bench to storm out of the dugout.

The Bulldogs will close out the regular season on Thursday before taking on Keith on Friday to begin the postseason.

“I’m happy for our guys because we match up with someone that we feel like we have a chance to compete with,” Kinsaul said. “We always feel blessed to be in that situation because, after Thursday, there will be a lot of teams that will be putting baseballs up until next year.”