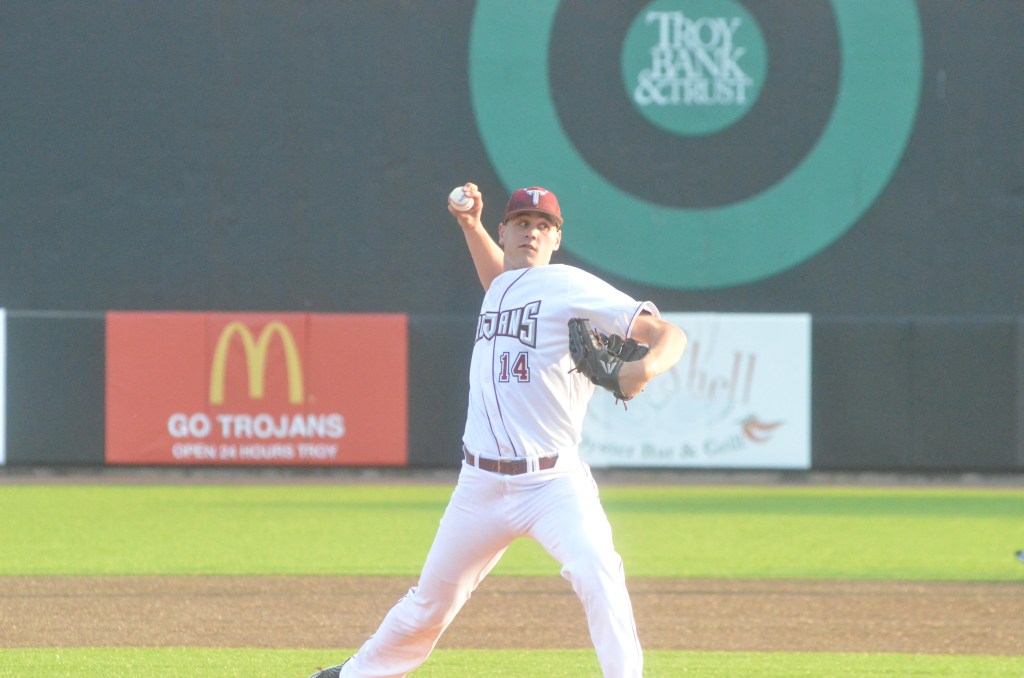 Joey Denison ripped a two-run single to left in the eighth to give Troy a 4-2 win over No. 17 Coastal Carolina on Friday night.

The win for the Trojans improves their record within the conference to 8-5 as well as their overall record at 23-10.

“It was a great game,” said head coach Mark Smartt. “Credit both teams. I thought the competition was really good. We played well. We didn’t get the big hit. We had plenty of chances. I am really proud of our team for scoring in the eighth.”

The win for the Trojans gives them an opportunity to win or even sweep the series over the ranked Chanticleers.

The Trojans got the home crowd on their feet when they jumped on the board first when Brandon Lockridge smacked a double down the left field line scoring Drew Frederick.

The Trojans caught a break in the second inning. With Chase Smartt at second and Manning Early at first, Matt Sanders hit a comebacker to the pitcher. Bilous’ throw sailed over second base allowing Smartt to score giving the Trojans a 2-0 lead.

Troy starting pitcher Andrew Crane wriggled off the hook a few times in the early innings. Crane allowed a base runner in all five innings that he was on the mound.

“I just wanted to come out and give our team a chance and throw up a zero,” Crane said.

Both teams squandered opportunities on Friday starting with the Trojan in the bottom of the fourth. Troy had the first two batters reach via the walk. Neither one came around to score. In the fifth, Coastal Carolina wasted a one-out double keeping the Trojans up 2-0 heading into the bottom of the fifth.

Crane allowed two runners to reach in the sixth. After picking up the second out, the Trojans brought in CJ Carter with two on. Coastal Carolina made a move of their own when they brought in pinch hitter Lee Sponseller. Carter won the battle and picked up a big strikeout to end the inning.

Coastal Carolina broke the five-inning scoreless streak in the eighth when they pushed across two runs on two hits including a two-run game tying double down the right field line off Carter.

The Trojans finally broke through and took advantage of runners in scoring position in the bottom of the eighth. With Jackson Cofer at third and Sanders at second, Joey Denison got hit by a pitch. The umpire deemed he didn’t make an effort to get out of the way keeping him at the plate. On the very next pitch Denison ripped single to left scoring both Cofer and Sanders giving the Trojans their second two-run lead of the game.

“I am glad they did let me stay in and hit, obviously because of the outcome,” Denison said. “Sometimes that happens. I fouled one off early in that at-bat and it barely got out so I caught two breaks during that at-bat and it ended up paying off for me.”

Denison finished with two of the Trojans six hits. Lockridge, Rigsby Mosley and Chase Smartt each had one.

The Trojans will be back in action Today when they host Coastal Carolina in a double-header beginning at 1 p.m.

“This is the kind of series we have to win if we want to win the conference,” Crane said. “We have to beat teams like this. They are a very good ball club. We have to keep it going and put it together.”