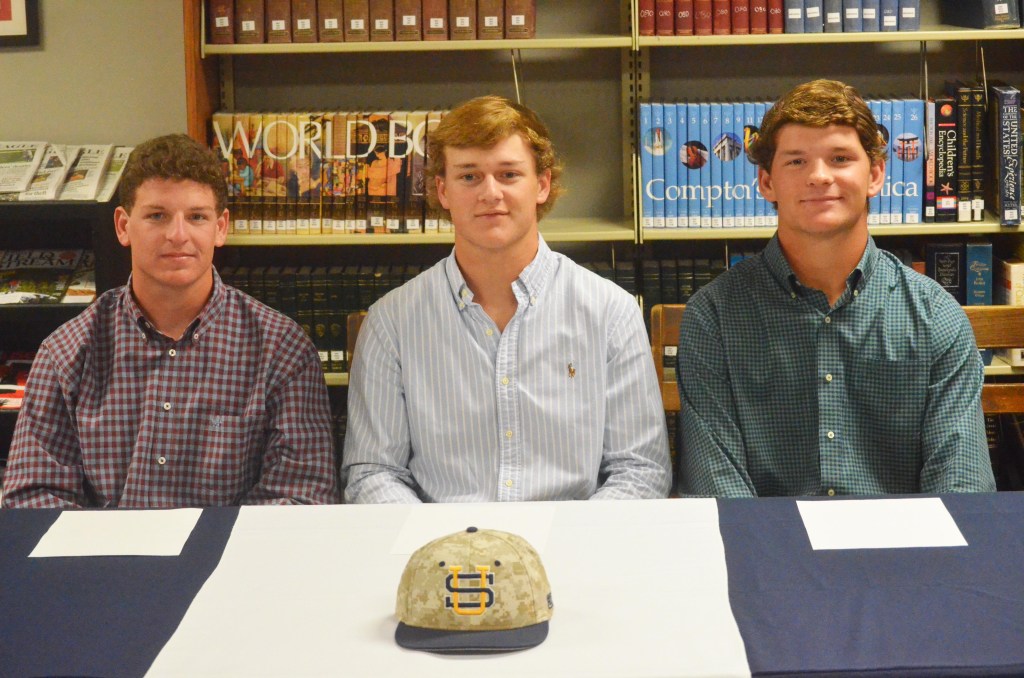 Both Jinright brothers and Renfroe have played a major role in the Patriots’ success and they had their dreams come true Thursday.

“It’s a big accomplishment,” Reed Jinright said. “All three of us have played baseball for as long as we could. It’s a great opportunity and I am very thankful for it. It’s very exciting to play at the next level. I am ready for it.”

“I am thankful for this school,” Wood Jinright said. “This is a big goal that we accomplished. We look forward to what next season brings for us, but we’ve got one more goal left and that is to win state.”

Both of the Jinright brothers have been playing for the Patriots since the seventh grade. Renfroe, however, is finishing up his one and only year at Pike. He became a Patriot after spending his first three years at Brantley High School.

Seeing all the people in the library on Thursday was a welcoming and humbling sight for the senior.

“It means a lot,” Renfroe said. “Some of these people haven’t known me for a whole year yet. To know they are all here to support me and doing everything can for me means a lot. I am very thankful for it.”

The three Patriots players have not only played together this season, but the three represented The American Legion Post 70 baseball team last summer. Reed Jinright relishes the opportunity to play together for the next couple of years.

“That will be a whole lot of fun to play together,” Reed Jinright said. “It will also help us a lot because we will be able to push each other more than other people will. We will get better together. We all have the same goals to go on and play Division I baseball.”

“We will hold each other accountable,” Renfroe said. “We are all pretty close. We aren’t going to let anybody slack off. It’s going to be fun having someone up there that you already know.”

The two Jinright brothers have never played on separate days going back to their days in rec. league.

“It’s same old, same old,” Wood Jinright said. “I have never been on a different baseball team. It will be fun.”

The three Patriots will be playing under Joe Jordan.

“I am very grateful that he gave us this opportunity,” Reed Jinright said. “He seems like a very good baseball coach. He has been with the program for 30-some years. He knows what he is dong and I am very excited to play for him.”

The playoffs begin in the final week of April. The three signees are focused on closing out their high school career on top.

“We are focusing on doing things the right way,” Renfroe said. “We can’t take any days off because it’s crunch time. Everybody is good at this time of the year.”

“We need to make sure everyone is on the same page,” Wood Jinright said. “Everybody is doing the little things.”