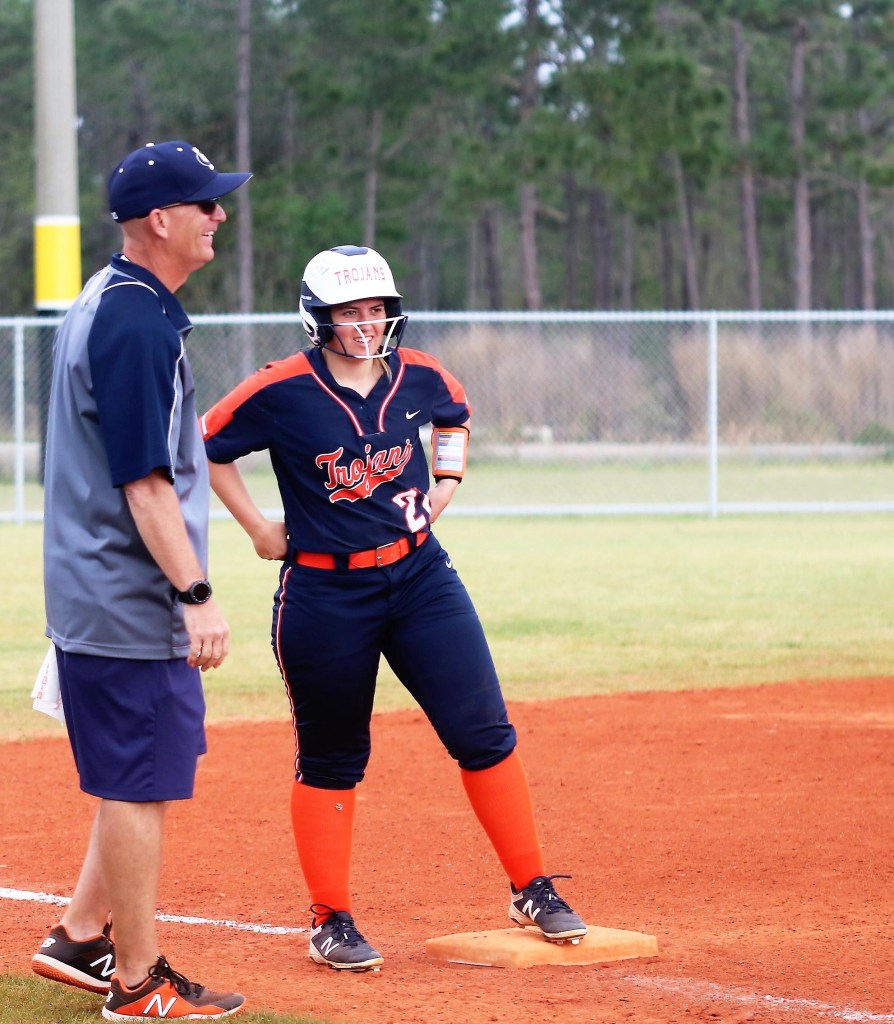 The Charles Henderson Lady Trojans defeated Brew Tech 16-6 on Monday night to claim the 2018 area championship. Above: Head Coach Robin Snyder talks with one of his players at third base.

The win gives the Trojans their second area championship in a row. They will host the area tournament starting on May 1.

“We wrapped it up last night,” said Trojans head coach Robin Snyder. “That was a big plus and an accomplishment on our part. That’s the second year in a row that we won the regular season area championship. The only thing that really means is that we can host the area tournament.”

The area tournament will determine who moves on to the Regional Tournament in mid may.

“The tournament determines which two teams get to represent out area,” Snyder said. “At least we will be at home to host the area tournament. Greenville and Brew Tech will be the (other) two teams to play in the tournament.”

Last year’s area championship meant the Trojans got to host the tournament for the first time in recent memory. Although it was goal number one this year, the Trojans hope its just the beginning.

“That was a big win,” Snyder said. “One of our team expectations was to win the area, so that was a big plus to get that accomplished last night.”

The Trojans believe they play with a confidence at home. Monday night’s win only increases that come tournament time.

“Any point you win at home it’s about confidence,” Snyder said. “Here lately we have lost a couple of games that we knew we could play better in. Any time you win a game, that gives you more confidence.”

The Trojans finished area play undefeated and they outscored both Greenville and Brew Tech 59-6 along the way.

On Monday night the Trojans stormed out to a 5-0 lead before allowing Brew Tech to score four runs in the next inning. With the score 8-5, the Trojans rattled off eight runs to secure the 10-run win.

“It was very good that we continued to hit the ball,” Snyder said. “I saw a lot of positive things. We stressed to the girls all year long that it’s not how you start, it’s how you finish – regardless if it’s an inning or a game.”

The season has not gone the way the Trojans had hoped despite winning the area tournament. They find themselves below the .500 mark, but Snyder believes there is time to change that.

“There is time to turn it around and make it a positive season,” Snyder said. “We are hoping this will catapult our season.”

Snyder hopes the confidence at the plate keeps growing after Monday night’s win.

“Last night (Monday) we were consistent and had just three strikeouts,” Snyder said. “We did hit the ball really well. We had some timely hits by certain batters.”

With a few weeks remaining in the regular season, the Trojans are looking for consistency.

“Consistency on the offensive and defensive side,” Snyder said. “We still need to cut down on our strikeouts from game to game. We have to be able to put the ball in play. We know we aren’t going to get everybody on all the time, but we need to ball the ball in play and minimize the number of strikeouts.”

The Trojans took a 7-1 lead into the bottom of the fifth inning before falling to Luverne 10-9 on Tuesday.