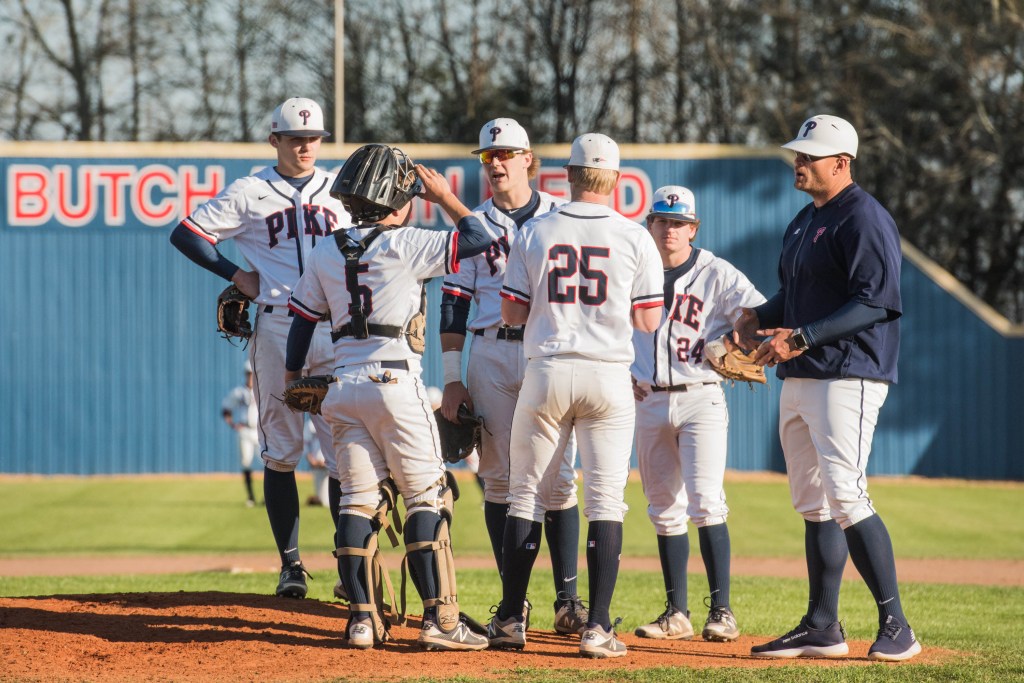 Messenger Photo/jonah Enfinger The Pike Patriots swept Lakeside on Saturday to claim the area championship. The Patriots will be back in action Thursday when they host Edgewood.

The Pike Liberal Arts Patriots claimed the 2018 area championship on Saturday evening when they swept Lakeside in a double-header by scores of 14-0 and 16-1.

The win for the Patriots improves their overall record to 25-4 and they conclude area play with a 5-1 record, good enough for the regular season area championship.

“That definitely was goal number one,” said head coach Allen Ponder. “That becomes so important when playoffs roll around because you want to play every series you can at home. That gave us that opportunity.”

Reed Jinright got the win on the mound for the Patriots in game one. He pitched all five innings of the shortened game. He allowed four hits, one walk and he struck out five batters.

Game two went just three innings between the Patriots and Lakeside with Jade Sikes pitching all three of them. Sikes allowed one unearned run on one hit and he struck out two batters.

Cole McWhorter stole the show in game two for the Patriots. McWhorter finished with seven RBI and three runs scored. Four of his RBI came by way of a grand slam.

“He swung it great,” Ponder said. “He is getting closer, swinging the bat, to the player that I always knew he could be. Cole takes unbelievable rounds on batting practice. We talk all the time about translating BP to the games and I think he finally did that on Saturday. For him personally, I think that will give him confidence moving forward.”

The goal regardless of wins and losses was to win the area this season. The Patriots had one area game this season where they failed to put together a complete game against Lakeside, but other than that, Ponder believes his team accomplished all he could ask for in area play.

“We had one game where we didn’t come out and play very well,” Ponder said. “Lakeside played very well and beat us in one of those games. When you get to the end of it, it really doesn’t matter what your record is as long as you win the area. We did what we had to do to win the area. I feel like that is really going to benefit us when the playoffs start.”

The Patriots have just one more regular season game remaining before they begin the playoffs. That game comes on Thursday when they host Edgewood beginning at 3:30 p.m.

“I want to see us continue the momentum,” Ponder said. “For the first time this year I feel like we finally put together a complete game on Saturday. For us doing that at the end of the season is huge. We want to continue the momentum, continue to get better and we want to peak at the right time and be playing our best in the playoffs.”