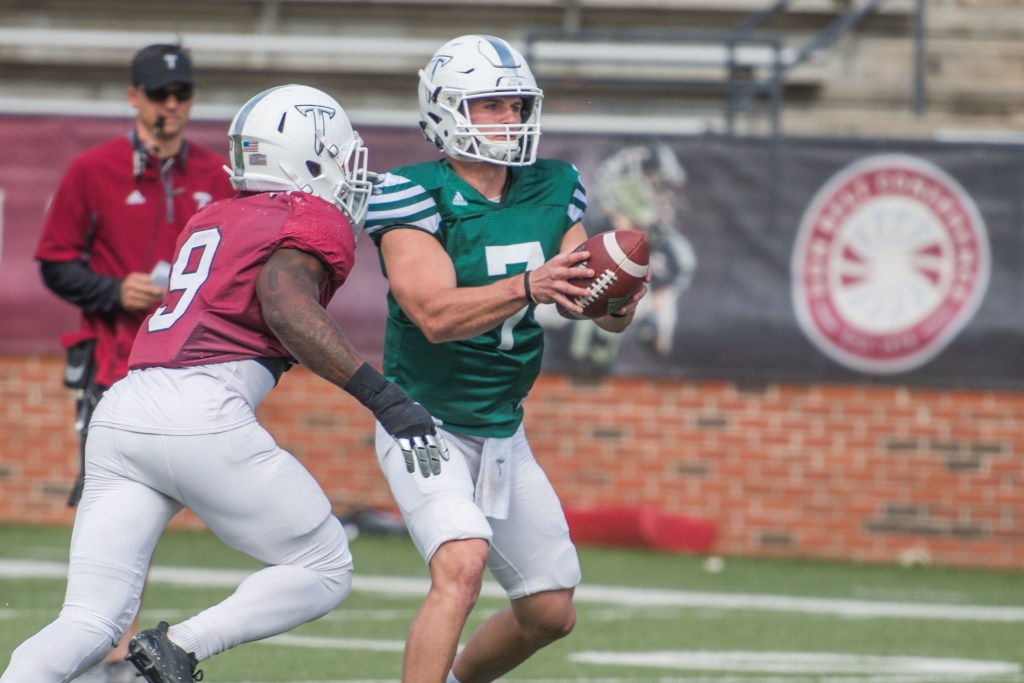 The Troy Trojans held a scrimmage at Veterans Memorial Stadium on Friday afternoon. It was Student Appreciation Day at the Vet as students were treated to games and free football. Above: Quarterback Kaleb Barker hands off to running back Jamarius Henderson on Friday. Henderson left Friday’s scrimmage with an apparent upper-body injury

With Troy now at the unofficial half way mark of spring practice, the Trojans held their annual Student Appreciation Scrimmage on Friday afternoon at Veterans Memorial Stadium.

Students were invited to watch the Trojans practice, while also participating in drawings and football contests including punting, passing and kicking. Two lucky students were also able to call a play during the scrimmage.

“It was a fun day,” said Troy head coach Neal Brown. “We had a really good turnout. I appreciate all the Greek life showing up before going down to the Greek Week Finals. I don’t know what the final count was, but we had a good number here.”

The Trojans spent much of the practice splitting reps between the first and second stringers either 11-on-11 of 7-on-7.

“It was kind of one of your normal spring practice days,” Brown said. “Both sides I think did some really good things.”

The Trojans have been battling the injury bug all offseason and on Friday it bit again when running back Jamarius Henderson went down with an apparent injury.

The Trojans began the spring without the likes of Blace Brown, Melvin Tyus and Hunter Reese. More recently, the Trojans have had players on the offensive side of the ball get banged up including Henderson and Kevin Perkins who was seen on crutches at Friday’s practice.

“We have a lot of guys out,” Brown said. “A lot of guys that are going to be on the field when we kick it off against Boise at the beginning of the year. They didn’t practice today. Hopefully it’s nothing really serious, but several guys are out.”

The Trojans entered the spring with an open competition at quarterback between Sawyer Smith and Kaleb Barker. Barker spent the day working with the first unit, but with so many people on the sideline injured, it was tough for Brown to gauge the two quarterbacks.

“It’s hard for the quarterbacks,” Brown said. “It’s a tough day to evaluate because we had so many different pieces. Everybody (wide receivers) with the exception of two of our wide-outs didn’t practice.”

Even with a lot of players sidelined, Baker believes the adjustments have been minimal.

“There isn’t much separation between the ones and the twos,” Barker said. “The guys step up. We still have the guys on the outside that make plays.”

As far as the offense’s performance in the spring goes, Barker was pleased with offense but admits there is still a long way to go.

“I think it was good,” Barker said. “We still have some things that we need to work on as far as protection up and front and assignment wise on the outside. I think we have made a lot of strides since the beginning of the spring.”

“We did a lot of good things,” Smith said. “A lot of individual guys stood out. Luke showed out today and made a lot of good plays and good catches.”

“He has toughness about him and he has been consistent,” Brown said. “We challenged him at the start of spring practice and Tuesday and Thursday were great days. I don’t think he was as productive today, but Tuesday and Thursday he made a bunch of really good plays in the redzone.”

For guys like Whittemore, the injuries give them time to show what they are made of.

The Trojans have five more practice days before the annual T-Day scrimmage on April 21 at Veterans Memorial Stadium.