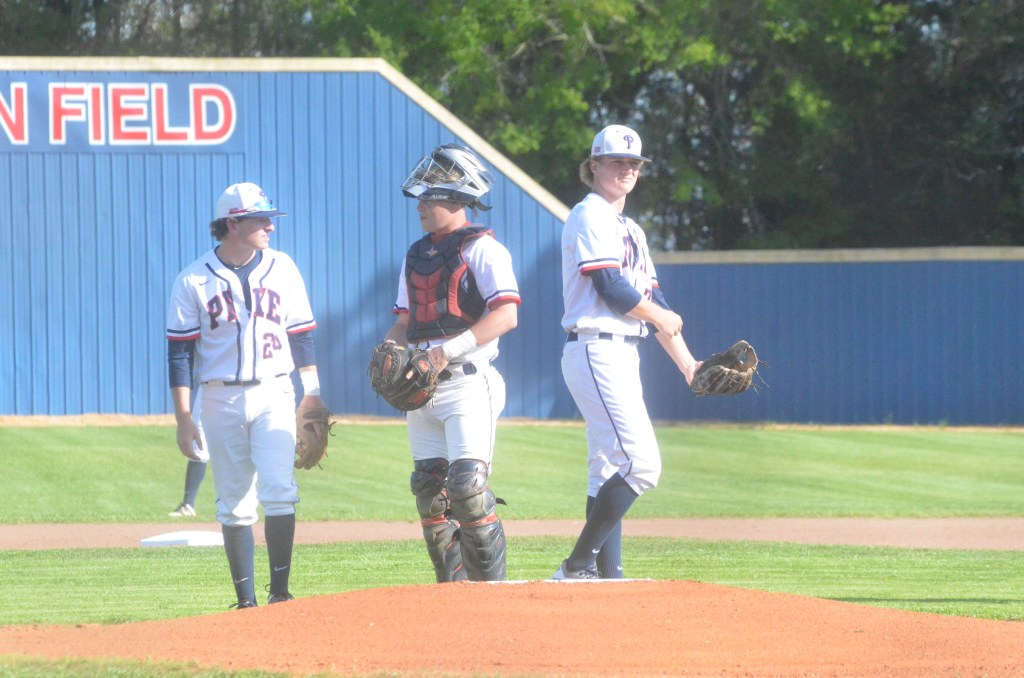 The Pike Patriots overcame an eight-run deficit in their 10-8 win over rival Fort Dale on Thursday evening in Troy.

The win for the Patriots improves their record on the season to 24-4.

Ponder sent five different pitchers to the mound by design on Thursday night. Nate Renfroe, Jade Sikes, Cole McWhorter, Holt Steed and Drew Nelson all toed the slab for the Patriots in the win.

“We have been so spread since the break and we wanted to get everybody some work,” Ponder said. “It’s one thing to have the guys in the bullpen, but it’s another thing to get them some live work. We wanted to do it against Emmanuel, but the plan carried over to Fort Dale.”

Seven of the Eagles runs came in the third inning with McWhorter on the mound. McWhorter surrendered just two hits, but he also walked four batters and hit another.

After McWhorter’s exit with one out in the inning, Steed came in to pitch the Patriots into the fourth inning. Steed allowed a double that drove in two runs, both runs were credited to McWhorter.

Nelson came in and pitched the final four innings and allowed just one run.

“Those guys (Steed and Nelson) just showed that if you just throw strikes, good things will happen,” Ponder said. “We pounded the zone and we didn’t walk guys when those guys came in and good things happened for us.”

With Pike down 8-0 in the fifth, the Patriots sent 12 batters to the plate. The Patriots tallied four hits in the inning, but they were also aided by four straight walks. The Eagles also hit a batter in the inning. Reed Jinright had a two-run triple scoring Cody Hollis and Davis Allen. Later in the inning, Hollis had a two-run extra base hit of his own when he doubled in both Trevor Barron and Jade Sikes. The game-tying run came on a sacrifice fly by Allen.

The Patriots went on top in the sixth inning on a pair of RBI singles by Wood Jinright and Barron.

The Patriots will be back in action on Saturday when they host Lakeside in a double-header.