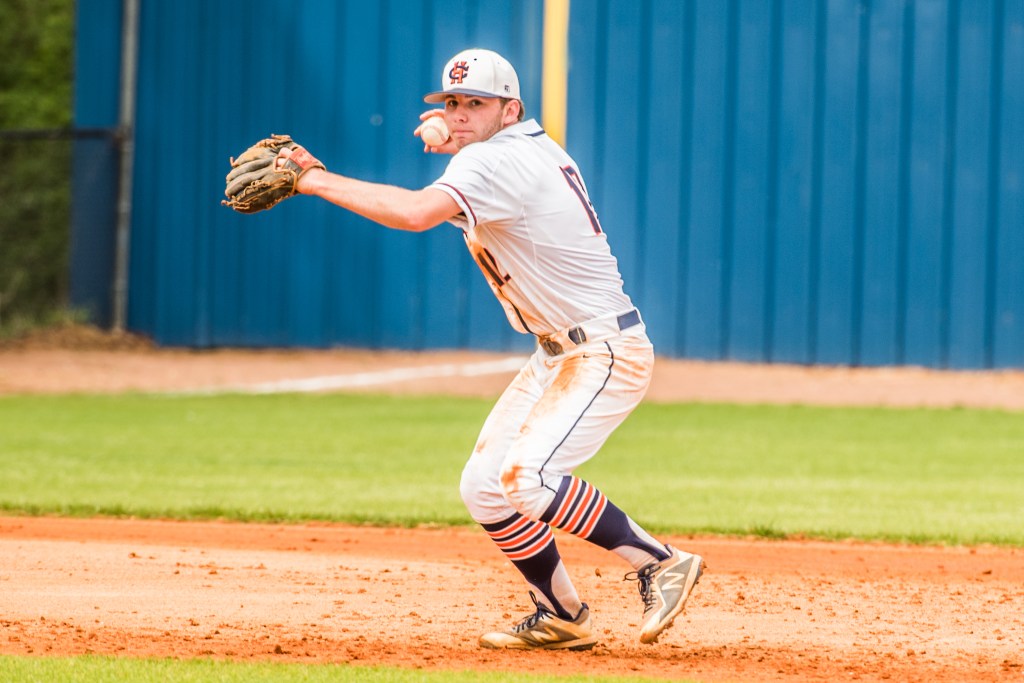 Messenger Photo/Jonah Enfinger Anthony Gurba looks to throw a runner out at first base during Charles Henderson’s game agaisnt Wicksburg on Friday afternoon.

The Charles Henderson Trojans squandered a 5-0 lead in their 14-5 loss to Wicksburg on Friday afternoon at Hogans Hole.

The Trojans brought their lead to 5-0 through four innings on Friday, but the Panthers scored 14 in the final three to earn the 9-run win.

Charles Henderson finished with 7 hits in the loss. Lawson Scarbrough and Chance Pollard led the way with two hits apiece, while Tyrell Jones, Walker Stallworth and Anthony Gurba each picked up one.

The Trojans scored two runs in the opening frame to take an early lead. Scarbrough reached on an error by the Panther second baseman to drive in Pollard and Noah Lowery scored on a Bryan sacrifice fly.

The Trojans pushed their lead to 3-0 with a bases-loaded walk by Jones in the second.

In the third, Stallworth singled in Jones to make it 4-0 in favor of the Trojans. Charles Henderson scored their final run in the bottom of the fourth when Lowery reached on Panther error that allowed Jackson Giles to score.

The Panthers sent 12 batters to the plate in the fifth inning. They scored seven runs on nine hits, including five straight singles to start the inning.

Up 7-5 entering the sixth inning, the Panthers tacked on six more runs to gain a comfortable eight-run lead at 13-5.

Wicksburg scored their final run in the top half of the sixth.

The Trojans allowed five runs in the second inning in their 6-0 loss to Elmore County.

Will Reeves got the start for the Trojans. Reeves pitched 2.1 innings and allowed five total runs, four of which were earned on four hits and four walks.

The Trojans finished with two hits by Lowery and Scarbrough.