Late Drama: Troy finishes off game one victory before falling in pitcher’s duel 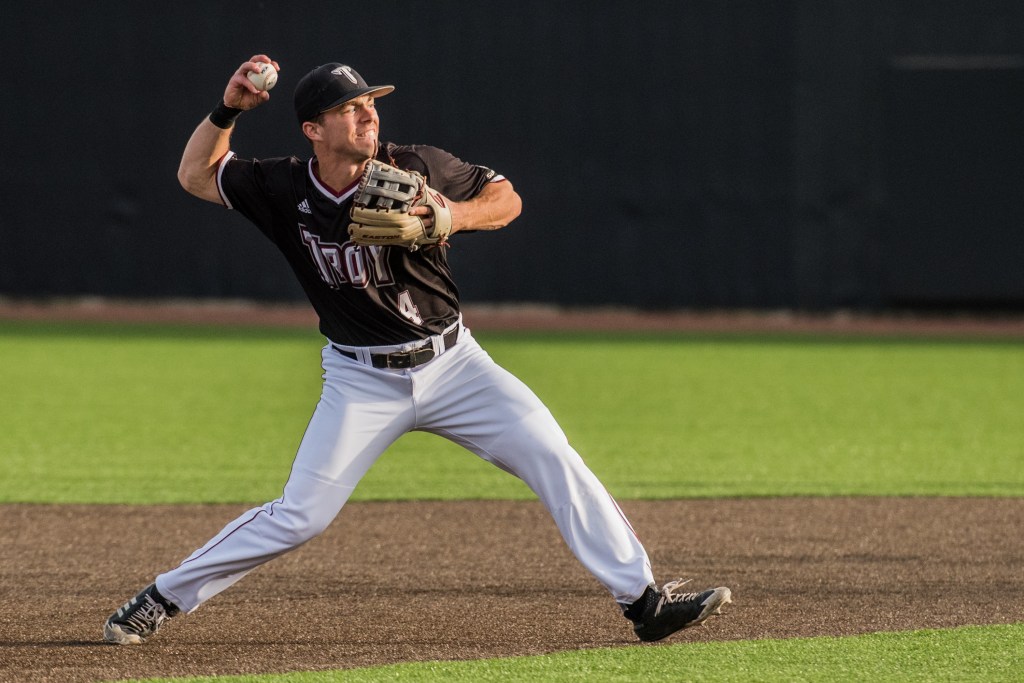 Photo/Jonah Enfinger Matt Sanders (Above) looks to throw out a runner at first on Friday night against Georgia State.

Friday night was a night of baseball at Troy’s Riddle-Pace Field as the Troy Trojans and Georgia State Panthers finished off the first two games of their conference series.

Troy and Georgia State started the night finishing Thursday night’s suspended game with the Trojans knocking off the Panthers 14-4. The Panthers got the best of Troy in game two by a score of 5-2.

Game 1 picked back up in the bottom of the third inning with the game tied at 3. Corey Childress pitched all six innings after play resumed. He allowed one run on three hits, while striking out five.

“Corey was great,” said head coach Mark Smartt. “I never anticipated him finishing that game. We scored, which made his job easier. He commanded the ball, threw strikes and we made plays behind them.”

The Trojans finished with 15 hits in game one led by Joey Denison who went 4-5 with 2 RBI. Matt Sanders, Drew Frederic, Chase Smartt, Brody Binder and Manning Early all had two hits.

In game two the Trojans fell behind 2-0 in the second when the Panthers had three hits including an RBI triple.

The Trojans immediately responded with a pair of runs in the bottom of the inning. Rigsby Mosley hit a one-out double and came around to score with Smartt on a double by Binder to straight away center.

Starting pitcher Rush Hixon pitched the first fix innings allowing two runs on eight hits. He struck 10 batters on the night, the most by a Troy pitcher this season.

“For him to give us six is a little above what I expected from him because he hasn’t started since the second week of the season,” Smartt said. “He was outstanding. He did great work and gave us a chance against the best pitcher in the league. We knew runs were going to be at a premium against him so he had to pitch well and he did.”

Lance Johnson came in in the seventh inning and stranded a base runner with the help of a 4-6-3 double header.

After Johnson pitched two innings, CJ Johnson came in to pitch the ninth inning with the game still deadlocked at 2. The right-hander struggled with his control in the inning. The Panthers had four straight batters reach on bookend singles and a pair of walks. The big blow came on a blooper that dropped behind a drawn in infield driving in two runs. The Panthers scored three runs in the inning to send the game to the bottom of the ninth with the Trojans trailing 5-2.

“It just got away from CJ,” Smartt said. “He hasn’t done that all year. It was uncharacteristic of him to walk guys and unfortunately the inning got away from us.”

The Trojans finished with eight hits led by Binder who went 3-4 with two RBIs. Denison also had a multi hit night by going 2-4.

The Trojans will conclude their series against Georgia State today at 1 p.m.

Darren Osby will get the start for the Trojans.

“He has thrown the ball well the last couple of times out,” Smartt said. “He threw a great game against this team last year. I expect him to be ready to go. It’s a game we have to win, bottom line. I expect our team to play well.”