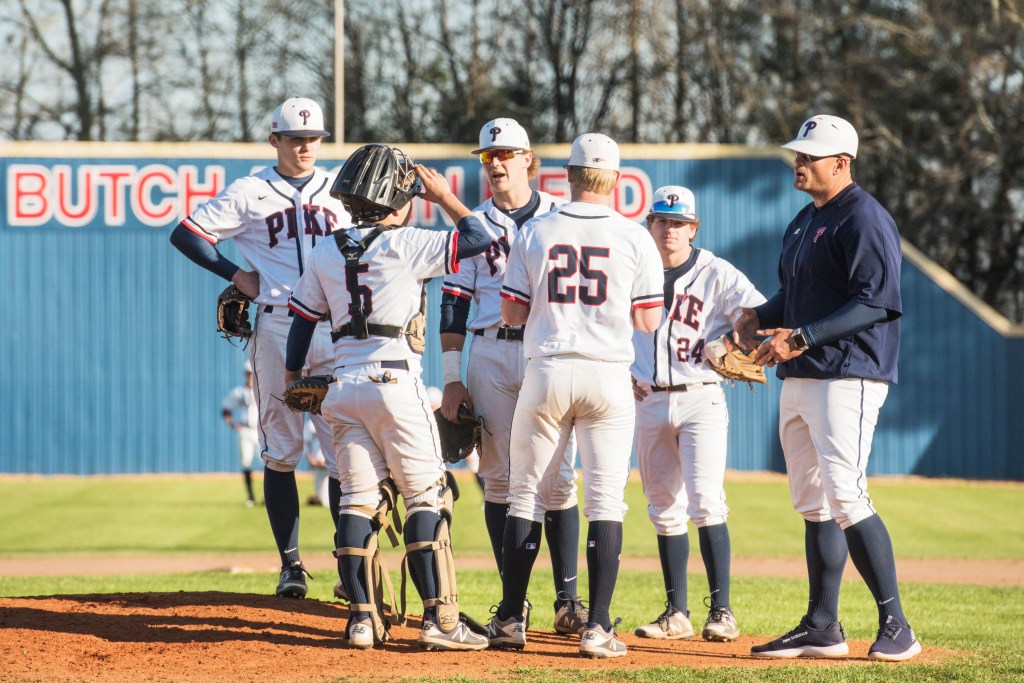 Messenger Photo/Jonah Enfinger Patriots’ head coach Allen Ponder talks with his players during a game against Northside on March 22. The Patriots were voted as the top team in the state on Thursday.

The Pike Patriots baseball team landed in the top spot of the latest Alabama Sports Writers Association Poll on Wednesday.

It’s the first time in eight years that the Patriots have been ranked number one.

The Patriots are currently 21-4 on the season and even though they are number one there is no the time to be complacent according to head coach Allen Ponder.

“Obviously it’s nice to be there, but we don’t think much of it,” Ponder said. “We are try to get our kids all year long to not worry about the rankings and just go out there and play consistent baseball every day. We are still working on that.”

What the rankings show, according to Ponder, is how much work the players have put in so far this season.

“It’s testament to the hard work the kids have put in,” Ponder said. “We understand there is a lot of room to get better. That is what we are looking towards.”

One area the Trojans have excelled at is on the mound. The Patriots have a team ERA of 2.04 on the season. Clay Barron leads the way in the low ERA battle with a minuscule 1.96 ERA over the course of 21.1 innings. Javon Christian and Jade Sikes also have an ERA under 3 through 10.1 and 22.1 innings respectively.

“We have had quite a few arms step up for us,” Ponder said. “We are doing a much better job of throwing strikes early in the count. We struggled early in the season with way too many walks. They would have runners on base and someone would have a timely hit. It was tough for us.

“Our pitchers have done a really good job working hard in bullpen sessions and putting emphasis on pounding the zone.”

Ponder credits the pitching success to the strong play by his defense.

“We feel like we have one of the best defense’s behind our pitchers,” Ponder said. “Our pitchers have thrown consistent strikes and allowing other teams to hit the ball early in the count and it has really paid off.”

At the plate, Ponder would like to see his players become more consistent with their approach.

The Patriots have a team batting average of .317. They have scored a total of 214 runs over the first 25 games of the season. Cody Hollis is leading the team by far in hitting. He is sporting a .424 average in his 66 at-bats.

Despite the high batting average, there have been games when the Patriots offense hasn’t had its usual thump.

“It’s been very inconsistent,” Ponder said. “We are getting better but still feel like we haven’t reached our potential yet. We preach a lot about peaking at the right time and we continue to work hard everyday during batting practice. We know we have the players and the athletes to get over the hump.”

The Patriots have a little under a month until the start of the postseason. They are going to take things one day at a time.

“We want to get better in every single game in some way,” Ponder said. “I think the last few games we have done that. I think we had some mental letdowns against Lakeside, but I think we worked a lot of those kinks out. We are excited to get back to playing games again to see where we are at.”

The Patriots will return to action this afternoon when they travel to play Bessemer in a double-header scheduled for 4 p.m.