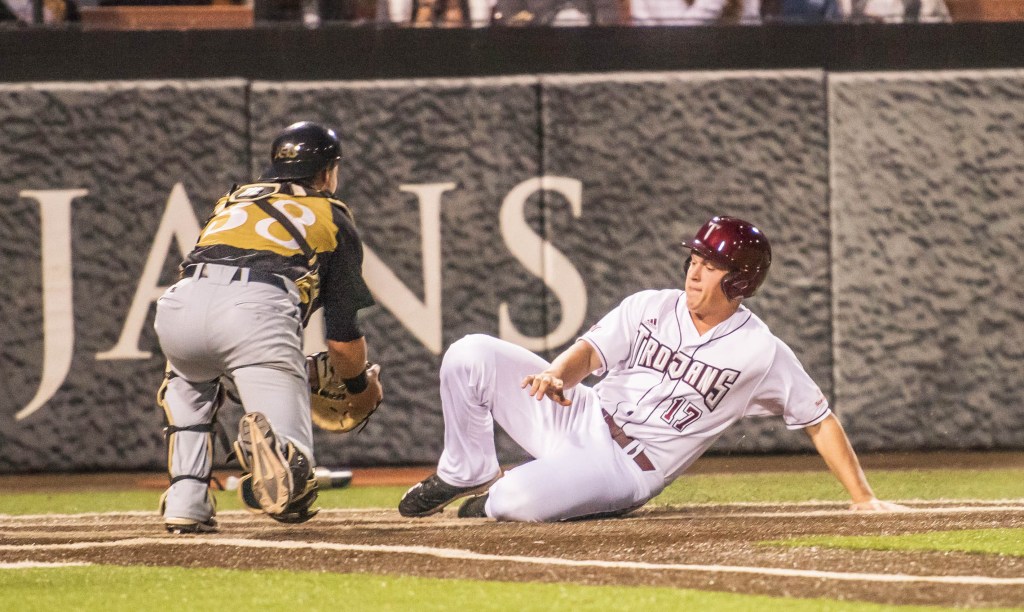 The Troy Trojans scored five runs in the first two innings of play on Tuesday en route to a 14-1 win over in-state rival Alabama State.

The win for the Trojans improves their record on the season to 17-8.

Drew Frederic singled through the right side to drive in Matt Sanders for the game’s first run. Rigsby Mosley singled to right on a hit-and-run attempt to score Frederic, putting the Trojans up 2-0.

The Trojans had five hits over the first two innings. After scoring three more runs in the second, they stretched their run total to five as well. Joey Denison smacked a two-run single to drive in both Manning Early and Matt Sanders. Brandon Lockridge reached on a fielder’s choice to drive in Troy’s fifth run.

Troy starter Sadler Goodwin ran into a bit of trouble in the third. He allowed the first two batters to get into scoring position without anybody out. But by inning’s end, Alabama State had scored just one run.

Goodwin lasted four innings on Tuesday. He allowed just the one run on three hits.

The Trojans got the run back plus one more in the bottom of the fourth inning when Cole Prestegard singled through the right side scoring both Denison and Frederic.

Chase Smartt led off the fifth with a double, his second hit of the contest, and came around to score on a single to right field by Manning Early.

The Trojans scored in five of the first six innings. In the sixth, Lockridge led off the inning with a triple to left center. He came around to score on a sacrifice fly by Prestegard to stretch the Trojans lead to eight at 9-1.

The Trojans picked up an RBI groundout by Frederic, an RBI single by Jackson Cofer, an RBI single by Brody Binder and a bases-loaded walk by Early to extend their lead out to 13 at 14-1 heading into the eighth inning.

Along with Goodwin, the Trojans sent Zack Lightsey to the mound. Lightsey pitched two scoreless and hitless innings for the Trojans. He didn’t allow a walk and he struck out one. Levi Thomas and Lance Johnson also pitched for the Trojans.

The Trojans will be back in action on Thursday at home against Georgia State.