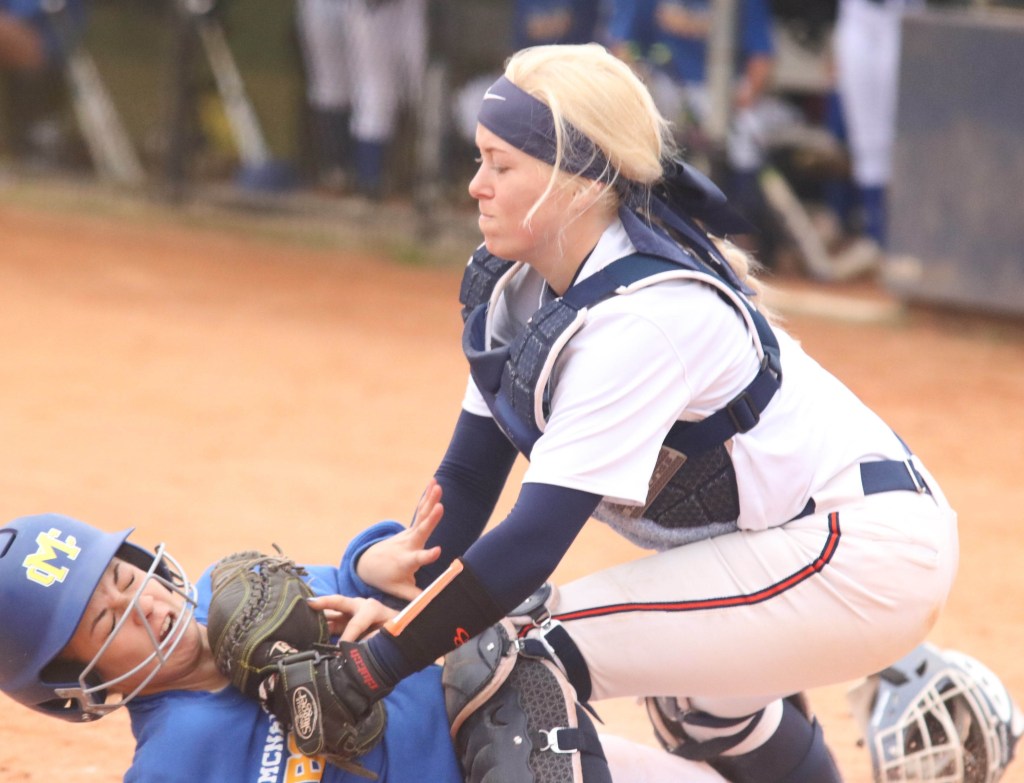 Photo The Charles Henderson Lady Trojans finished day one of the Gulf Coast Classic with a 1-1 record on Monday. Above: Gracie Williams applies a tage on Monday.

The Charles Henderson Lady Trojans kicked off the Gulf Coast Classic with a 1-1 record on Monday morning. The Trojans began the day with a 4-1 loss to McNairy Central after they allowed three runs in the final frame. In game two, Whittaka Lowery sent the Trojan faithful home happy when she hit a walk-off homerun of her own to give the Trojans a 6-5 win over Mortimore Jordan.

The Trojans finished with just one hit and that came by senior Molly Kate Sanders.

Despite the lack of offense, the Trojans took a 1-0 lead in the fourth inning when Graci Williams, who reached via the walk, came around to score on an error by the McNairy pitcher.

McNairy answered in the bottom half of the inning with a run to even things up at one heading into the fifth inning.

McNairy scored three runs on just one hit, a game-winning single. The Trojans walked a batter, hit a batter and committed an error in the inning.

The game took just three innings, but Lowery evened the Trojans’ tournament record at 1-1 with a homerun as time expired to give the Trojans a win over Mortimore.

After finishing up game one, Garrett got the call to start game two for the Trojans. Garrett pitched all three innings and gave up five total runs, three of which were earned on five hits and three walks.

The Trojans finished with three hits. Along with Lowery’s homerun, the Trojans got hits from Kirkpatrick and Tucker Earls.

After Mortimore jumped out to an early 1-0 lead in the top of the first, the Trojans answered with three runs of their own. Kirkpatrick led off the inning with a home run, bringing the Trojans within 2. Three batters later, Earles reached on an error to score Rose Snyder. Lowery drove in the final run with a sacrifice fly to score Earles, bringing the score to 3-1.

Mortimore evened the score at three with two runs in the third before scoring two more in the third to go up 5-3.

The Trojans comeback in the third started with a Garrett walk. Earles followed up with a single to set the stage for the Lowery theatrics.

The Trojans will continue play in the Gulf Coast Classic today when they take on Hamilton beginning at 12:30 p.m.