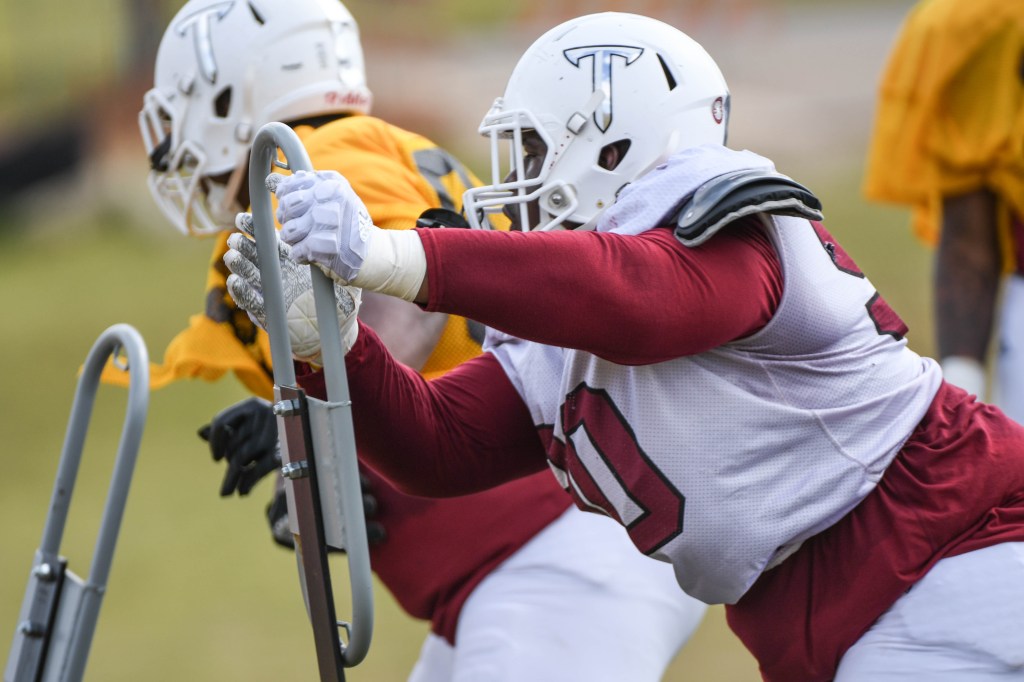 Submitted Photo The Trojans finished in the top 25 defensively last season. They look to climb higher in 2018. Above: Trevon Sanders pushes a sled during spring practice.

The Troy Trojans entered 2017 with the excitement swirling around the offense. Now one week into spring practice, the excitement shifted to the defensive side of the ball.

The Trojans finished last season as arguably one of the top defensive teams in the country. They were top in the nation at red zone defense, seventh in rushing defense, 11 in scoring defense and 24 in overall defense.

“No offense to anybody who played with us as a senior last year, but we felt like we were good, but we weren’t good enough,” Koenning said. “There was one stat that we were number one in the country in and that was red zone, so we have room to improve. We are striving to be great.”

The defense is also striving to be the best unit in the state.

“There are some great defenses in this state,” Koenning said. “We want to try and be mentioned with others as the best defense in the state.”

After the conclusion of the first practice last Tuesday, Koenning believed his defense looked faster and he contributed it to strong recruiting.

“We seem faster,” Koenning said. “We ought to. It’s been three years of recruiting so we ought to be making strides. We have a new building coming in, that’s helping recruiting. We have been winning and that helps recruiting. We are kind of expecting to be better at a lot of different positions.”

The young recruits will have a chance to play this spring due to a number of defensive players either out or limited due to injuries. Hunter Reese, Blace Brown, Melvin Tyus, Justin Whisenhunt, John Hines, Kelvin Lucky and Michael Robinson will all either be out or see limited action this spring.

“We have to learn what the other guys cane do,” Koenning said. “It’s a good opportunity for anybody that’s out there to get better. Spring is about improving the players individually. You’re not going to lose any games in the spring, but you can lose them. We have to do a good job at being smart.”