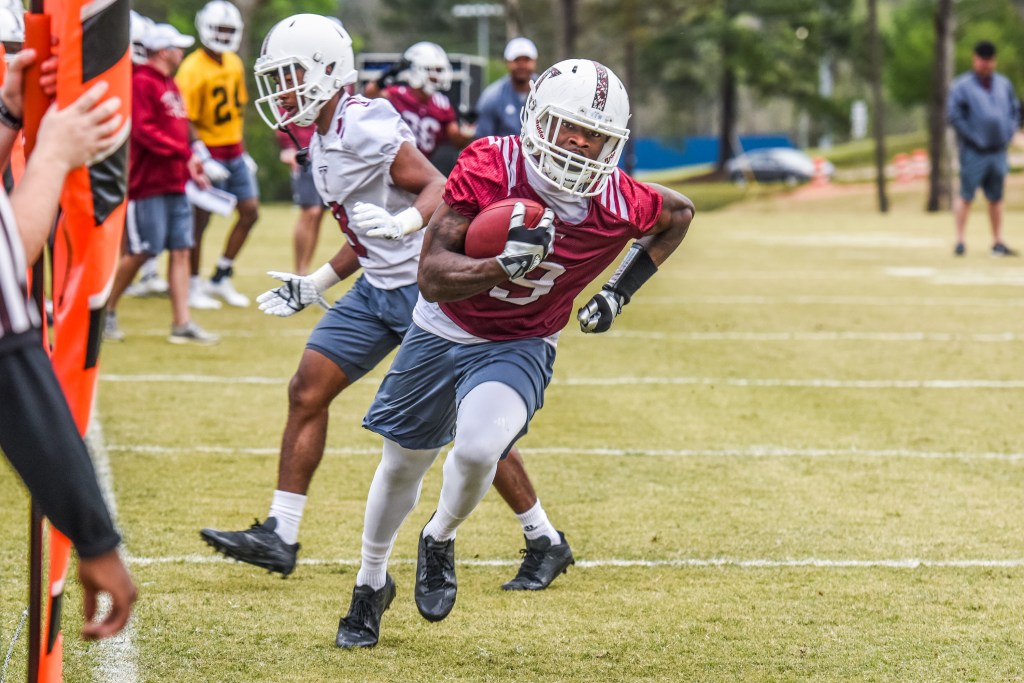 Photo/Jonah Enfinger Jamarius Henderson runs the ball for the Trojans.

Former Troy running backs Jordan Chunn and Josh Anderson are gone and the race to replace the lost carries is starting to heat up.

Chunn and Anderson accounted for 1,278 of the team’s 2,172 yards last season and they combined to score 16 touchdowns.

With the two bell cows no longer on the roster, the Trojans will look to B.J. Smith, Jamarius Henderson and others to handle the load.

Henderson led the two running backs with 366 yards on 45 carries last year, but so far, head coach Neal Brown believes B.J. Smith is currently further along in the process. As a sophomore, Smith rushed for 102 yards on 27 carries and had two touchdowns.

“BJ is a guy that is ready,” Brown said. “I think it’s time for him. He is going into year three. I think he has been one of our better special team’s players. It’s time for him and he is ready to take that next step. He is healthier than he has been. As far as knowledge of the offense, he is ahead of the other running backs.”

Entering his third season with the Trojans, Smith hopes his experience will lead to better things this fall.

“With time comes experience so I feel better going into my third year,” Smith said.  “I’m just looking forward to getting better each and every day. We have a lot of competition in the running back group. That is going to be a good thing.”

The Trojans, along with Smith and Henderson, will add junior college transfer Kevin Perkins.

Perkins rushed for 884 yards on 163 carries last year while at Northwest Mississippi Community College. He comes to Troy with three years of eligibility.

“I feel good about those two guys (Henderson and Perkins),” Smith said. “I feel good with all these guys. We are all well-coached and we compete hard. They play hard and they are hard-nosed.”

The Trojans will also welcome back Jabir Daughtry-Frye, who missed most of last season with a leg injury. In 2016, Frye was the top kick returner in the conference and 11th in the country.

Most of the backfield has had their fair share of position battles going back to last season. Smith believes that competition can only make him stronger.

Quarterback Kaleb Barker, who is in a position competition himself, is eager to see what these running backs will bring come game day.

“I think no matter what happens we are going to be set,” Smith said. “I think we have four or five guys in there that can really run the ball.”

The running backs will have 12 more practices before the annual T-Day game on April 21 to show the coaches and their teammates how much they can contribute.