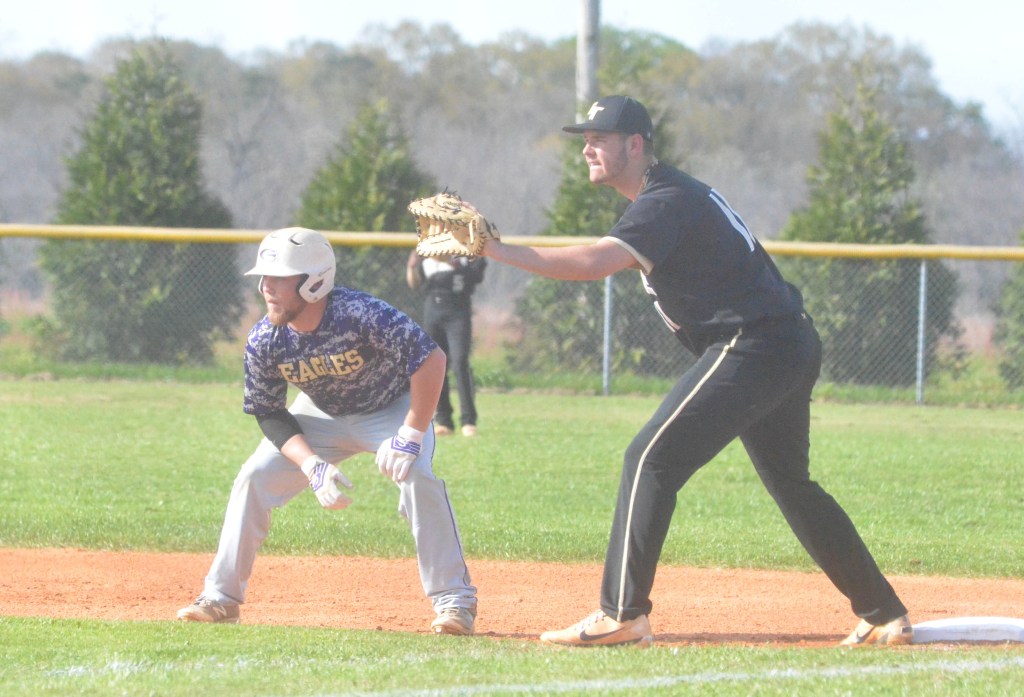 Messenger Photo/Mike Hensley Goshen Eagle Dalton Bunce leads off first base during a game against Greenville on Friday afternoon.

The Greenville Tigers scored five runs over the final three innings to knock off the Goshen Eagles 7-0 on Friday night.

Runs came at a premium until the fifth inning for both the Tigers and the Eagles. After two early runs by the Tigers, both the Tigers starter and Eagle starter McGwire Stanley held the two offenses to just five hits over the next three innings.

Stanley pitched five innings for the Eagles and allowed a total of four runs. He allowed four hits and struck out eight batters.

Brock Snyder came in and pitched the final two innings and allowing a total of three runs.

The Eagles finished with just four hits, led by Brock Snyder who had two. Mitchell Rushing and Stanley each had a hit.

The Tigers jumped on the board with a pair of runs in the first inning. The first one came when the leadoff batter reach base via the walk. A few pitches later the Eagles committed two throwing errors on the same stolen base attempt to allow the Tigers to jump on the board. The final run of the inning came on a groundout.

The Tigers added to their lead with two more runs the fifth when they tallied two singles and a walk.

That would be the final inning for Stanley. With Snyder in the game, Greenville scored their final three runs in the sixth inning when they had two singles, a walk and a hit batter. The Eagles also had two errors in the inning.

The Eagles will be back in action on Tuesday when they host Elba beginning at 2 p.m.