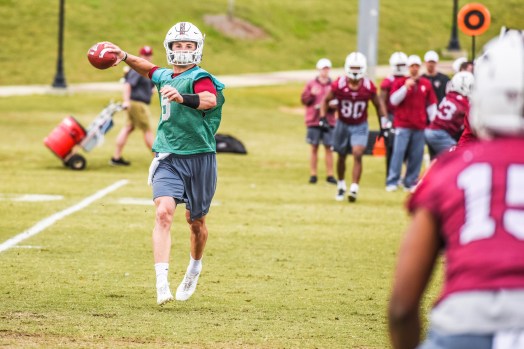 The Troy Trojans entered spring practice with two quarterbacks in Kaleb Barker (8) and Sawyer Smith. The Trojans will hold 14 more practices before T-Day on April 21. 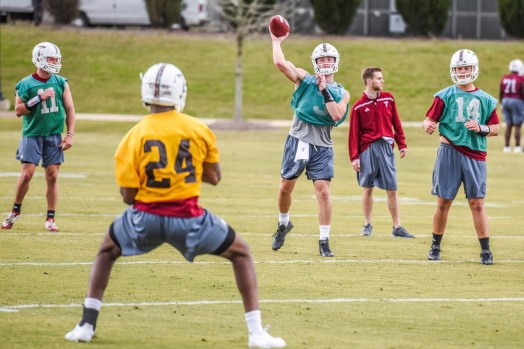 Spring practice has officially started and position battles abound. One position in particular that is sure to grab the attention of Trojan nation is at quarterback as Kaleb Barker and Sawyer Smith vie to replace former gunslinger Brandon Silvers.

The Trojans have had just two different starting quarterbacks take the majority of the snaps over the last eight years, but with Silvers no longer in Troy, Barker and Smith will have a true competition for the top spot.

Getting the bulk of the reps is nothing new for both Barker and Smith. Last spring with Silvers mending a hand injury, the quarterbacks split the reps.

“I was taking a lot of one reps with him being out,” Barker said. “It’s different knowing in my head that I am competing for a spot and not having to worry about Silvers coming back in the fall.”

Barker has the leg up in terms of experience entering this year. Barker completed 8 of his 13 passes last season for 143 yards. Known more for his running capabilities, Barker did have one touchdown pass last year against Texas State.

“I thought I could always throw,” Barker said. “I am more known for my legs because those were the opportunities I was given. It helped me a lot with my confidence moving forward.”

Because of last year’s experience, Barker believes his team has confidence in him and that can go a long way towards his success this season.

“I think it’s a huge deal to have my team have my back,” Barker said. “I don’t ever do it by myself. I can’t do it without my guys behind me.”

Smith took a different route last year. He decided to redshirt and he believes that was the smartest football decision that he has made.

“I think that was the best thing I have done in my football career,” Smith said. “I did coverages during the game. I got to sit back and learn coverages and be in Brandon’s back pocket, getting everything out of him until he got out of here. I have learned so much from Brandon and sitting back being able to watch last year really helped me out.”

Smith wasn’t idle last season just because he was on the sidelines during games. He was in the workout room getting stronger.

“I was in developmental workouts the entire time,” Smith said, “waking up at 5 a.m. doing workouts with coach Horton. I think I gained five pounds doing that.”

Head coach Neal Brown preaches the importance of competition and both quarterbacks feel this particular battle will only make them better.

“Competition can only bring out the best in somebody,” Smith said. “Hopefully we both push each other and both of us get better and better, making it harder for the coaches to make a decision at the end of it.”

“I think it will motivate us both to work hard,” Barker said. “We have been competing. I know I have gotten a lot better physically and mentally. Those workouts push you to the edge and we have just been pushing each other. Whoever comes out on top is going to be the best player.”

On day one of practice, Brown stated he has no timeframe for when the decision will be made.

“I really don’t have a timeframe,” Brown said. “I think both of them have done some quality things in their two previous years here. My opinion on quarterbacks is that you know when you know. It’s usually pretty clear and obvious to everyone. When it’s clear and obvious we will make that decision, but that is not anywhere close to happening.”