Trojans look to improve on the greens this season 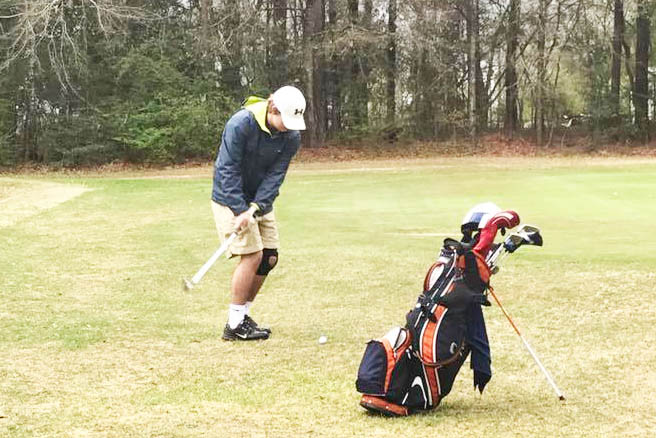 submitted Photo Grant Baker chips just off the green. Baker and the Trojans are four matches into their 2018 season.

The Charles Henderson High School team competed in their fourth match of the season in Andalusia on Monday afternoon. In their first three tournaments of the season, head coach Doug Branson has liked what he has seen.

“We are still young, we don’t have any upperclassmen,” said head coach Doug Branson. “We are just learning how to play golf. The guys are competitive and they are competing right now.”

Even though the Trojans are competing, Branson wants his players to focus on the course and not so much on who they are playing.

“I try to tell them that we are not there playing the guy next to you,” Branson said. “We are competing against the course. We are trying to give us the opportunity to play the best round we can on that course. If we can do that, then we are going to have success. Of course we want to win matches, but in the end we are trying to get better so come playoff time we can compete.”

Branson believes he has two or three players who can shoot in the 80s. His goal is to add a fourth

“Last year, the most we had was two guys in the 80s,” Branson said. “This year, we have already had three guys score in the 80s. Now we just need that fourth guy to score in the 80s and we need them all in the same round. Then we are competitive.”

The short game on and around the greens is what Branson wants to see the Trojans clean up.

“I think right now we are struggling on the greens,” Branson said. “Our putting is not where it needs to be. The good thing about this is that’s something that we can absolutely get better at. We can put more time in and get that going.”

“The Troy Country Club has fast greens compared to some of the municipal courses we play,” Branson said. “That is an adjustment we have to make.”

In Andalusia, the Trojans finished with a combined score of 373. They were led by Brax Barron who shot a 77.