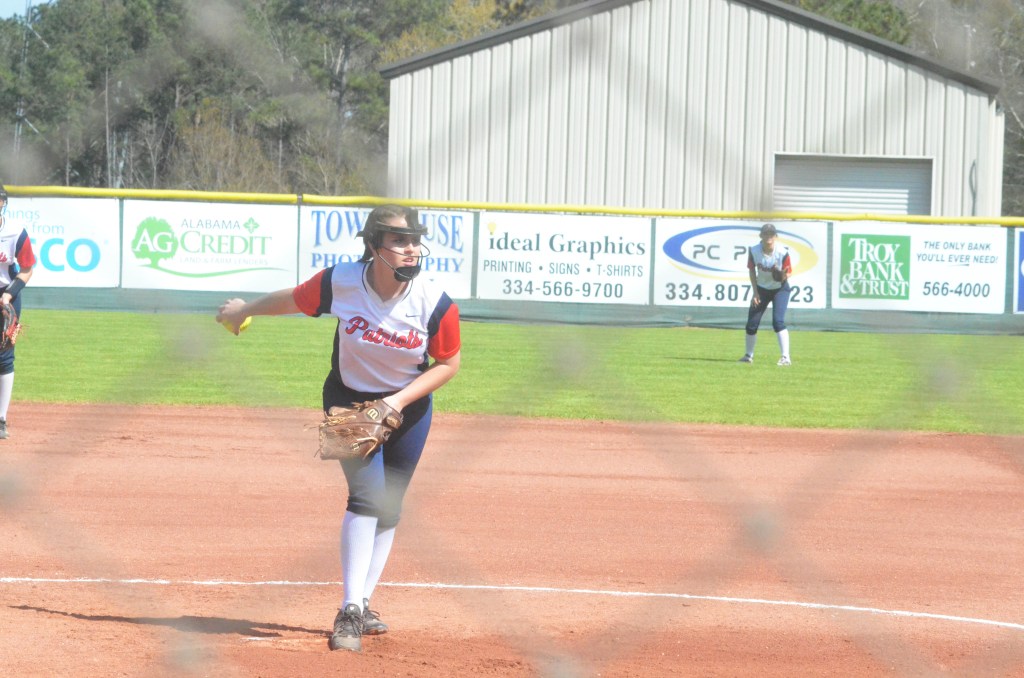 Dannah Dawson and the Pike Liberal pitching staff has a 4.42 staff ERA for the Patriots this season. After entering the season hopeing to improve in the cirlce, head caoch Robert Rollan has been pleased with his pitchers start to the season.

The Pike Lady Patriots entered the season with an expectation that their pitching was going to take a step forward. After a 3-1 record in the Jonah McWaters Tournament over the weekend, the pitching staff showed they are headed in the right direction.

The Patriots had three different pitchers in Dannah Dawson, Morgan Bundy and Ally Rushing throw over the weekend. The three pitchers combined to throw 18 inning innings while surrendering 5 earned runs.

“Our girls are really starting to play good defense and our pitching is starting to get better,” said head coach Robert Rollan. “They are getting more and more confident every game they go out. They are throwing more strikes than they are balls.

“They are getting more control of their pitches. They are making people put the ball in play and they are doing a good job at throwing all their pitches.”

Dawson has posted a 3.94 ERA over her 44.1 innings this season. In the game on Friday, Dawson pitched a complete game shutout against Crenshaw County.

Bundy, who is just a freshman, has also pitched strongly for the Patriots this season despite running into a little trouble on Friday night. She has a 3.00 ERA over her 28 innings of work.

“She pitched Saturday night and struggled when it came to throwing strikes, but she made the people put the ball in play,” Rollan said. “That is the thing I like about Morgan. She is very competitive.”

Rushing is just an eighth grader, but during her 19 innings of work she has pleased her head coach. She has an ERA of 3.31 this season.

“She is the one that has really amazed me this year because she has come in and played on the varsity level in what you would call a setup role and she just throws strikes,” Rollan said. “She makes them swing the bat and she keeps them off balance with her pitches.”

“Not every pitcher is going to have a good day,” Rollan said. “When one is off, it gives you the ability to bring another one in.”

Defense was another area Rollan wanted to see improved this year. So far he believes they have improved and that has been very beneficial to his pitching staff.

“The pitcher knows that even though she makes a mistake and the ball is hit we are going to make an out,” Rollan said. “This biggest thing for (the pitcher) is that she knows her team has the confidence to make plays for her.”