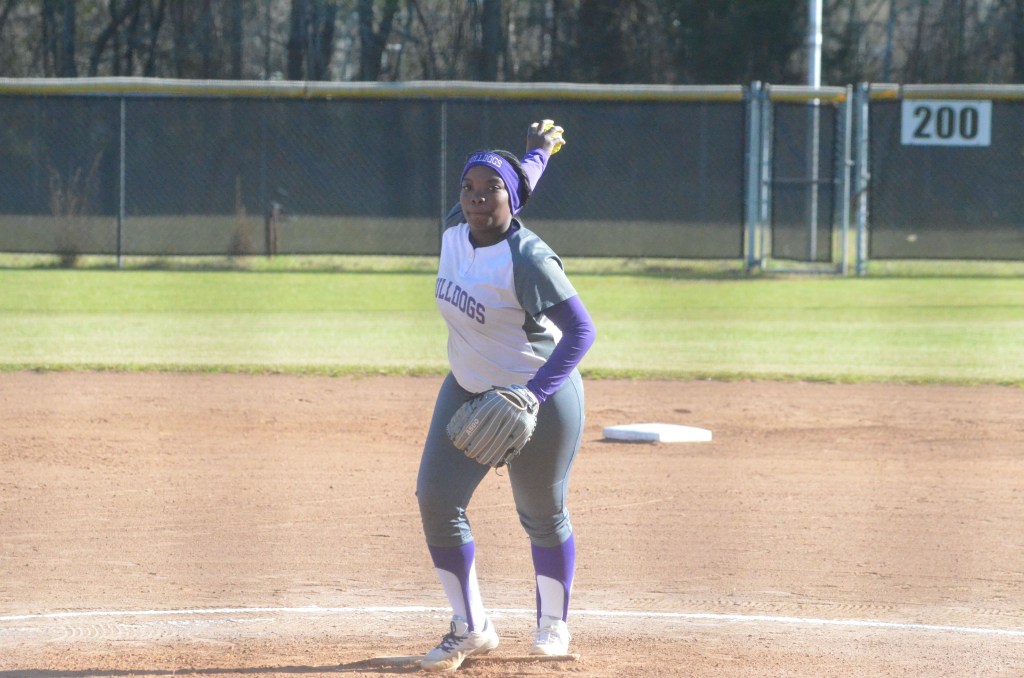 Senkethia Thompson delivers a pitch for Pike County on Tuesday night against Houston Academy. Thompson and the Bulldogs fell to the Raiders 16-0.

The Pike County Bulldogs allowed at least a run per inning in their 16-0 loss to Houston Academy on Tuesday afternoon in Brundidge.

Two out runs and homeruns played a big role in the Bulldogs loss on Monday.

In the first two innings of play the Raiders scored four of their seven runs with two outs in the inning.

Sentkethia Thompson got the start for the Bulldogs in the loss. The Bulldog pitcher lasted four innings and gave up all 16 runs. She also allowed 15 hits.

Aubrey Maulden came in and pitched the final three innings of the contest.

The Bulldogs reached base just twice on the afternoon and both came via the walk by Anna Price and Destiny Flournoy.

The Bulldogs fell behind 4-0 before being able to come up and hit. In the top of the first the Raiders picked up two singles, a walk, a hit batter and one player reached safely thanks to an error. The Raiders scored three of their four runs with two outs in the inning.

The Raiders earned a comfortable lead when they scored three more runs in the top half of the second inning. They had two straight singles to start the inning. Their first two runs came around to score on a groundout and their third came in to score on a double to bring the score to 7-0.

The Raiders added to their lead with two more runs in the third before including the long ball in the fourth. Trailing 9-0, Thompson allowed four more runs, two of which came on a two-run homerun to put the Raiders up 13-0.

The Raiders hit their second home run of the night in the fifth, in what was a 3-run inning for the Raiders to close out the scoring.

The Bulldogs will be back in action on March 20 when they travel to take on Carroll.