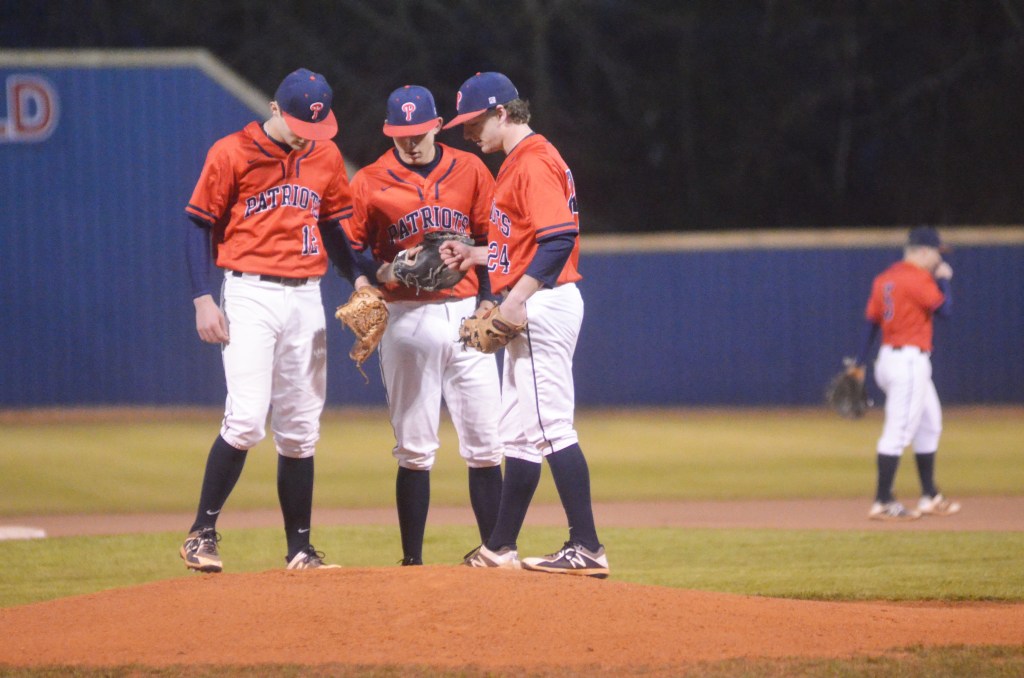 Pike pitcher Wood Jinright (24) talks with his infielders during their game on Thursday night against Ezekiel Academy. The Patriots defeated Ezekiel 13-2.

A six-run sixth inning propelled the Pike Patriots in a 13-2 win over Ezekiel Academy on Thursday night in Troy.

The win for the Patriots improves their overall record this season 12-0.

“We’ll take it,” said head coach Allen Ponder. “We came out flat. At the same time, we had some positives. We had some guys that have been struggling at the plate to find some barrels. In games like that, you always search for positives and the biggest positive is the win and we’ll take it.”

Wood Jinright got the call as the Patriots starter. The senior threw all 5 innings of the shortened contest. He allowed two earned runs on seven hits and one walk, while striking out two batters.

“Every time we put Wood on the mound we know what we are going to get,” Ponder said. “He is going to compete, he is going to pound the zone and he is going to pitch to contact. We just have to do a good job at playing defense and we did that tonight.”

The Patriots finished with 10 hits led by Nate Renfroe, who went 3-3 at the plate. Reed Jinright, Wood Jinright, Max Copeland, Cole McWhorter, Jade Sikes, Trevor Barron and Holt Steed each had a hit.

The Patriots scored the game’s first run in the bottom of the second when Renfroe came in to score on a balk call.

The Patriots put the game out of reach in the third inning when they scored six runs on three hits to take a 7-0 lead. McWhorter tripled to score both Cody Hollis and Wood Jinright to put the Patriots up 3-0. They also got an RBI triple from Renfroe in the inning.

After the Knights got on the scoreboard with a homerun in the top of the fourth, the Patriots answered with six more runs in their half of the fourth inning.

A Steed double cleared the bases scoring Renfroe, Sikes and Barron to put the Patriots up 10-1. Reed Jinright followed suit with an RBI single and Copeland closed out the inning with an RBI double.

The Patriots will take their undefeated record into the Jonah McWaters Tournament, which begins this morning beginning at 11 a.m.

“We get excited about our tournaments,” Ponder said. “We always have good crowds. We are supposed to have good weather. We are excited about it. We enjoy the opportunity to play multiple games.”

The Patriots’ first round opponent will be Crenshaw.