Going for three: Trojans excited to begin their run towards another possible Sun Belt Conference title 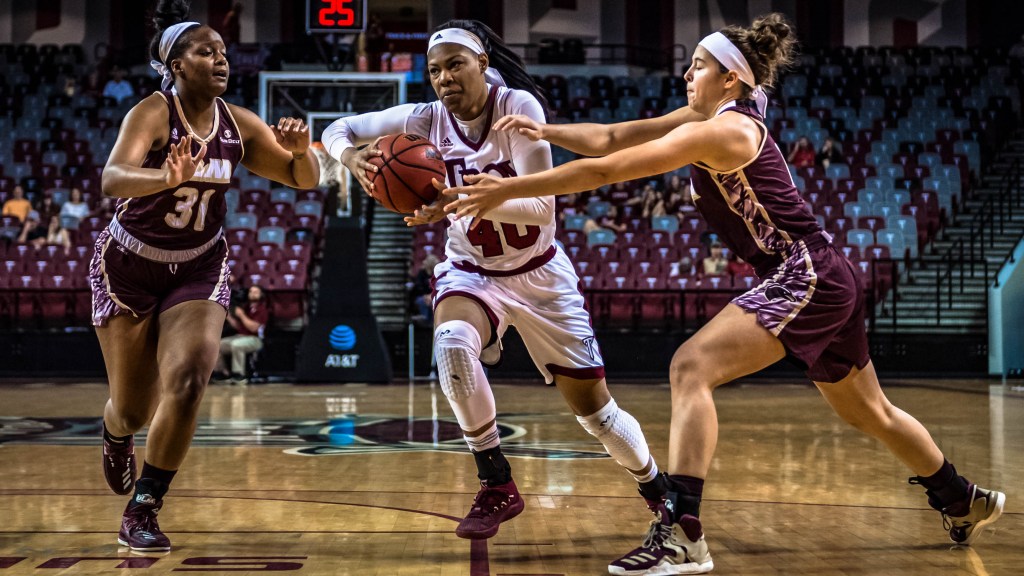 Amber Rivers drives to the basket in a game earlier this season. Rivers and the Trojans will begin play in the Sun Belt Conference Tournament th is afternoon against South Alabama beginning at 2 p.m.

The Troy women’s basketball team begins their run at a third straight conference title when they take on South Alabama in the second round of the Sun Belt Conference Tournament this afternoon.

The Trojans (17-7, 12-6) have advanced to two straight NCAA Tournaments after winning the conference crown, and head coach Chanda Rigby lost sleep in anticipation of making it three in a row.

“I am extremely excited,” Rigby said. “Our theme for the year was ‘repeat to threepeat.’ We have had an awful lot of challenges come our way this year.”

“We are extremely young and extremely thin heading into this tournament,” Rigby said. “Our mindset is right and our talent level is good enough. It’s going to be interesting and exciting to navigate this tournament.”

The Trojans entered the tournament as the four seed and will match up with the in-state rival Jaguars after they knocked off Louisiana-Monroe in round one on Tuesday.

“All we are concerned about is this first game,” Rigby said. “If we can get by the first game, I think it will kick in the culture that these kids have been engrained in.”

The Trojans will rely on the returners to help lead the way on Thursday.

“The heart of our team and the class that we are relying on is our sophomores,” Rigby said. “They are the ones that are returning and putting up numbers for me.”

Sophomores Robinson and Rivers were named All-Sun Belt Conference Second Team, while Holmes was selected as the league’s Newcomer of the Year.

“I am so thankful and so proud of them for that,” Rigby said. “Kayla Robinson and Amber Rivers making All-Conference Second Team, again if you look at that, I think everyone (else) on the first team were seniors. They are young and they are getting it done.

Those sophomores, along with Harriet Winchester, will be looked at to perform at a senior level in the tournament.

“The heart of our team and the class we are depending on is the sophomores,” Rigby said. “They are the ones putting up numbers for us. Kayla Robinson was three-time player of the week, which was the first time that has happened. Amber Rivers is arguably one of the best post players in the Sun Belt Conference. Harriet Winchester is a scorer as well. Those three, we are putting senior expectations on them.”

The Trojans finished off the regular season winning 8 of their final 10 games and 4 of their last 5.

The Trojans and Jaguars will begin play at 2 p.m. today at Lakefront Arena in New Orleans.