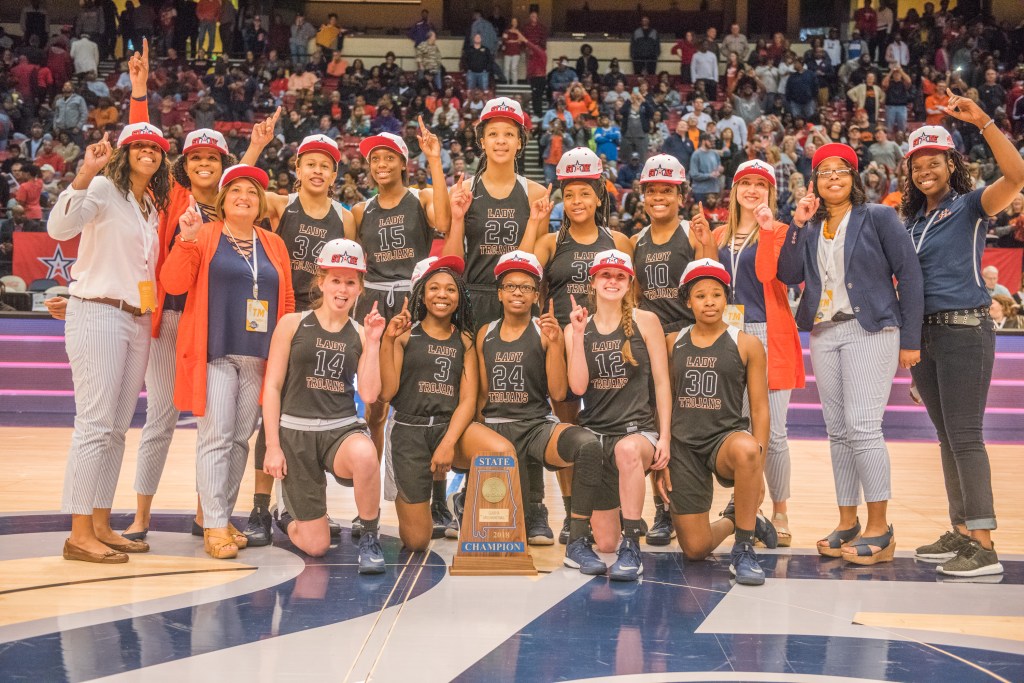 Messenger Photo/Jonah enfinger The Charles Henderson Lady Trojans celebrate with their trophy after winning the Class 5A state championship on Saturday morning in Birmingham.

With the clock nearly at zero, Charles Henderson Trojan head coach Dyneshia Jones gathered her players for one final huddle before knocking off Central-Tuscaloosa 55-37 for their first ever state championship.

“I told them this is part of history,” Jones said, “that I have enjoyed them and that I love them. I am proud of the way they worked hard for it.

The run at a championship was three years in the making for the Lady Trojans. In 2016, the Trojans ran into Wenonah Dragons in the semifinals and fell 53-51. Last season, in the rematch, the Trojans once again fell to the Dragons 55-52 in the state championship.

The Trojans got the better of the Dragons this year 57-53 to set the stage for the Trojans’ second straight title game appearance. This time around, the Trojans finished the job.

“It’s an amazing achievement,” said Niaira Jones. “We have been wanting this all year. We worked hard for it.”

“Last year we were all crying (after the loss),” said Tatyana Siler. “This time if just feels amazing.”

It was a sloppy start for the Trojans during the first quarter of play. The Trojans had six turnovers before the first media timeout with 4:00 remaining. They finished the quarter with seven turnovers and a shooting percentage of merely 11 percent.

“We were a little out of whack, but it was nothing that we couldn’t fix,” said Maori Davenport.

After going into the second quarter down 8-4, the Trojans closed out the first half on a 6-0 run and took their first lead of the game at 10-8 and went into halftime holding a 20-15 lead.

After a sluggish start to the second half, the Trojans found themselves down 22-20. They closed out the third quarter on a 17-4 run and went into the fourth holding a 39-24 lead.

The Trojans were able to control the pace of the game in the fourth quarter and held on to the comfortable win.

The Trojans got their usual production out of Davenport, who led all scorers with 17 points and had 13 rebounds. Tatyana Siler had 14 points and Jones had 11.

The Trojans also got production from Nala Baker, who had 7 points, 4 rebounds and 5 assists.

“(She’s a) sleeper,” Dyneshia Jones said. “She knows her role. I am so happy she moved here. She has improved tremendously as far as her knowledge of the game. She is a great listener and willing to learn.”

Siler, Jones and Davenport were all named to the all-tournament team with Davenport claiming MVP honors.

After winning this year’s championship and the core group coming back, the Trojans feel confident they will make the return trip next year.

“I am very confident,” coach Jones said. “I was confident last year. I am happy they are juniors and sophomores. Another year we will be back. We are going to work hard to get back here. Our plans are to be back here again.”