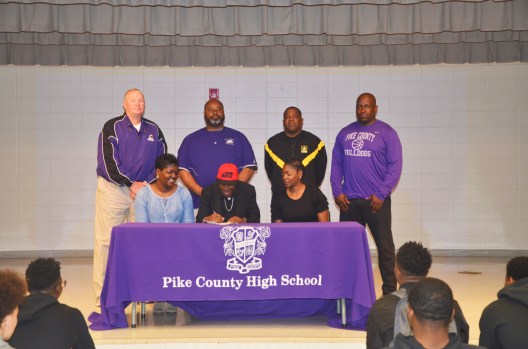 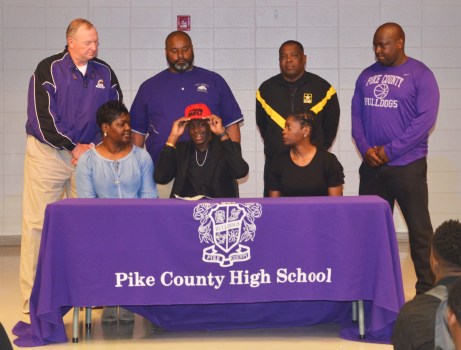 Pike County High School head football coach Fred Holland regularly talks about culture, leadership and hard work when speaking about his program and the players who make it up.

One player who epitomized leadership and hard work had his dream come true on Friday morning.

“It takes a lot of hard work to get to where Jahzarian is at,” said Holland. “I am really proud of him. He is one of the players that really accepted what we were doing.

One of things that Lampley accepted was the fact that Holland was going to use his talents all over the field.

“We used him in a lot of different positions. I think last year we used him at defensive back and he never complained. No matter how bad things got. He was always willing to step up and do the things we needed him to do. He excelled at everything that we needed.”

Although Lampley will be playing football in Lakeland, the senior also excelled on the basketball court at Pike County.

“It’s been a blessing,” said head basketball coach Doug Holland. “I text him all the time telling him how proud I am that he is going to continue his education. That’s what it’s all about. I want to say I’m proud of him. I wish him success in all that he does.”

On Friday, Lampley was joined by his fellow teammates, coaches and family when he officially put pen to paper.

“I just want to thank God,” Lampley said. “It’s a blessing to have to come where I came from. Progress is all that I am looking for.”

Lampley grew up playing with many of the people in attendance. Pike County football has always been about one thing for Lampley.

“I grew up playing with them so it’s always been a family thing,” Lampley said. “I look up to them (Doug and Fred Holland). They are big role models in my life.  They helped me along the way to success.”

Lampley doesn’t yet know what side of the ball he will play on with the Fire, but there are few things he knows he needs to improve on before his freshman sxeason.

“Elusiveness and I want to become more aggressive,” Lampley said.