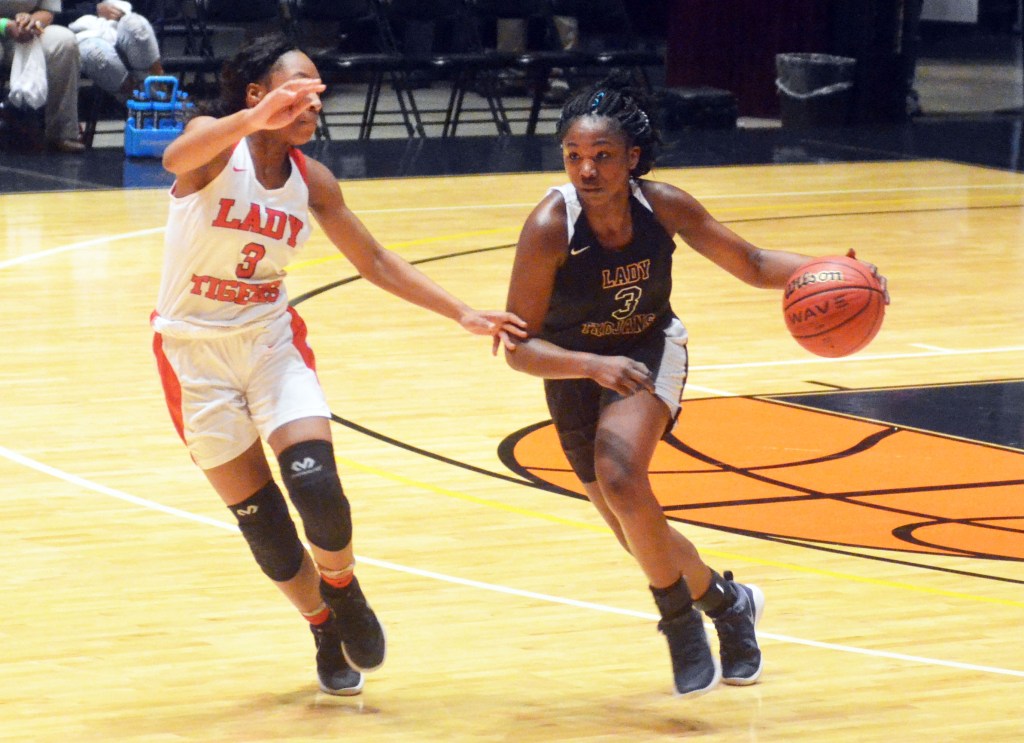 Niaira Jones tries to dribble by a Eufaula defender. The Trojans knocked off the Tigers 58-37.

The Charles Henderson Lady Trojans are heading back to Birmingham for the Class 5A State Tournament. For head coach Dyneshia Jones and the Trojans, they hope the third time will be the charm.

The Trojans defeated Faith Academy 36-22 last Wednesday to secure their spot in Birmingham, where they will play Wenonah Wednesday for the third consecutive season. The Trojans have lost to the Dragons in each of the last two meetings.

“We have been here,” Jones said. “We know what it feels like to make it to state. Now our goal is to win state. They (the players) are excited, but they are humbled and they know what they have to do to win.”

Despite winning the regional championship, the Trojans left the floor showing little excitement with one goal left to be accomplished.

“We are excited on the inside, but we have been here so many times and we have been to state and lost,” said Niaira Jones. “We are looking forward to one thing. This is just a step to that.”

Two seasons ago, the Trojans fell to the Dragons in the semifinals 53-51. The two teams met in the championship last season and despite a record-breaking performance by Maori Davenport, the Trojans again fell 55-52.

The Dragons have beaten their opponents by an average of 20 points since the sub-regional round of the playoffs. They are coming off a 57-41 win over Lee-Huntsville in the region championship. Despite another tough matchup with the Dragons, Davenport is looking forward to the challenge.

“I think the game is going to be tough, but I think we can win,” Davenport said.

The difference between this year and the previous years according to forward Tatyana Siler is that this team simply wants it more.

“We have been so many times that now we want it more,” Siler said. “All the other times don’t matter. This is what matters now.”

For coach Jones, it all comes down to experience.

“They are more experienced,” coach Jones said. “We have been there. We have a goal. We worked hard this summer and we played a lot of great teams throughout the season and I think they are ready. We are focused. We have to play them first, I know we have a step after that, but we are going to get them.”

Siler injured her eye in the regional semifinals against Eufaula. Siler used that as fuel to get through not only that game, but against Faith. She plans on playing with attitude this time around against the Dragons.

“What really motivates me is my eye,” Siler said. “I liked the toughness they played with. I am going to have to play that way against them (Wenonah), because that really angered me. I play good when I’m angry.”

The Trojans and Dragons will look to secure a berth in the championship when they begin play at 3 p.m. on Wednesday.