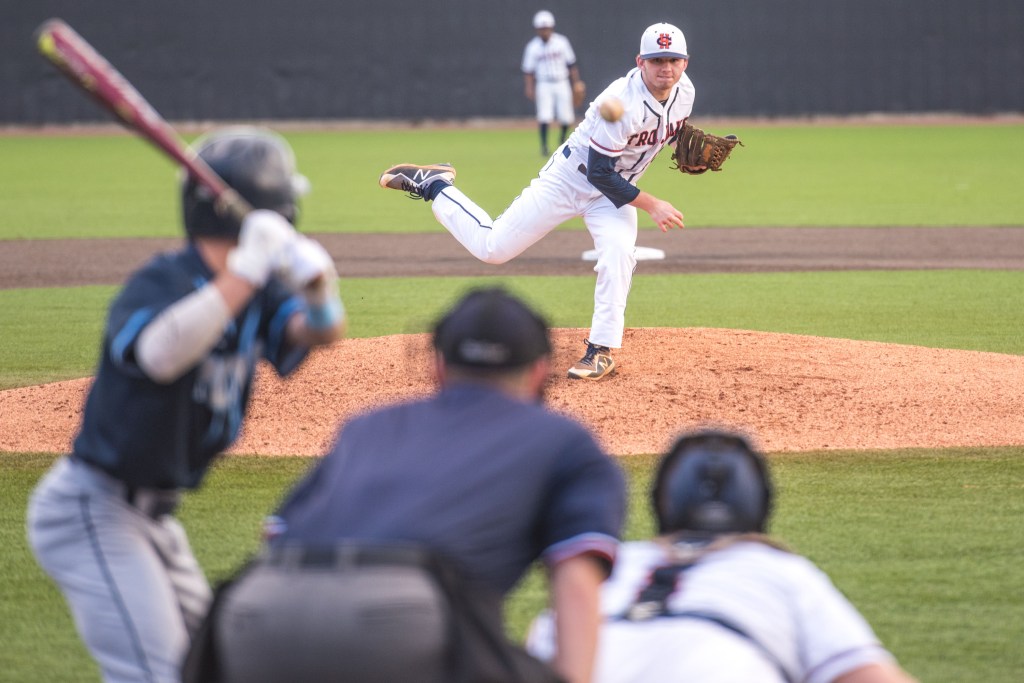 The Charles Henderson Trojans began play in the Terry Sikes Tournament on Friday evening at Riddle-Pace Field. The Trojans began the tournament 0-2 after falling to Pope and Wetumpka.

The Charles Henderson Trojans hosted the annual Terry Sikes Tournament at Hogan’s Hole and Riddle-Pace Field on Friday evening. The Trojans began the evening with a 10-0 loss to Pope and finished the night with a 9-4 loss to Wetumpka.

The two losses for the Trojans leaves them still in search of their first win after starting the season 0-5.

Over the course of the two games it was a tale of two bad first innings. In both games, the Trojans let up a combined 12 runs in the opening inning.

“We just made some errors,” said acting head coach Sam Kitchens. “We got down in the game both times. The kids in this game (game2) battled back and I was impressed with the effort we put into it.”

Things did not start off well for Trojan pitcher Payne Griffin in game one. The starting pitcher was only able to get one out in the first inning before being pulled. Pope got to Griffin for a tone of 5 runs on two hits and five walks. Right hander Anthony Gurba came in relief and was able to get the Trojans out of the inning.

Gurba pitched flawless baseball for the next three innings. He allowed just one hit and threw just 36 pitches during the second, third and fourth innings.

In the fifth the Greyhounds caught up with him. The first three batters reached on a pair of singles and an error. By inning’s end the Trojans fell behind 7-0.

Jackson Giles came in in the sixth inning and allowed three more runs on two hits and three walks to put the Trojans don 10-0.

The Trojans failed to produce a run in the bottom half of the inning ending the game after six.

The Trojans finished with just two hits a single by Gurba and a double by JB Sanders.

It was the same start in game two for the Trojans. Wetumpka scored seven runs in the first before the Trojans starter Caden Bryan could get the first out the game.

Game one starter Griffin came in in relief and put out the fire, but the damage had been done.

The Trojans scored their first run of the afternoon in the bottom half of the first when Keontae Brantley doubled in Sanders bringing the score to 7-1. Brantley was thrown out at third trying to stretch the double into a triple.

Griffin pitched the Trojans into the fourth inning when Jaylen Deveridge took over on the mound. Griffin didn’t allow a run or a hit in his three innings of work.

Wetumpka added two more runs on the board in the fourth. Both runs came on a two-run double down the left field line, bringing the score to 9-1.

The Trojans tried to inch a bit closer in the fifth. Chance Pollard hit a double down the left field line scoring Griffin Payne from second base bringing the score to 9-2.

Brantley followed suit with a double of his own on a hit that sored over the left fielder’s head scoring Sanders to cut the Trojans deficit to six at 9-3. The Trojans still weren’t done. Brantley came around to score on a dropped third strike making the score 9-4 heading to the sixth inning.

That was as close as the Trojans would get. They will continue play in the Terry Sikes Tournament this morning when they open up against Bibb County at 11 a.m.