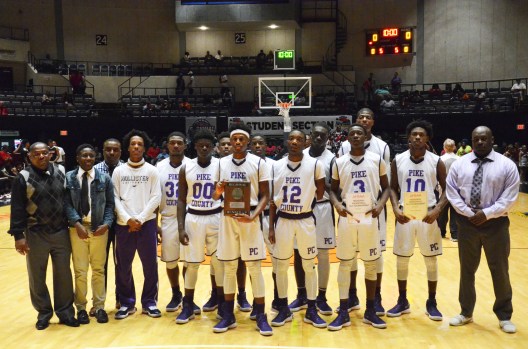 Turnovers hurt the Pike County Bulldogs in a 67-42 loss to the Hillcrest-Evergreen Jaguars in the Class 3A Southern Regional championship Wednesday afternoon in Dothan.

The loss for the Bulldogs brings their season to a close.

“We knew coming in they were going to be one of the most athletic teams we have faced,” said head coach Doug Holland. “They are very well coached. In the first half we had 18 turnovers. Any time we turn the ball over that much, we are not going to have a very high success rate.”

The Bulldogs turned the ball over 29 times and shot just over 25 percent, paving the way for the lopsided defeat.

“They do a good job,” Holland said. “We watched the film they have done a good job all year trapping people. They are so long and athletic and they are strong. Last year they played a lot of zone. This year it was full court man. It can wear you down with limited players off the bench.”

The Bulldogs led for the majority of the first quarter. It took until the 4:56 mark of the first quarter before they were able to get on the scoreboard. Their lead didn’t exceed three points in the quarter and the Jaguars climbed their way back to take their first lead with 1:50 remaining in the quarter. By quarters end the Jaguars held a 15-7 lead.

Both teams didn’t shoot the ball that well in the opening half. The Jaguars shot 29 percent, while the Bulldogs knocked down 25 percent of their shots.

The Bulldogs turned the ball over a total of 18 times in the opening half compared to just five by the Jaguars. The Jaguars had just 4 points off the Bulldogs turnovers.

The Jaguars began the third quarter on a 16-0 run before Andres Burney sunk a free throw with just over 4:00 remaining in the quarter.

The Bulldogs were outscored in the quarter 23-7 and went into the fourth quarter trailing 53-24.

The Bulldogs went on a 10-0 run in the fourth quarter, but couldn’t mount a comeback large enough to regain the lead.

Markis Harris led the Bulldogs with 10 points, while Andres Burney finished with 8 and Elisha Green had 6.