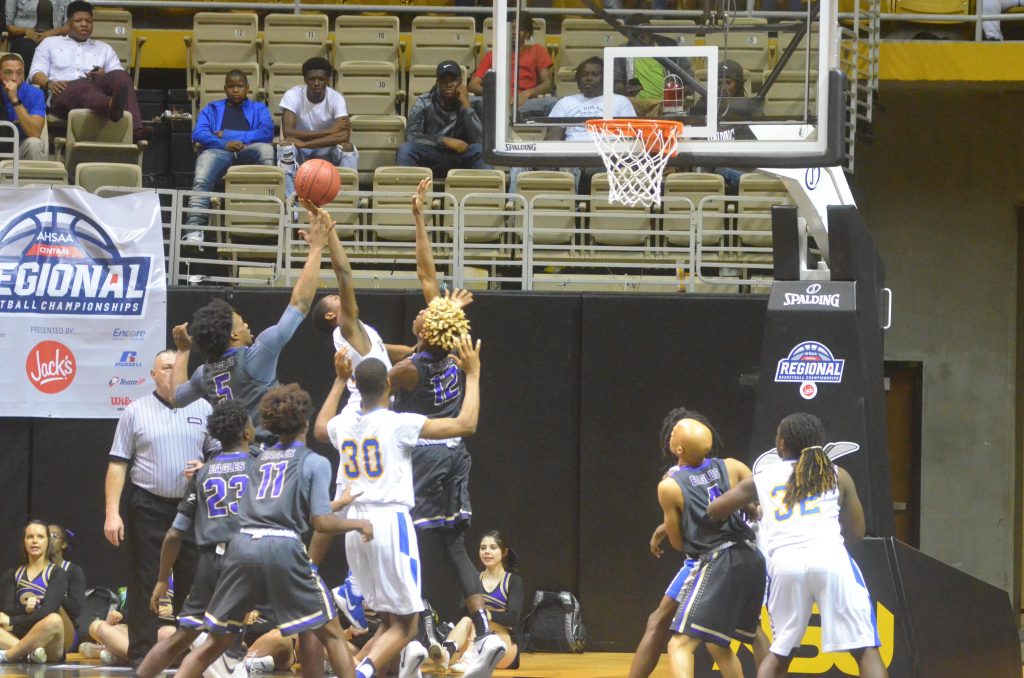 Goshen defenders swarm a Keith player in an attempt to stop a shot on Friday in a 61-57 overtime heartbreaker that ended the Eagles’ title hopes. Goshen led by as many as 18 points in the first half and did not lose the lead until the mid-fourth quarter. Head Coach Ethan Carroll said turnovers, lack of rebounding and complacency led to the loss for his team.

The Goshen Eagles once led by 18 points in the second quarter of the regional semifinals Friday, but four quarters weren’t enough to decide who would be moving on to the next round.

The Keith Bears outscored the Eagles 8-4 in the extra session to win 61-57 ending Goshen’s season.

“We got outrebounded tremendously,” said Eagles head coach Ethan Carroll. “We were up 20-3 on them in the first quarter. We got complacent and that is what happens to teams that get complacent. They outworked us and outplayed us.”

The Eagles got outrebounded by three at 41-38. The Eagles’ 26 turnovers also played a role.

“We got complacent and didn’t protect the ball,” Carroll said. “Any team that turns it over like we did tonight doesn’t deserve to win.”

The Eagles fell behind first 2-0, but from there embarked on a 11-0 run to take an 11-2 advantage in the first quarter.

The Eagles led by as many as 12 points in the quarter led by Zack Alford and Michael Hollis, who combined to score 8 points. The Eagles took a 15-3 lead into the second quarter.

The Eagles scored the first 6 points of the second on two 3-pointers by Hollis and RaQuan Martin putting the Eagles up 21-3 forcing the Bears to call a timeout.

Keith answered the call in the second quarter, outscoring the Eagles 20-12. The Eagles went into the half holding a 27-23 lead after once leading by 18 earlier in the quarter.

The Eagles shot 44 percent in the opening half compared to 32 percent by the Bears.

Hollis led the Eagles in the opening half with 9 points while Martin had 8 and Alford had 6.

The Eagles started the third quarter with back-to-back 3-pointers by Hollis and Martin to extend their lead back to 10 at 35-25.

By quarter’s end, the Eagles led by seven at 39-32 heading into the final quarter of play.

The Eagles struggled to hold the ball all night long, and in the fourth quarter it caught up with them. After a traveling call on Hollis, the Bears went down the floor and buried a 3-pointer, evening up the score for the first time since it was 2-2.

The Eagles scored the next 5 points on a clutch 3-pointer and a layup by Alford after driving the lane to put the Eagles up 46-41 forcing a Bear timeout with 4:39 remaining.

The Bears knocked down a 3-pointer with 1:15 remaining to go up by 2 points.

Alford had the biggest basket of the game up to that point to even the score at 53 with less than 20 seconds remaining in regulation.

The Eagles had a chance to battle back in the final minute of overtime, but fell short.

Martin led the Eagles with 20 points in the loss, while Hollis had 15 and Alford had 12.

“I love these seniors,” Carroll said. “It’s unfortunate, but it’s the way it goes sometimes.”