Eye on the prize: Eagles ride into regionals with unfinished business 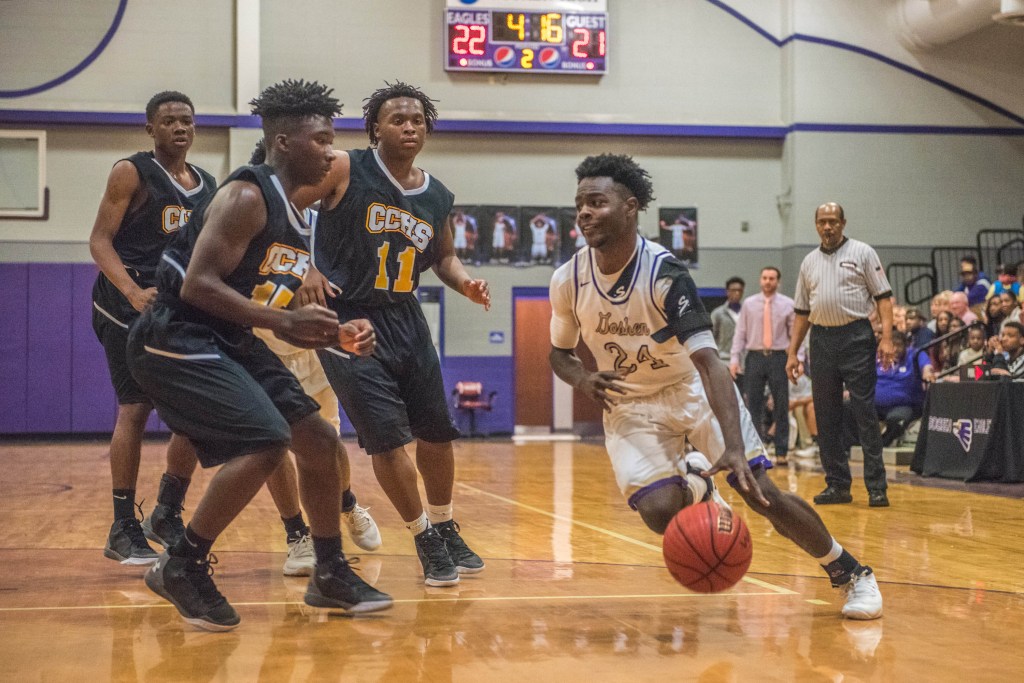 The Goshen Eagles make the trip to Montgomery today for the Class 2A Regional Semifinals. It marks the third straight year the Eagles have played in Montgomery. Above: Zack Alford dribbles around a defender during Goshen’s game against Choctaw County on Tuesday.

The Goshen Eagles will play in the regional semifinals for the third consecutive year this evening when they take on Keith in the Dunn-Oliver Acadome in Montgomery.

The Eagles will be riding into Montgomery with unfinished business. Two years ago, in head coach Ethan Carroll’s first year, the Eagles came within one point of advancing to the Final Four after the game went into overtime. Last year the Eagles fell in the round of 16 to Hatch.

“We have a lot to prove, but at the same time, we need to play within ourselves and take it one game at a time,” Carroll said.

The Eagles returned every player off last year’s squad and, with those players, Carroll hopes they have learned something from their last two defeats in Montgomery.

“The biggest thing is the stage,” Carroll said. “It’s easy to get into a game with that much on the line and overdo things as far as yourself as an individual player. Don’t do too much and know your role.”

The Eagles have had steady production from Michael Hollis and Zack Alford. Recently they have had contributions from bench players such as Brock Snyder and Dante Dawson.

The Eagles pulled out a relatively comfortable 75-48 victory over Choctaw County in the sub-regionals, but the Eagles had to win back-to-back overtime games to get there. Carroll hopes playing in those games will help prepare them.

“It’s important,” Carroll said. “It hasn’t been good on my heart, but we have been in a lot of close games. I am hoping that is going to help. From a mental standpoint, being a seasoned team tends to help and go a long way when games are close.

“The thing I am most proud of with this team is that they fight. It’s been proven to pay off more times than not.”